No One Cares What I Had for Dinner Before the Opera

It feels like it's been years since I had a nice dinner out. "Nice" defined as not a chain, but instead inventive, devoted to modern-day food -- which frankly can be an expensive risk. So, with apologies to my husband who treated me to a nice steak dinner at a chain the night before, I really enjoyed my meal before the opera at Big Sky Cafe.

But, like the opera, I enjoyed one half more than the other.

I elected to have two "small plates," and they were both entrees and I don't care. This was not like the day I got out of the hospital on steroids and I went to Uncle Bill's Pancake House and ordered two entire platter entrees for myself. (The waitress even objected and I did it anyway, and I ate it all.)

Before the opera, I got scallops, which were perfect. Little bites of melty sea-butter. 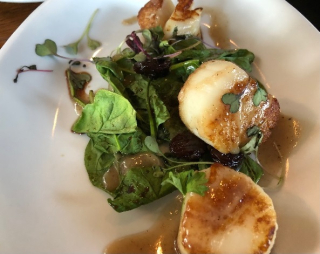 In addition to the safe scallops, I odered one daring thing: Pork Cheeks. I keep referring to them in my mind as Pig Jowls, but the menu said Pork Cheeks.

I was expecting something fatty, like Pork Belly, or something I couldn't even imagine (Pig Face? Pig skin Bacon ? Snoots?), but it ended up being something that resembled Beef Pot Roast so much in taste and texture that I had to ask the waitress if I got the right order. 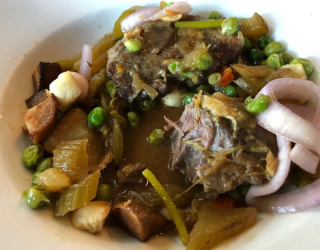 Friend Anne had a very melty crabcake and, I believe, wasted her second gamble on field greens.

Now that I've given my opinion, I'm safe from influence and I can look up reviews of Big Sky Cafe. It would be astonishing if anyone disagrees with me.

Posted at 08:19 AM in Miscellaneous Mockery | Permalink