Last week I had to find something to wear to the opera. It was almost an impossible task. From Wednesday through Friday I was shopstipated, and then on Friday the floodgates opened and I bought like mad.

Wednesday, everything looked adequate. Not special. I kept seeing things that would be great for work, until I touched them, and then the rubbery polyester made my skin crawl. I bought three work-worthy natural fiber blouses, but nothing special that said, "I made an effort for the opera."

Thursday, I gave up on my mall on the rural side of the Missouri to one closer to the city (West County). Salesladies would ask if they could help, and I would either touch some polyester and shudder, or I would shake my head and say, "I think I'm in the wrong store." Truly, I would go into a store to discover the demographic had changed from opera-lover to pot farmer. Nordstroms was particularly jarring: all shabby linen shorts.  I saw a few things that might have been nice, but instead in this on-line age it seems stores want to display their clothing in the same fashion you would see it in an Amazon box: wrinkled and wadded up.

Friday, though, I got my act together, and I knew where to go and what to say. "Floaty, with sleeves, for the opera." I had done some pre-shopping and found a kimono at Anthropolgie, a store I had only ever gone into as far as the first price tag. I then had a purpose: find all the kimonos at the Galleria (even closer to the city), test the limits of "One Size Fits All," and then coordinate from there.

After I scooped up three kimonos, linen pants, plus seven work-worthy bras, tanks, and blouses, I was set for the opera season.

Did I have on last-minute beer goggles on Friday? Not sure. We shall see in a few weeks when I attend the Opera in these pants (they're linen, so picture them bunched up around my knees). 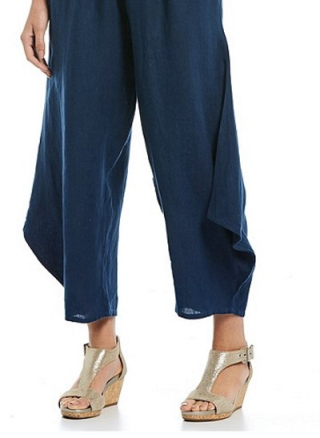 I will pair them with the thirty-four year old silk Kimono from my trousseau, and a tiara, because the opera is the Coronation of Poppea.

Posted at 08:52 AM in In Which We Mock Ourselves | Permalink