A few weeks ago, I found a day-old pastry on the break table at work. I ate it, because the diet I have stuck to for three years has been impossible to follow the last few months.

Even a day old it was the best pastry I have ever had. I immediately set out to find where it came from. One department-wide email later I found that it came from Comet Croissanterie and Creamery in Kirkwood. Take a normal pastry and make it more flaky and laminated, and then toast it or deep-fry it or something to make it extra-crispy. I became intent on having another, because this was no normal pastry.

Attempt 1: This place is in Kirkwood, and happily the next Saturday I was in Kirkwood picking someone up from the train station. I was early, and I set off to get to the Croissanterie on foot, but I realized I couldn't get there and back in time for the train.

Attempt 2: The next day, I had all but convinced Gary to go there, but then he balked at going to Kirkwood, 24 miles away.

Attempt 3: The next week I traveled there specifically, and I was three miles away when Siri alerted me they would be closing in two minutes. 48 miles round trip, no pastry.

Attempt 4: I looked up the closing hours (noon!), and got there at about 11:30. I walked up to the door! Victorious! Croissants would be mine! No! Door does not open! Door has this sign! 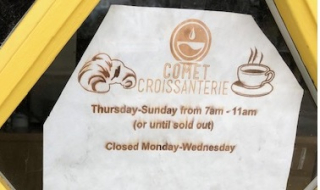 "Or until sold out." I suppose they've been selling out often enough they officially close an hour earlier and then sometimes even earlier than that. Another 48 miles wasted.

Attempt 5: The next day, Sunday, I was up at 6:45, dressed, ready to go, and Gary wheedled, "I can go with you if you wait." I gave him half an hour, and he was up and moving in time. So, 96 miles into this endeavor, I decided to given it another 48 and drive there one more time.

And they were there! And open! And we got one of everything: 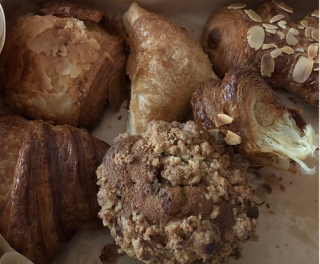 (Not pictured: a breakfast sandwich and half of the work pastry, which ended up being an Almond Bear Claw, only served on weekends, which was a "croissant wrapped around homemade sweet almond paste." And deep fried or something, I don't know, it was heavenly. Also shown: some kind of off-the menu muffin, a croissant, a pain au chocolate, and a strawberry-rhubarb turnover.)

Two things on the web menu were not there: the cinnamon rolls and the biscuits and gravy, which astonishingly did not sell well. I would think if one were decadent enough to frequent a pastry shop, one would not draw the line at biscuits and gravy.

Perhaps because it was lamb gravy? Now I really want biscuits and lamb gravy.

Posted at 08:31 AM in In Which We Mock Ourselves | Permalink

Yes, when pastries are that good day-old, they are worth quite a hike. I do think that the part of my brain that goes "oooh, croissants and sweet pastries!" is different from the part of my brain that goes "ooh, biscuits and gravy!" and it would be hard to want both at the same time? So if the main draw is the pastry, then biscuits and gravy would be dropped, I expect, because people are not in that frame of mind.

(are these low enough in sugar that your body doesn't get cranky about them? I know some croissants and related items really don't have much sugar in them, but many "breakfast pastries" are then also drenched in syrup or smothered in frosting and that would not work so well with a body that does not properly appreciate sugar...)

My god, the dedication! So glad the reward was proportional. Looks/sounds delicious. Mouth duly watering.

I think that's a reasonable way of categorizing them - just not my brain's way. :-) (plain biscuits, yes, are in the same general area as croissants in my head; biscuits and gravy somehow land in an entirely different region)

Auugh. I was hoping that maybe flour+fat+a little bit of sugar (in my recipe for croissants, I think there's two tablespoons of sugar in a ~60-croissant recipe? not a specifically low-sugar recipe) would let you off the hook, but no. So maybe it's a good-ish thing that the bakery is, uh, somewhat inconvenient to access... sulk.