Yet Another Ill-Advised Amazon Purchase

First I bought the German book. This time it was Gary's turn. 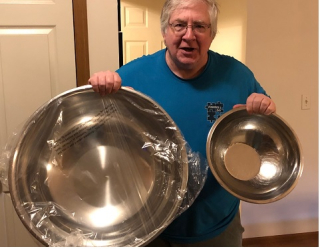 He was trying to buy a big salad bowl, because if he makes salad then I can't use the metal bowl to make pie crust (it's the smaller one).

He claims he measured. He claims it didn't cost that much. It cost FIFTY FIVE DOLLARS.

To be fair, he has no idea what a metal bowl costs, and there was nothing in the photo on Amazon to use for scale.

He tried to justify keeping it. I suggested we make an in-ground pool for the raccoons. Or, if we had a baby, we could use it to bathe the baby. Or chop it up in a salad.

I've read plenty of reviews where people complained that the item was way too small (read: they looked at the measurements in centimeters and thought they were inches), but how would you size up from Bowl A to Bowl B there? Would circumference instead of diameter be right? Or lip-of-bowl measurements being checked against base-of-bowl?

Well, rushing through purchases *does* have some advantages over protracted vacations in the Swamp of Endless Dithering, so there is that. But I hate returning things enough that I read as much of the fine print as I can reasonably get through, even though it does result in some back and forth changing-of-mind (okay, part of the fine-print-reading is also to catch things like "microfiber that feels just like 500 THREAD COUNT EGYPTIAN COTTON but technically isn't if you read the fine print" because I also hate getting taken advantage of).

But the big question: keep the bowl as a raccoon bath (that is actually a perhaps-brilliant idea) or return?