We saw Steven Page at Delmar Hall last week. Remember when I went to see Steven Page in 2010, right after he left BNL, and I complained his new group didn't seem to like him very much? Happily, he and his new trio appear to get along famously.

Famously, or infamously, or former famously: it's a topic on his new album, mainly on this new song, Shooting Star. (Skip the ad and listen to the link. It's so well crafted. Every time I listen to it I notice some new turn of phrase or pun or rhyme, and the music cascades into an eddy in my brain. Plus, and most important, I can't find a single error in the liner notes.)

He played old songs along with the new songs. Some old accompaniments have been completely revised. I think Jane is the one that was most changed.

The crowd was peculiar. Everyone seemed ... polite? Even I sat there with my hands folded in my lap. I saw more than a few people conducting an imaginary background symphony. Eventually, of course, everyone was standing at the end.

I don't know who books the acts at Delmar Hall, but they share my tastes. Squirrel Nut Zippers, Steven Page, and next month: Guster.

Fun in the Future

Wednesday the 17th - Steven Page concert. My right hand is twitching just typing that. So excited.

December 1 - Patton Oswalt at Ground Zero of Conservative America: the Saint Charles Family Arena.   Santorum gave a victory speech there. Country music concerts play there, because rock music is of the devil and is best played next to the riverboat casino tha is also of the devil. I honest to god don’t know how he’s going to cuss his way through his show, but then the Squirrell Nut Zippers show was labeled all ages and ... wasn’t.

I am not going to the latest venture by Sixthman, the company that brought us the BNL cruises and the Rock Boat cruise. That venture is Blues Alive At Sea. If you were planning a Mediterranean cruise and you love Peter Frampton, consider it.

i am going to the opera next season, to every show, and sitting in the best seats in the house. Season tickets to the opera! La LA.

I lived in a pop music desert in the 70s and 80s, because I grew up with all KMOX all the time until I rebelled by listening to NPR. Somehow, nothing improved after I married,so I missed most of the 90s bands until after they broke up, and that includes Squirrel Nut Zippers.

Evidently, the founder and the drummer kept the faith for a few decades and assembled an entirely new band touring under the old name. We saw them at Delmar Hall, a wee little venue built right on top of the parking lot where thieves broke into our car.

It was riotous. The founder, Jimbo, shamelessly old, stands center stage while this theatrical vortex of music whirls around him. The banjo player / violinist hops on one foot and kicks the air with the other while fiddling. The bass player flips her double bass over her head and plays it upside down. The horn section doesn’t pause for breath.

I was particularly impressed by the kicking fiddler, who goes by Dr. Sick, so impressed that I started to worry Jimbo might feel threatened by his raw talent and then Dr Sick would try to wrest control and there’d be a Squirrel Nut Zippers palace coup.

It all ended when someone got a tuba and they wound through the audience like a second line. Loads of fun.

Posted at 06:14 AM in Miscellaneous Mockery | Permalink | Comments (0)

Everything Old Is New Again, Again: Part the First - Landscaping

When we bought the house thirty plus years ago, Gary and I toiled to make a zig-zaggy retaining wall to “retain” about eight inches of dirt. It was made of arsenic-treated pressurized lumber and we had been ASSURED it would last through the ages. Lies! The insects snarfed up that arsenic, the roots splayed it apart, and the sprinkler system eroded it like the Grand Canyon.

Since this year’s vacation fund is being plowed back into the house, refreshing the landscape was at the top of the list.

Those bushes were so tiny years ago, but they have grown. And now they are gone and I remember them just as the hateful spiky plant and the barren azalea. 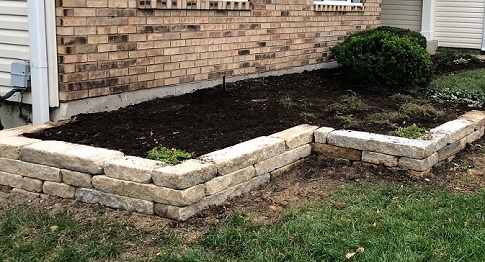 Now we have a stone wall. (We are debating which lasts longer: a stone wall or a vacation.) I think a dwarf mugo pine would fit there and thirty years from now those stones will still be in place. I hope so, because that wall isn’t going anywhere. It is dug in and epoxied and that’s two tons you’re looking at there.

I have great faith in the wall because it was built by a contractor, José, who works for the local school district, and I know school kids could tear down a wall like that in seconds were it not well made. Gary was appalled to find that José is a Republican, Mexican or not, since he’s a small business owner. Happily, José was good natured enough to let us chant “build the wall” at him.

Even though I had faith in the contractor, and I’ve wanted the wall for years, and I fantasize how it will look when the creeping Jenny and flowering thyme grows in, the process was still remarkably stressful. I understand now why people let their houses fall into disrepair: having someone else do things to your house will keep you up at night. Each night I stayed awake and mentally dug the trench, lay the gravel, arranged the stones, tested the sprinklers, matured the bushes... it was exhausting.

Still, as soon as I get a bush in there and get the lawn re-seeded, I will be back to planning vacations, which are much less worrisome and last a lot longer.

Posted at 09:54 AM in Miscellaneous Mockery | Permalink | Comments (0)