Various friends and I returned to the TeddyJ United Way trivia match this year. This is the match where we placed third last year. It’s the biggest in Saint Louis. It was a bit smaller this year: only 72 tables of ten.

There’s always a theme. This year it was “Seasons." Initially we were going with Allergy Season (though I pushed hard to make The Verb "Seasons" our theme, mainly so I could be a Spice Girl and Hot Mom’s husband could be, as he requested, Herb Tarlik from WKRP). Then at the last minute we veered instead into Hurricane Season. This required a special tablecloth I made in my basement: 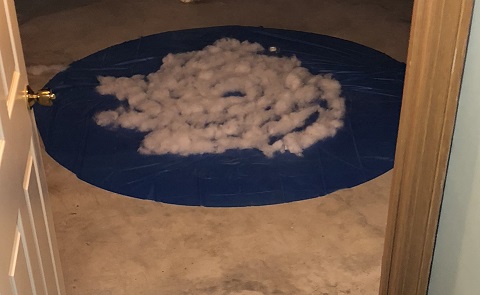 This was augmented by flashlights and distress flags. Mr. Friend #4 wore his Weather Channel shirt and went as Jim Cantore, while the rest of us were Hurricane Kris, Hurricane Anne, and so on.

There was also a special hurricane hairstyle that only I was able to pull off (though Friend #4 tried hard and was partially successful).

I bet we would have won the Theme award, but another table interpreted 'Seasons' as TV seasons and each person came as the standout SNL character from a season of that show. You just can't compete with a person wearing a full-on Mr. Bill head.

We moved from 14th place to 9th place (top ten!) after the seventh round. That was the round in which we had cropped movie posters and had to identify the movie. Mr. Friend #2 rattled off "Amadeus. Swingers. The Graduate." followed by seven more in rapid fire. Before that, Anne had done the same thing with pasta shapes. My only chance to contribute was blown in the Cliffhangers round when I said the show with the cliffhanger "Jesse shoots Gale" was, "Oh! I know this! Full House." I was so busy going for the joke that I forgot all about (spoilers) the two times I watched Breaking Bad.

So we felt pretty good about being in the top ten. Five of us stayed on for the official tally. There was a three way tie for first - and we were tied for first. We were gobsmacked. "Wait. He just said Table 36. We're Table 36. I am confused." And then the realization, and the screaming. The rules dictated that the judges break the tie by comparing scores of the final, hardest round, and we got a perfect score on that one. See? See where this is going? How cool am I, so blase about officially winning first place at the largest trivia match in Saint Louis. I didn't even put that in all caps.

I did that when I texted the three tablemates who left early and missed the priceless "first runner up" moment when you realize first runner up is Not You and you won first place at something.

Posted at 10:50 AM in Miscellaneous Mockery | Permalink | Comments (0)

I went to two concerts in the last two weeks, both with Friend #2, because she rocks. 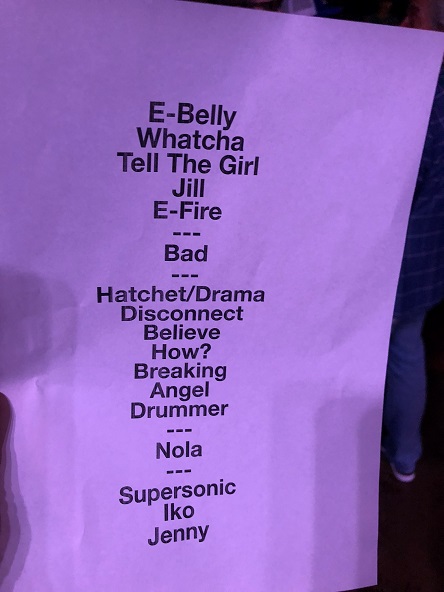 Friend #2, aka Hot Mom, is a big Cowboy Mouth fan from way back. When her intended date bailed on her at the last minute I was glad to step in.

We stood right against the stage, close enough she could tuck her drink in between two amps. I found myself nose to knee with Matt, the guitarist who was on the bus during our ill-fated trip to Chicken Itza. Of course, I had to avoid eye contact somehow, so I focused on his fretwork. He must have been playing the guitar since he was born. So impressive when you can see it close up.

A week later my friend found herself with two extra free tickets to the VIP box at the Lyle Lovett concert. I said, "You had me at VIP." I've never had the VIP experience at the Peabody Opera House.  (I know they changed the name to Stifel Theatre. I'm going to go back to calling it the Kiel Opera House until it gets a name it can stick with for more than ten years. I had just changed to Peabody, you bastards.)

The VIP experience involved valet parking, loge seats, and tasty wee foodlets in the lounge. There was also a musician playing. Evidently if you are playing inches in front of me I can't make eye contact, but if you are all the way across a sparsely populated lounge I have to come over and wave. The musician was nice enough to smile at me whenever he saw me after that. It seems if you're playing music for me it seems wrong to nibble on asparagus and treat you like Muzak.

We downed our drinks, got to our seats and ten minutes later Lyle was singing to us about Choking His Chicken All Night Long. I had done some research on Lyle before the concert, since all I know about his music is that he was married to Julia Roberts. I found a song about how he was going to take a pony out on a boat and I did not do any further lyric research after that. Of course, after the concert I tried to find the lyrics for the chicken choking song, but it seems that is a set piece he has not put on an album as of yet.

Both very lovely evenings. I'm looking forward to the rest of the year, when we have Steven Page and Squirrel Nut zippers concerts at a new venue in town, and then we see Kathy Griffin in October and Patton Oswalt in December (at, of all places, the Saint Charles Family Arena, home to every red state political event of the last four years).

How Would You Even Do That

I sat in a group of four people. One was twisting and writhing and complaining he couldn't "crack" his back.

I was expecting - I don't know. Acclaim? Envy? What I got was a horrified pause, and then "What ... what did you say?"

"I've never cracked my back or my knuckles."

"OH! I thought you said NIPPLES."

Now, this guy is in his 20s, and I could have just written it off as juvenile behavior, especially when his equally young friend agreed, "Yeah, that's what I heard too."

Then a woman my age said, "Oh. I did think that was unusual."

And then Friend #3 piled on and said, "I definitely heard you say you'd never cracked your nipples. Four of us heard it."

Then I spent the rest of the day eNUNciating and Ar-TIC-u-lating.