See? Nothing is happening of any significance. Things are fallow and aging and decaying, except for toilets and mailboxes, which keep me young.

PGA Tournament by the Numbers

Number of people I asked if they wanted to go to the first practice day of the PGA Tournament, before I asked Gary: 2.

Number of times I asked Gary, “Are you SURE you want to go? Because I have lots of other people I can ask”: at least ten.

Number of people I should have asked instead of Gary: infinity.

Number of fights we had before we even left for the tournament: 1.

Number of degrees Fahrenheit at the start of the tournament: 80.

Number of people wearing “business casual” pants, as per the PGA: 0

Number of times Gary complained about wearing pants and not shorts: 1,000,000.

Number of times Gary expressed dissatisfaction about something other than the heat and the shorts: 5,000,000.

Number of times Gary said something positive: 1.  (It wasn’t to me, but to some random woman who was worried about something.)

Number of hours we were there before we had to leave because of the heat and the shorts (and, I suspect, the country club environment): 4.

Number of words we said to each other the rest of the day: 0.

Number of recognizable golf figures: 2. No Tiger, he was taking an ice bath that day, but Rory McIlroy was there (with his signature golf clubs dressed up as dogs), and also a famous guy known as “Fluff” (Tiger’s former caddy).

Number of Clydesdales I saw: 12. First, three Clydesdales were hanging out by the merchandise tent on our way out. I was on the forced death march to the car so I wasn’t allowed to stop. Karma was watching, though, and we were nose to nose with a full-on Clydesdale Budweiser firewagon parade a few minutes later.

Number of times I got on the golf green: 1. There’s an odd spot where the walking path intersects with the green. It looks for a bit like you’re on a miniature golf course. I made a point of walking on the green. I felt there were people there dreaming of being on the green at a tournament, and now I can tick that off my bucket list.

Number of people stranded on the parking lot the next day: 1,000. Really. There was a rain delay so everyone on the south lot had to cool their heels until the rain stopped up north. So, dodged that bullet.

And finally, number of sex dreams I had that night: 1. In a rather pointed narrative my subconscious whipped up, I was a teenage girl on a date with a teenage boy. He held my hand for the first time and I was very excited. Then he put his arm around me and it was ... well it was thrilling. You remember how it was. When you were first dating. When everything was fresh, and new, and YES I GET IT SUBCONSCIOUS. Starting over again instead of being married 33 years. Sigh. I woke up before I did anything untoward, but I still felt like I’d cheated on Gary.

Perhaps After This I Will Find I Like Golf

i am feeling a bit of guilt. My job allows us to win tickets, and as you know I’ve been pretty lucky. I’ve won tickets to several concerts, a magic act, a musical, some baseball games, and so on.

Honestly, I only signed up for the drawing for the PGA Tournament because it would afford me access again to the Bellerive Country Club. I’ve only been there once and, even though I remember being a little put off  (there were five foot chandeliers every six feet, excessive), I do like rubbing shoulders with wealthy people and seeing how long before they find me out.

That’s why the day I found out I had won tickets to Monday’s practice round, I began shopping. Well, I began researching, then I began shopping. I am sure if I had ever seen a golf tournament even on television I would be better prepared for what is expected of my attire.

Thursday, while I was shopping for a coordinating top (I was wearing the pants I’d found the night before), I encountered a older lady who had been to a golf tournament, back in the day, and she said the pants I was wearing would pass, but my shoes would probably not be acceptable. I went home and polished my filthy shoes.

This is what I plan to wear. (Because that’s what it is all about for me. I only know two golfer’s names, Rory and Tiger, and I am afraid Tiger is the only one I could identify by sight.) 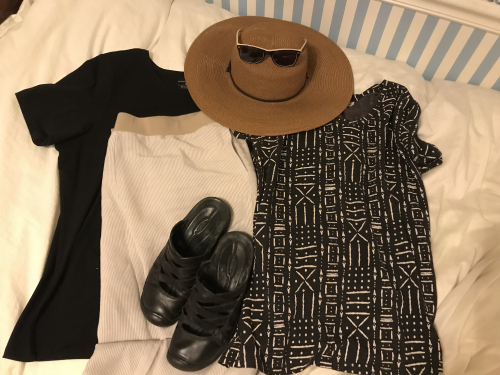 I can’t decide between the black tee and the patterned blouse. I feel the tee looks more sophisticated, but there have been conflicting messages about what is business casual from the country club and the company. I do have a tiny black bag and I could pack one as a backup.

It is all pointless, of course, because it will be 97 degrees and I will be a sweaty pig parading in rumpled J. Jill linen pants. I doubt I will get past the door.