Last Saturday I was full of the morning energy you get when you've been laid up all week and then you put on a bra and leave the house and go shopping. Then you trip over your feet at the grocery and land on your knees and then your chin and then your nose. Then when you recover you think, I'm going to go buy palmiers at La Bonne Bouchée and also an extra treat for me, la LAH, because I am a survivor.

The lovely counter person served up my palmier, and listened as I mourned that they have no canelé.

Ah canelé. I fell in love with them in Paris, then had a bad one in Quebec City. (So bad I left it on a railing for the local birds.) It's essentially a caramel-coated condensed popover, but better.

The counter person said,"Oh, I go to Nathaniel Reid Bakery for canelé. And they have them at Sucrose, and La Patisserie Chouquette might have them. I like the ones at Nathaniel Reid best. I go there a lot." Three places with canelé driving distance from my house! One not five miles away!

Sucrose though, the one by me, has the best canelé. I was just a touch sweeter than Nathaniel Reid. When I had Anne join me in a canelé taste test that evening, Nathaniel Reid looked more imposing and professional, but had developed a gummy interior, whereas Sucrose stayed tender. 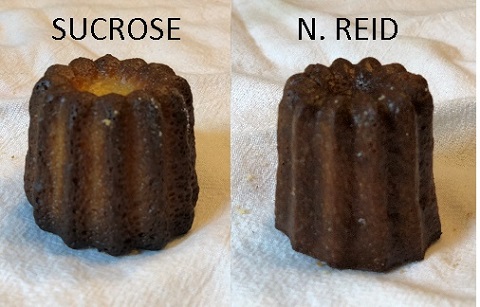 It was so good I might not even visit La Patisserie Chouquette this weekend to see if they also have canelé.

Posted at 10:00 PM in In Which We Mock Ourselves, Miscellaneous Mockery | Permalink | Comments (0)

Deep throat and now this.

Posted at 10:52 AM in Miscellaneous Mockery | Permalink | Comments (0)

Good God, I have had such a head cold. It lay me low all this week. Every time I tried to work I did something so stupid I had to take yet another sick day. And it all began last Thursday, my thirty-third wedding anniversary, when I foolishly shook hands with two strangers.

I knew there was a FLW-designed house in Kirkwood, because I looked into it years ago when it was a private home. SInce then, the owners have sold the house to Saint Louis County, who fixed up some rough spots and have opened it for tours. Every weekend it fills up, but since was a Thursday, and I'd taken off work for the anniversary, we went.

The first thing I did upon getting out of the car was to use the port-a-potty, and Gary believed me when I came out and told him it was designed with all right angles and strong horizontal lines.

That was inadvertently ironic, since this house is known for having exactly two right angles in the whole house. It's a parallelogram on top of another parallelogram, all wood, and delightfully wee.

There are many cunning things, like the bed, and the drawer, but I won't spoil those things for you if you intend to go. It is floor-to-ceiling red cedar, plus the ceiling is red cedar too, which means that it has a little claustrophobic effect. (Or, as Gary put it,  "COFFIN I FEEL LIKE I'M IN A COFFIN AND I'M DEAD IN A COFFIN.") I found it lovely. Plus, the owner made his own stained glass and got permission from Frank Lloyd himself to add his glasswork to FLW's design. Can you imagine? What a thrill!

The guide really made the owners come alive, plus their cat, who left non-parrallel scratch marks on their desk. I personally would considered evicting the cat.

After a run of particularly bad eating (Shake Shake, frozen custard, ice cream, barbeque) we went to relieve Gary's iPhone guilt. Every since I indulged Gary with his iPhone X at Christmas, it seems he has felt crippling guilt every time he sees me, the breadwinner, with my little iPhone 4. So, as a favor to Gary, so he wouldn't feel bad, I agreed to an iPhone upgrade. It was a sacrifice. If anyone asks me what Gary got me for my anniversary, I can say that he got me a cessation from constant iPhone nagging.

I actually lost something on the deal, because the iPhone X (I know, I know, talk to Gary about it) will not sync up with my work email, so no more late night work emails. Actually, I don't know if I can count that as a loss.

Love Is In the Air

First, we were on the parking lot at the Home Deport hardware store and suddenly romantic music swelled in the distance. I thought the Chick-Fil-A might have to decided to start piping secular music outside its store, but then Gary pointed out the accordian busker in the middle of the parking lot.

The middle of the lot. A parking lot. We had to make a special trip to tip him. It was a nice surprise.

Second, Gary found this on the raccoon videos. These raccoons have been watching us. The one on the left is Gary in his recliner, and I'm the one on the right.

(Click back in time to How to Oil Paint in 7 Steps.)

Today, Gary paid me a compliment on my current oil paintings and I immediately went out and bought some professional equipment. I am happy that expensive brushes do not lose their bristles as fast as cheap, but given that they were ten times the price I expect perfection. I also splurged on Grumbacher white paint, after reading an alarming article on how yellow your white paint will turn in five years.

Just imagine if I were a knitter and Gary complimented me. I would be buying my own sheep and a loom at this moment.

(Click back in time to The High Price of Drugs.)

I've refilled my expensive MS prescription twice so far this year, and I keep waiting for the big hit to my health savings account. I didn't realize it, but the the co-pay assistance company was cheerfully paying for it each time. After the last time, they called me and we worked out a plan that will suit all parties (the insurance will be satisfied that I paid the deductible, not someone else) and I won't be out any money except the shipping costs.

It's a scary plan, in that I 1) ignore that I have a Health Savings Account and 2) put my share of the drug cost on my credit card (more airline miles for me). Surprisingly, my share is only a thousand dollars a month, and it's a testament to our screwed-up healthcare that I just typed that "only" with all sincerity.

Then, a few weeks after I pay, the co-pay company reimburses me. Since, technically, I paid for it, the first three months takes care of my deductible, and the insurance company is content that I've weighed the benefit of the drug against the cost to me.

I am absolutely the most fortunate of MS sufferers, seriously. A stay for another year!

I was listening to Lookin' Up on the latest BNL CD, the delightfully-named Fake Nudes, when I heard the lyric: "I feel like a lightning strike / Every time I rock the mic."

This was about the hundredth time I'd heard that line, since I'm back to listening to only one song per CD on repeat, but it made me remember that I had been slacking off on my job of Unsolicited CD Proofreader. (See: BNL, Barenaked Ladies Are Men and Nellie McKay, Pretty Little Head.)

So, I had to check the liner notes to see if BNL spelled "lightning" correctly, or if it's spelled as "lightening" again.

I am glad to report they spelled it correctly this time.

Sadly, a few lines earlier they had "one foot on the peddle / One hand on the wheel."

I mean, I could try to tell myself that it's a pun, they're driving off to peddle their music, but there's also a "you" in place of a "your" -- well, it doesn't speak well for any proofreaders at Vanguard Records.