As you know, my usual hobby cycle is:

The oil painting hobby seems to be a little different. I won the oil painting starter kit at trivia, so I skipped a good part of step 1 (though I did buy a lot of cheap brushes).

Perhaps that's why the encouraging small success surprised me by arriving early, on my second attempt instead of my third. 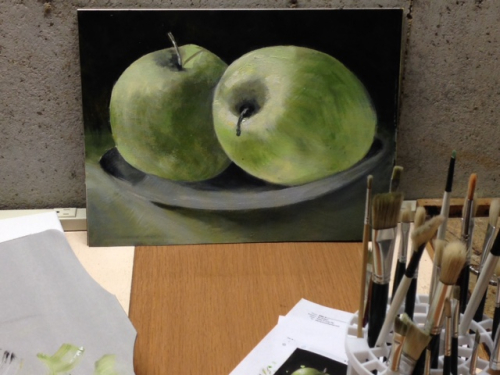 That's my second attempt propped up against the basement wall. It's not on a full canvas, because as I say I was not expecting anything, so I just painted it on a canvas pad. And while there are many things I don't like: the plate got a little too distorted, and I painted highlights over the stem's shadow on the right apple, and there are two spots that are clearly overworked... and I could go on, but I was pleasantly surprised. It looks like a pair of green apples on a plate, and the dark background really makes it pop. That must be why so many still lifes have a black background.

I don't quite know what to do. I truly want to either a) quit right now or b) paint a portrait of Gary as Madame X next.

I was so pleased with myself that I butchered Danny Boy on my guitar to knock me back down, so I wouldn't get a big head.

(Half an hour later) I just looked at a lot of John Singer Sargent portraits and now I am fully humbled.

Posted at 08:20 PM in In Which We Mock Ourselves | Permalink

You should be pleased with yourself. Painting is HARD (I tried it myself a while ago) and that is a very good result. Well done. Keep going.

Big Dot - I need to add a new step, Trolling For Encouragement. Thank you for the encouraging words.