« Big Vacation: Mardi Gras Really Gets Going | Main | And So It Begins »

For both of us, the big Rock Boat/New Orleans vacation awakened the part of our brain that says, "I could do that at home."

For example, Gary ate some cruise ship Indian food that wasn't unpleasantly spicy. He thought he might try his hand at making Indian food at home. We bought the spices and we discovered that Tandoori is pleasant and Garam Masala is of the devil and is to be shunned. And just yesterday I made some Butter Chicken that had 1/4th the prescribed garam masala and it is excellent. I'm looking for more Indian dishes I can weaken and undermine.

In New Orleans, after hearing some classical guitar at Cafe Beignet, I decided I could do that too. The guitar player was simultaneously playing the solo and the accompaniment. He was kind enough to talk to me and he recommended some on-line resources where I could learn the classical guitar techniques he was using. I've practiced every day. It's been easy so far, since I've already fumbled my way into all the individual skills, I just need to put them together.

We passed a furniture gallery that had absurdly ABSURDLY priced home decor. I was particularly taken with a brass paper towel holder that was heavily discounted. 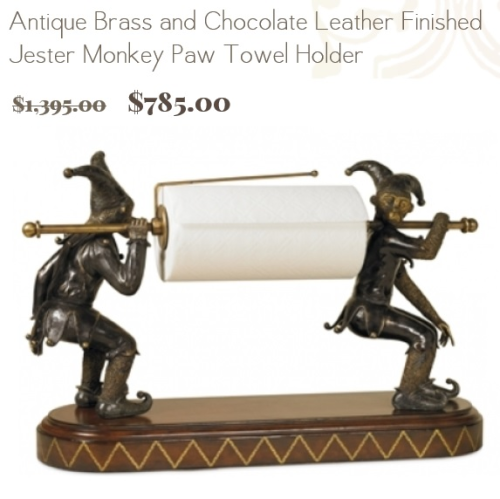 I stared at it so long Gary became concerned that I might think SEVEN HUNDRED AND EIGHTY FIVE DOLLARS was a reasonable price for a PAPER TOWEL HOLDER and, in a panicked voice, said, "I really like the paper towel holder we have now."

Lost in my thoughts, I murmured, "I'm trying to see how I can make that at home ..."

Seriously, look at that. A spring, a drill, some resin figures, a rod, there you are.

But to be honest, forget resin, I was thinking I could make my own out of brass, because I had visited the Rodrigue "Blue Dog" Studio and there was an explanation right there on the wall about how you cast things in brass. Plus, there's a WikiHow page.

(The people who run the art galleries in New Orleans are very very open about the techniques every artist uses. By the time I left for home I knew 1) how to use red paint, newspaper, and asphalt to create an open water effect, 2) how to make a faded effect using acrylic paint, and 3) how to use alternating layers of resin and paint to make a very effective trompe-l'oeil goldfish pond sculpture.)

Speaking of the Rodrigue Studio, if you went to the link above you know this is what the studio looks like (minus the piano, that was gone):

We were in the studio with a toddler who had learned the word "pup" that very day. That little girl was bouncing between works of art like a Roomba, and when she'd land on one she'd point and say "pup!" in complete amazement. Like, "My God, there's another one. I just saw a painting of a pup over there, and here's another right across the room. WHAT ARE THE ODDS?" Then she'd go off in a random direction and find that she was just toddling around and MY GOD THERE'S ANOTHER PUP. ("Pup!")

It was my favorite part of the entire trip.

I went to the Blue Dog Cafe in Lafayette, so that bit was super-familiar - plus, in New Orleans, I won a guitar in a lucky draw and had to haul it all the way home. I tried to play a chord but my fingers wouldn't stretch so I decided to sell it. It's still in the cupboard though. I saw someone playing one on their knees and that looked easier. What do you reckon?
I ate at the Cafe Beignet too...

Big Dot - So, do you mean the person knelt and put the guitar on the floor and played it like a dulcimer? That would be easier. Most people complain that their fingers get sore until you grow calluses. My hands don't stretch enough either, but there are ten different ways to play every chord, and some are easier than others. I can't play any "barre" chords.

I love that Gary thought you wanted to buy that ugly paper towel holder!

Erin Savage - He lives in his own reality.