Big Vacation: The Parades in NOLA

1) A Mardi Gras parade is sponsored by a social club called a Krewe. We don't have Krewes in St. Louis, but we have social clubs like the Elks and the Shriners. The only parallel I could draw was if the St. Louis Shriners parade became so popular that people traveled from Europe to participate in it.
2) There are two types of krewes: walking krewes, and larger krewes that hold motorized parades. A walking krewe might parade through the French Quarter, or a subset of a larger Krewe might have a walking parade before their motorized parade with giant double-decker floats.
3) At all parades, the paraders hurl beads at the outstretched hands in the crowd.  In addition, people on balconies throw beads to any crowds below. We had to sign an agreement with the hotel that we wouldn't fling anything off our balcony.
4) Paraders also throw special things called 'throws' that have some significance to the group sponsoring the parade. They are much valued. The all-female Krewe of Nyx threw decorative shoes and handbags. The breast cancer group threw bras and soft squeeze balls that looked like breasts (NSFW).

Right before we arrived, there was not a parade but a stripper protest march. The government shut down some of the stripper bars on Bourbon. Strippers took to the streets - specifically Bourbon street -  to express their displeasure at having their livelihood taken away right before tourist season. Everyone had an opinion about it.

We saw these parades:

Parade 1 happened when we were in the taxi driving from the port to the hotel. The taxi stopped at a light while a walking Krewe parade marched in the opposing lane.

"Do you want beads?" the driver asked.

Yes please, we said, and he rolled down the windows on the parade side. He made a subtle little gesture at the paraders and a TSUNAMI OF BEADS hit the side of the taxi and poured into the back seat.

Parade 3 was our first big motorized Krewe parade on Canal street: the Krewe of Ancient Druids. We got there insanely early, and it was pouring cold rain, and we got right up on the barrier. Great for photos, right? Nope, Gary spent so much time giving the crowd updates from the Parade Tracker iPhone app that the battery died after the first blurry, rainy shot. 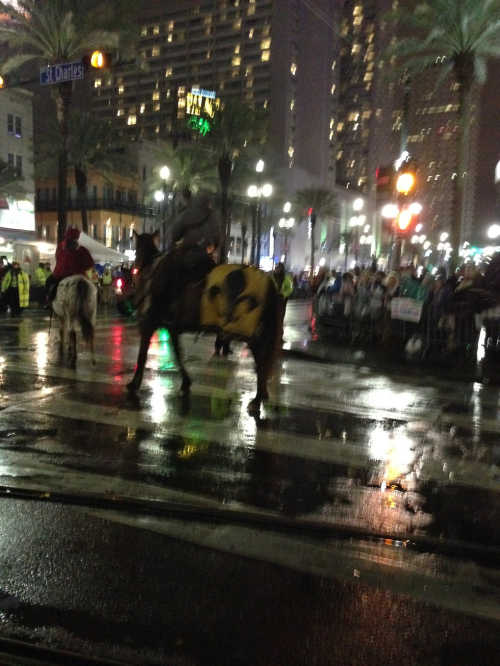 Still, everyone appreciated Gary announcing "The parade has moved one block closer!" every five minutes.

Parade 4 was our second big Krewe parade, the Krewe of Babylon. We were well back in the crowd this time, next to drunk boys yelling, "WHERE ARE THE TITTIES." There was also a beer vendor who was an expert at giving counting out inaccurate change. At one point he pressured me into watching his cooler of beer while he took off. I protested but found myself doing it anyway. He came back and insisted I watch the parade from on top his beer cooler. I protested but found myself on top of the cooler. I got down as soon as possible. It's conceivable that this was when I lost my backup passport ID card.

Gary got some video of this one.

Parade 5 was the one I had planned for: it was a parade that was scheduled to go right under our hotel balcony, and the Krewe was the breast cancer awareness group The Krewe of Bosom Buddies.

That one was at 11:00 am on Friday. By 2:00 pm three other parades had gone below our balcony and I felt a little silly for thinking I'd worried we wouldn't see one. .

After 2:00 we went down to the front desk to get wrist bracelets that identified that we were guests of the hotel. I was surprised it would get so crazy outside that this would be needed. I'd seen three parades that day: how could things get crazier?

More on that later.

That looks like so much fun! The only thing is- was it hard to find bathrooms?

Dawn - our hotel was the Bourbon Orleans hotel, which is an easy walk from anywhere we were in the French quarter. When we saw the big parades, it wasn't an easy walk, but there were many port a potties.