Big Vacation: Music on the Boat

One appeal of the Rock Boat is the intimacy you feel with the artists. I had many chances to be a giggling fan-girl to the musicians, but at least once I chose to be a gracious fan-lady instead.

One evening I'd been watching a Cowboy Mouth concert on the pool deck, but Gary wanted to listen to a female group on the other side of the boat. To leave we had to walk toward -- and then past -- the stage, just as Fred, the lead drummer/singer (I know, it's unusual) was demanding the crowd "come a little closer, now." Since everyone was scooting closer to the stage anyway, I thought I'd blend right in, but I made the mistake of making eye contact with Fred and not letting go.

I just laughed and didn't break stride. Please. Fred's stage persona isn't as loud and bossy as Gary is in real life.

When I was having my ten-prune breakfast at seven the next morning, I walked right past Fred in the near-empty dining hall. I gave him a gracious fan-lady nod, and he gave me a big smile.

Gary had his own chance to be called out from the stage when we were at the Choir! Choir! Choir! show. Let me recommend Choir! Choir! Choir! to anyone in Chicago or the Northern U.S/Southern Canada., where they are appearing soon. Prepare to laugh, prepare to sing, because that's their deal - the two guys coach the audience through a group harmony sing-along by using comedy and crowd-shaming.

The singers spotted Gary five rows back, scowling, his jacket draped over his crossed arms, having none of this group singing thing I'd insisted we see.

Gary handed over his jacket to the people in front, who put it on stage.

"Thanks!" the singer said. "That's to make sure you don't leave."

You can always spot Talent on the Rock Boat, because:

This is not the criterion Gary uses to identify talent. We were on the bus for our shore excursion to Chichen Itza, and Gary remarked, "There are EIGHT musicians with us on this bus." I quizzed him and it became clear he thinks any man with high-quality, ornate tattoo work is a musician.

However, there WAS one actual artist on our bus: Matt, the guitarist from Cowboy Mouth. (If you look at the photos on the Cowboy Mouth photo site, Matt's the one with the high-quality, ornate tattoo work.)

Matt came in very handy when this happened: 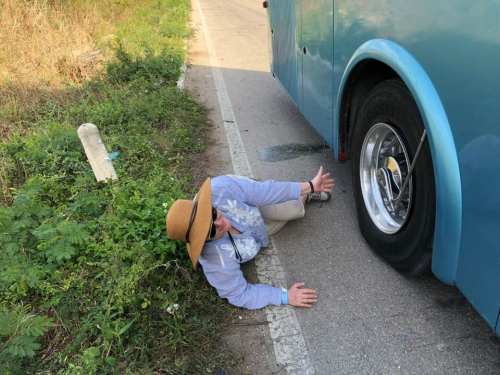 When we heard the unmistakable sound of the bus tire going flat on the way back to port, Gary promptly said, "We're going to miss the boat. It took two and a half hours to get to Chichen Itza, and we've been driving back for - "

I said confidently, "They'll hold the boat. The Cowboy Mouth guitarist's on our bus, and the boat's not leaving without him."

A new "rescue" bus arrived sooner than expected and we made it back with five minutes to spare --  I imagine Matt the Ornately Tattooed Guitarist gets the credit for that.

I love the description of the group that asked for Gary's jacket. I'm in Chicago AND I could use a night out with a laugh included! Looking them up.

Erin - they're there tonight. Better get on it!