Everything we ate in New Orleans was the best, each in its own way. (And was appropriately ... mobile, in case you were wondering.)

The Most Color Coordinated: When we ate at the hotel buffet, I noticed my root vegetables were Yukon Gold potatoes, trendy purple potatoes, and green peppers - or purple, green and gold, the Mardi Gras colors. 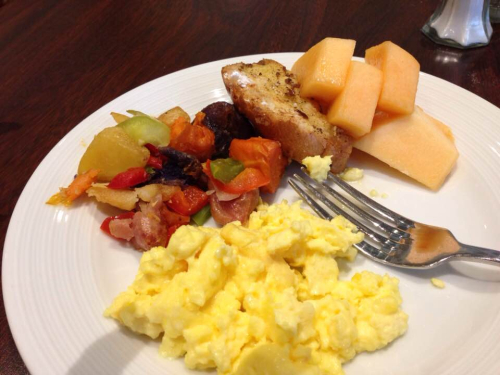 The Most Versatile: Grits. Most of my meals were grit-based. The best of all was the Barbecued Shrimp and Grits at Tujague's Restaurant. The "Barbecue" sauce was delicious - not a BBQ at all, but a very complex brown gravy. The grits were of the same durable consistency as the cheese and bacon grits at Stanley, not creamy like the grits at the Old Coffee Pot.

The Most Decadent: Monty's is across the street from the Cafe Du Monde, where they serve the most well-known beignets - a pastry that is too sweet even for my palate. Evidently Monty's looked at Cafe Du Monde's deep-fried pastry dough covered in powdered sugar and said "Hold My Chicory Coffee."

They took the puffy square of raw pastry, sliced it into french-fry shapes, and then deep fried those. So, instead of a deep-fried puffy square, they multiplied the available surface area of crispy deep-fried goodness and then put powdered sugar over that. It knocked back the sweetness quite a bit since it bumped up the fried bread surface exponentially. I say that without shame.

I suppose in a few years a place will open next door and they'll take the beignet fries and enrobe them in dark chocolate or something even more decadent.

Best Restaurant Overall: Muriel's, where we had gumbo, and chowder, and feta and crawdad crepes, and crabcakes, and bread pudding, and King Cake with the obligatory baby - only the baby was just perched on the outside and it was painted gold. I pocketed it and dropped it into Gary's Baileys later that night. He claims the alcohol ate off some of the gold on the baby's scalp. 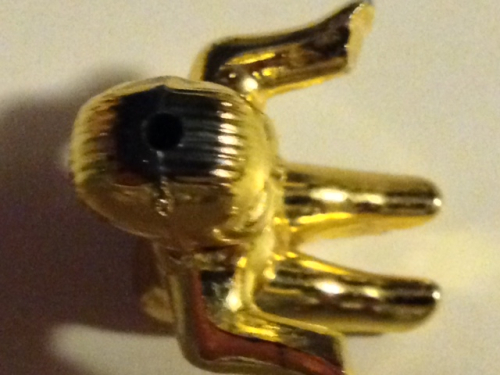 In the right light you can see that there's a deliberate hole. I say it's the hole you have to leave so you don't suffer "skin suffocation" like in Goldfinger. Or, since there's another hole he's sitting on, he might be a bead.

Anyway, Gold King Cake Baby came home with us and has been perched on every meal, including tonight's frozen pizza. 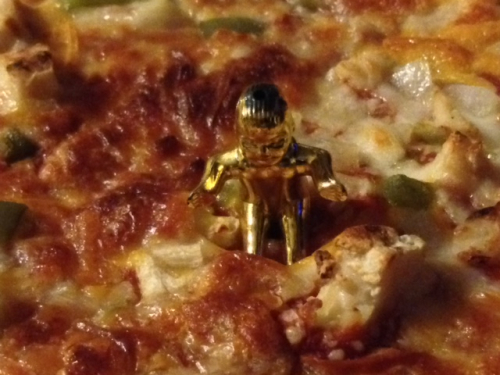 Posted at 07:22 AM in Miscellaneous Mockery | Permalink

I'm not up to speed on the gold baby thing. Is that part of the package in New Orleans? I was there last summer, but we only ate out once. No gold baby in sight.

Ernie - the baby (usually pink, this place was fancy) is part of the King Cake tradition. People eat a special cake before Lent, called a King cake, and the plastic baby is cooked in the cake and whoever gets the baby is special in some way.See https://en.wikipedia.org/wiki/King_cake#Trinket
There is a famous King Cake Baby on Facebook that takes photos facing various NOLA scenes. If the woman in this photo would have moved her arm you could have seen us standing on our balcony. https://www.facebook.com/kingcakebaby/photos/pcb.10155393076051342/10155393050596342/?type=3&theater