At work Friday, I was chatting with my co-worker, M___ .  M___ said she had gotten over whatever sickness she'd had on Wednesday, but that her husband was at home with the flu that very minute.

I stood up and walked away. Then I went and got some Lysol wipes, wiped my hands, lurked a few cubes over until Typhoid M___ moved on, and then wiped down everything she had touched, because I am getting on a plane and a boat and I will not be sick.

I have been washing my hands every other hour. If anyone in my department coughs or sneezes I give myself a pump of hand sanitizer, even if they're three rows away. And then this woman comes in directly from her husband's sickbed? No. No thank you. I make the sign of the cross at you, madam. Begone.

Later on I went to a reception in the building, and immediately scanned the crowd to see where M___ was. My friend D___ saw me looking and laughed, because she (D___) was one of the people who gave me refuge in her cube while M___ was blowing the flu about in her wake.

I gasped in horror.

Of course, D___ was riding me. Patient Zero M___ was not serving any cake. She was just cozied up next to the department head who will no doubt be shivering and aching by Monday.

Just typing about the experience made me get up and wash my hands.

Then the guy on the other side of me will say "It's probably okay, but I'm an expert in salmon, I live in Alaska. Hi, I'm Jim."

Then I have to shake both their hands.

I don't mind it. A few days ago I was pulled into a conversation about where to hike (I steered them away from Mark Twain Lake and toward Elephant Rocks), and then when I sat alone finishing my meal a man came up and asked if he could sit with me.

"Sure, but I'm leaving after this next bite."

I took my last bite, then took a chance and sighed, "It's like we never talk anymore."

Recently, one of these trainees was in the food line with me and asked how I was today. When I turned to answer he took a big step back, waved his hands about and cried out, "I know you! ! I know you!"

Turns out he was in the Intro class, and that class watches as homework the video I was in last March, the one with the bonus makeover. Given how I looked after the makeover compared to how I've looked recently, I'm amazed he recognized me. 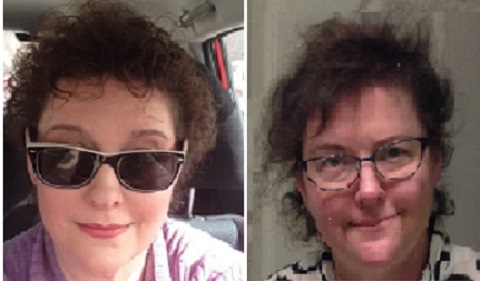 Gary had a colonoscopy scheduled for 11:30 today.

He had instructions on what to eat and when, and of course since he's all-or-nothing he decided to kick the doctor's orders up a notch. "Don't eat at all the day before" - well, how about don't eat TWO days before! That's how Gary rolls.

So of course, when he took the prep there was nothing in there but bile, because he has no gallbladder. Just a bilious slurry of broth, Propel, and clear energy drinks. I know he thought he would go clear and then at some point he would dry out, poor baby. Nope. He could not get out of the bathroom.

That's why we left for the colonoscopy an hour ahead of time: I figured we'd be stopping over and over. As it turned out, we only stopped the car twice - the last time at a grocery about half a mile away from our destination.

We stopped ... for good. Gary returned from the bathroom, reported success, I turned the key ...

Car: Click
Me: Noooo.
Gary: I am not drinking that stuff again. We are GOING to that COLONOSCOPY.

We just hoofed it and got to the colonoscopy appointment with one minute to spare. He was being pretty bossy, and he ordered me home to get the other car, though I'm sure my tow truck idea would have been more efficient.

While Gary got scoped, I took a $40 taxi back home to get the other car, since he would be too drugged to drive home. Of course, I was halfway there before I realized I had no way to get in. No garage door opener, and the key I haven't used in five years is no longer in my purse. "It's fine," I thought, "I'll just use the Special Secret Key that is hidden outside."

I got there. Special Secret Key is gone. Raccoons must have taken it. "Noooo" I said for the second time that day.

I scrabbled, I searched, I planned to break a window - then I remembered Gary shoved some stuff into my pockets as I was leaving. Happily, he'd unloaded his wallet, glasses, phone, and thankfully - keys.

So Gary came through it all minus three tiny polyps and is snoring away at this moment. The car is still at the grocery, and I don't care. I don't think I'll care until this weekend, even.

My hair is just a great big barometer. Any change in weather affects it.

It looks particularly hideous when it's hot and humid, like when I'm on a cruise.

It also looks awful when it's extremely cold and dry.

Today it was cold. 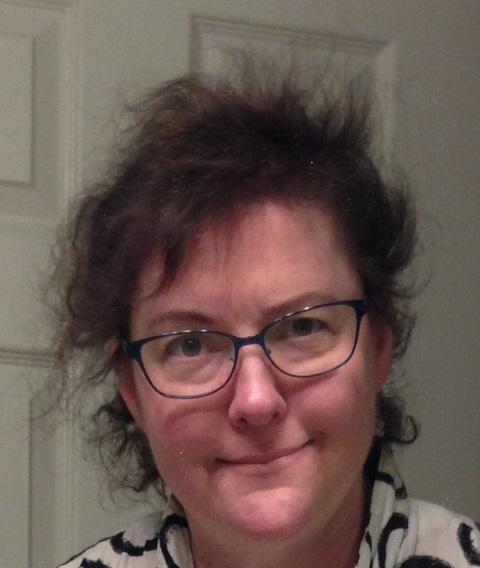 That's how it looked all day.

The Year in Resistance

"Good march. I wonder how long Trump will last." - Me, after the St. Louis Women's March in January

Even though we attended the Women's March, Immigration March, Planned Parenthood March, Tax March, Science March, Climate Change March, Healthcare Rally, Truth March, and Impeachment Rally, the Pence Regency / Trump Presidency persists. Gary protests virulently on Facebook every day, and we dressed as Russian trolls for Halloween, but other than that the Resistance seems to have gone dormant. I long for a march on the anniversary of the Women's March, preferably one with the brass Dixieland band.

The Year In Music

We went to see Cabaret, BNL, Doobie Brothers / Chicago, Foreigner, missed the Pixies because we are stupid, but saw Katy Perry. I stepped out of my pop music comfort zone to go to the opera with Anne.

The Year in Idle Pursuits

I don't know if Gary will want to revisit the NaughtiGras this year - it'll be on the tail of a pretty exhausting holiday. I know, I know, I just came off of an exhausting holiday at Universal Studios. Next year I'll be sure to space out my vacation time better. Thinking of that, seven years from now I need to be sure I don't visit an escape room and a cave the same week there's a total solar eclipse.

The Year in Personal Growth

Well, I don't know about personal growth, but I know marital growth has occurred. We've started identifying what makes us crazy. We still say "You ALWAYS do that when - " and then later we fill in the blanks. We always do seem to fight tenaciously over questions neither of us know the answer to. Where we are when we're lost, how to hang a ceiling fan, how to use Gary's new iPhone. If one takes an opinion the other (Gary, let's be real) takes the opposing opinion, and then the fight is on.

New Year's resolution: no more of that. More protests and concerts and idle pursuits.