Gary just called in from the other room.

"Ellen, what the name of this thing on the bed?"

"Thank you." I could hear him typing.

I kept quiet. I haven't slept in that room for years now. I suppose Gary saw me feathering my nest and felt an urge to decorate what we've taken to calling "his" room.

I immediately thought of all the garish coverlets he could be looking at, all of which would require repainting the walls and rehanging the collection of Mucha prints I've started in college. Still, I thought, I've lost control of the kitchen and it didn't kill me. He's a grown man. He can pick out his own coverlet. Long gone are the days I would tear a room apart if he overrode one of my decorating decisions.

He started to make noises. "What is this again? A duvet cover?"

Then a few minutes later, "You said it was a featherbed?"

I think he's going to narrow it down to a few, read reviews, and talk himself out of it.

Marriage is a lot easier when you know what's coming.

Interesting. He was headed straight to a nautical themed blue one, and at the very last veered instead for the butter yellow floral. 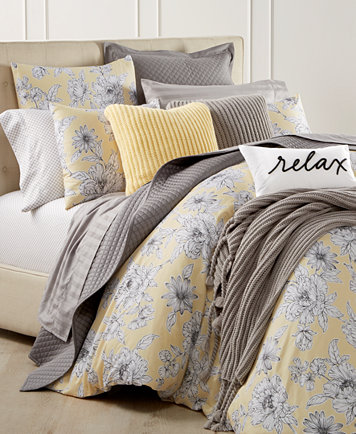 He nixed the "Relax" pillow. ("NO PILLOWS WITH WRITING THAT IS STUPID," he bellowed in the Macys.) He also went with a grey striped sham, not the matching sham, plus the solid yellow knit pillow and the grey tassel throw. This photo doesn't show the three sets of coordinating sheets that are available - all matching dots and stripes - all of which he bought. Huge Black Friday savings.

Posted at 10:23 AM in In Which We Mock Our Husband | Permalink