Here we are in costume for Halloween: 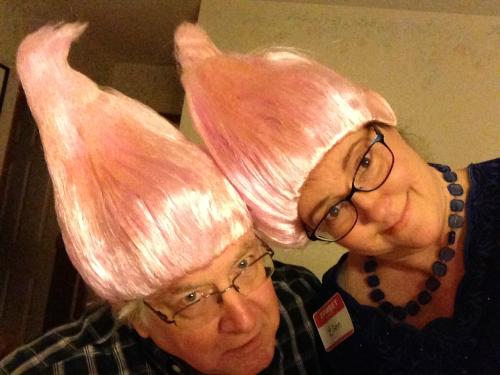 Yes, we are trolls, but out name tags say:

So, we are Russian trolls. 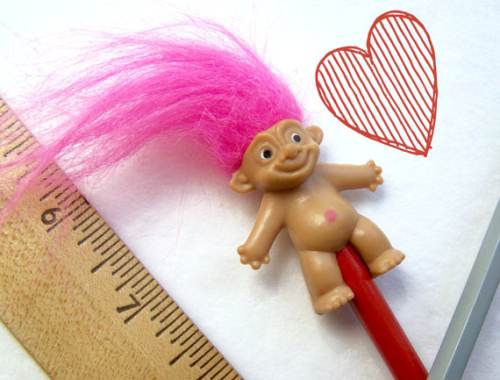 It was surprisingly easy to find troll wigs on Amazon, but you can find anything on Amazon. It was harder to find a good font for the Russian Hello My Name is tag.

As it turns out, I didn't have to explain troll pencils to anyone at the party we attended. When we walked in, the hostesses daughter accosted us before we even made it out of the foyer.

I do not spesk fluent Child, so I just nodded and smiled.

Then she pointed at my blue shirt and plainly said. "Smurf," so I was to engage her in a conversation about Smurfs until she went back to babbling.

Turns out, and people with children you already know this, there is a popular children's movie called Trolls, based I assume on troll pencil toppers, and that's why the wigs were so easy to find on Amazon. The people explaining this kept pointing at the big screen tv in the next room, and it turns out that AT THAT MOMENT the movie was on and the children were enrapt. And then we walked in as the main character. If only I spoke Child, I could have convinced the daughter that Gary and I were Poppy's relatives, there to punish her for her sins or whatever trolls do.

Amazingly enough, there was a native speaker of Russian there too. Win on all counts.

Remember we were going to the Pixies concert? Remember we bought tickets back in March? Remember? Well, we didn't. Neither of us put it in our phones, and then when I won tickets to the Katy Perry concert my concert neurons fired and I thought - oh no - wasn't there a Pixies concert we were supposed to see? And we missed it by three days. Damnit. Damn. It.

Still, we did get to see the Katy Perry concert from the TeddyJ suite, and that was nice. Left Shark was on stage a lot. I wonder if he's been a feature of all her concerts since he went viral, or if this is a resurgence. I don't think I've ever seen a show with so much stage work: sets, platforms dropping from the rafters, singers flying over the audience, dancing televisions, aliens and UFOs, and such like. It was about as far from a Pixies concert as you could get.

Gary even enjoyed it, and I had really pissed him off when we walking in. We'd walked three blocks in the pouring rain when we encountered a ticket scalper. I didn't break stride, only to say, "Stay dry," because he was in the pouring rain in a ball cap. Scalper guy said, "I can't. I don't have an umbrella."

Thirty five years ago, Gary and I were driving when he saw an elderly lady crossing the street in the rain. He pulled up next to her, shoved an umbrella at her, and drove off. That is why I only made a few more steps before I spun around and gave the scalper my umbrella.

Or, "MY umbrella!" as Gary would say for the next half hour. "IT WAS MY FAVORITE DUCK HEAD UMBRELLA IT HAD A BUTTON THAT OPENED IT WHAT WERE YOU THINKING" and so on, even while I was on Amazon buying an identical replacement.

When I spotted this T-Rex skeleton at the Home Depot, I had to think for a moment before I summoned Gary. Because I knew he would want it. 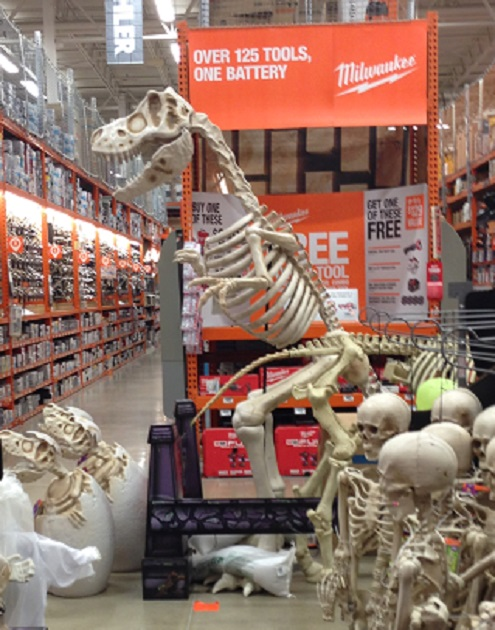 This was his response:

"Oh my god! What IS that? It's a dinosaur. For Halloween? IT'S A HALLOWEEN DINOSAUR. We could buy that! It's only" [sic] "two hundred and ninety-nine dollars. We would be 'the people in the house with the T-Rex.' We could put it in the yard. We could put an iron stake in the ground and use those heavy chains in the basement and padlock him to the stake so no one would take him. Oh wait, he lights up. AND HE'S ANIMATED! His mouth moves! Does he roar? He roars and his eyes light up! We would have to plug him in. No one would take him off the porch. That would be so great if we could put him out for Halloween. Or any party, really. Any time we have a party we would just sit the T-Rex out on the porch. You would have to start having the tea party again. AHAHAHAHA He would be a Tea-Rex! For the tea party! And you could put the party favors on a silver tray and wire it to his tiny hands!"

He slowed down when he realized they're mass produced and we might not be the only people with a skeletal T-Rex in our yard. I just know I'd better not come home Monday night to find this thing on the porch.

Day 1 - I washed my hair, did makeup, wore deodorant.
Day 5 - Did none of those things. Why would I? The heat and humidity in Florida knocked out all my good works by noon.

Surprisingly, I didn't gain any weight while there, no doubt because I walked 30,000 steps a day.

I do love those new virtual roller-coaster rides, though. They are genius. You're never more than five feet off the ground, but with the 3-D visual input and the jolting of the machine your brain is convinced you are on a roller-coaster, or being picked up by a giant ape, or plummeting to the earth. And - the best part - if you start feeling motion sickness you close your eyes. You suddenly realize you aren't really moving that much. (For some reason I forgot that little trick when I was on the Harry Potter Forbidden Journey ride. You could as well call it Hurl Over Hogwarts. It's a very convincing flying ride in which you play Quidditch and fly on a broomstick. I will not be doing any real or virtual Quidditch in the future.)

Second, I understand that Disney wants to compete with the Harry Potter World. There are only a few actual rides there - the attention to detail is the "ride." To that end Disney is supposed to open Star Wars World in 2019. So, Gary's saving up for that now.