We totally saw the total eclipse. When I booked the hotel in Cuba MO (where my Grandpa had a farm), the Path of Totality wasn't over my house. Then, last month, NASA played with the estimates and I was one mile inside totality.

Too bad. I still needed to go to Cuba for the eclipse. I needed that extra few seconds of totality, plus I had another reason to go to Cuba. I had to fulfill my destiny. I had to conquer my white whale. I had to go to ... Onondaga Cave.

If you remember, I have missed many chances to go to Onondaga Cave. Every visit to Grandpa's farm, we would beg to go, and every time the parents would say no. Then I tried to go with Gary but we foolishly went on the Lord's day. Finally, we intended to go when we went Branson, but we were waylaid by the Cathedral Cave in the same park.

But now, I can check Onondaga off the list of 6,400 caves in Missouri that I need to see. I was no more awed by Onondaga than I have been by any other cave, until we were given the option to clamber up to see the Lily Pad room. Until I saw that room I was thinking, "This is my last cave. It's slippery, it's dangerous, and if I never hear about soda straws again, and never see pitch darkness again, I will be happy." Then the Lily Pad room restored my wonder. 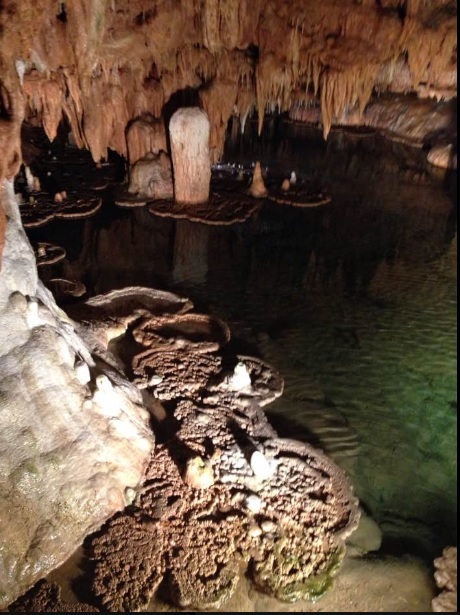 How weird is that? Something happened in that room so that when the stalactites dripped on the stalagmites, they didn't create a point, instead they hit the water and spread into a lily pad shape.

So, from the bowels of the earth to the glory of the spheres: two days later we were looking at the total eclipse. Amazing. If you haven't seen a total eclipse, here's what happens:

And, amazingly, what we saw was even more freakish than anything seen in any other solar eclipse, because we got the buildup. Past generations haven't had the glasses, we had to use the pinhole camera. This time we watched the sun be nibbled away into just a sliver, then total darkness, THEN you take off the glasses and it's like switching from a blurry 12-inch black and white TV to a 56-inch high-def full color television. The riot of color was amazing. None of the representations I saw showed the colors. The sky wasn't black, it was blue-violet. The sun wasn't white, it was a yellow ring around the moon with a burst of what looked like feathery white cirrus clouds (that roiled just enough to freak you out) and then of course, yeah, the moon was black. Blacker than anything I have ever seen. And then when the sun began to peek out again, the "Diamond ring" effect, the diamond was red!

Then of course, you have to put the glasses back on, and you're back to blurry black and yellow. Like being blind after seeing color for 1 minute and 50 seconds.

Just incredible. Loved it. And to think, it happens again in seven years in my vicinity.

Posted at 08:09 PM in In Which We Mock Ourselves | Permalink

What wonderful treasures you have built up for the memory bank. I am so jealous. Wanted to go but not well enough.
Your writing is so vivid, descriptive, worth a thousand pictures.
That cave looks extraordinary, too.

I'm so envious! Plus, that's the best description I've read, out of all the coverage the eclipse had. Well done.

Hattie - Did your kids in Portland get to see it? It's made me want to see the Northern lights again. That would be a great memory.
Big Dot - This article (https://hyperallergic.com/393623/howard-russell-butler-eclipse-paintings/) mentions how cameras can't get the color. His painting was close but there was too much nuance to the blackness. My moon was just like an utterly black hole.
Also, there's an eclipse close to New Zealand on July 2, 2019. I think you would have to see it from a boat, though. I'd bet there's a cruise being organized right now. And Dec. 4, 2021 passes over "the Southland of New Zealand."