In the early 90s, there was a serial murderer, the I-70 killer, who killed six young woman in strip malls and shopping centers along Highway 70. One was murdered near our house. Well, 8 miles from our house. It felt nearer, since it was only a mile and a half from our old apartment. (Narrow lane-way full of serial killers.)

She was killed in the Bogey Hills plaza, at the Boot Village at 2079 Zumbehl Road. I never had that chill of "My God, I was just there," because I'd never set foot in Boot Village. (Boots. Can't get them on. Can't wear the Large Calf boots either. When they start producing Large Ankle boots I might be tempted.) I frequented the Michael's craft store quite a bit, though, and Gary still buys his birdseed in that plaza.

I'd long forgotten about the murder, when some article brought it to mind, and it occurred to me I'd been to Bogey Hills frequently (birds gotta eat), but I hadn't seen Boot Village in a while. A little research and I found that the St. Louis Bread Company restaurant moved in to that address. And there's that "My God, I was just there" chill. I eat there at least twice a year.

So, when we were considering where to eat after the weekly seed pickup at the Bogey Hills bird store, I suggested the "Serial Murder Bread Company." To which Gary said, "CEREAL? For dinner? They sell cereal now at the Bread Company?"

No, but they sell bagels. 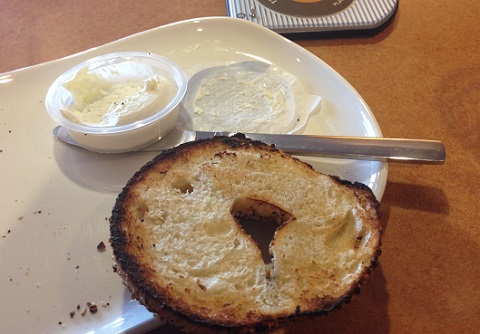 I tried to see if I couldn't tap in to some lingering psychic energy, but that faded when the real food came and I remembered I don't believe in ghosts or psychic energy. I did look closely for any men who might have looked like this twenty-five years ago:

I stopped when I realized Gary looked a little like the second photo twenty-five years ago.

Friends: the Lost Episodes - Last night I saw an episode of Friends I had never seen before, even though I made a special effort to check off every episode a while back. (I bought the ones I hadn't seen on Amazon, only a month before they went free on Netflix.) I just recently found The One Where Chandler Greets Every Woman With a Kiss after he's caught kissing Monica. For other people, this would be like finding SuperBowl II.

Exhausting dream - You know the unpleasant experience of searching for a word? Last night I spent an entire dream with Sandinistas in a tavern searching for "a word that means rendezvous, but it's Spanish and it starts with an S." "Sabotage?" "That's not it." "Tryst?" "That's not not it." HOURS OF THIS. Of course I woke up and went for the thesaurus. No such word. Cruel dream.

Movies - Gary's been on a summer blockbuster kick lately, but I convinced him to go see The Big Sick instead of whatever action movie's out this week. I found it hilarious. He hated it. I don't know if he hated the movie as much as he hated me controlling what movie we saw. Evidently there are some areas where he is the Authority, and areas where I am the Authority. Now that he reminded me of the rules, I'm resisting the temptation to exercise my authority in the gardening area. I could redesign all the landscaping and he couldn't question it. I'd better go do that before he wakes up.

Posted at 07:56 AM in Miscellaneous Mockery | Permalink | Comments (3)

As the President would say, Sad!

It wasn't organized until a few weeks ago, so you could say Saint Louis was late to the party. (Or, you could say, we were early - even Gary thinks we need more evidence before an impeachment would fly.)  I must say, the woman who organized it brought along the very best speaker system I have ever seen at any march. When the Park Service sent over some bike police, she assured them there would not be a rowdy mob. One authority figure stayed behind anyway.

It was interesting expressing one's political views as one pf a merry band of twenty, instead of buried in a mob that fills the street for blocks. We were dead in front of the Arch beautification effort, right on the edge of the area where tourists ...well, where tourists find out the Arch is sold out for the day by two o'clock. Poor planning, tourists. And when there are more tourists at any one moment than there are people in your demonstration, the tourists are emboldened to express their views, too, especillyif they can't go up in the Arch.

While we were listening to the speakers, one tourist yelled, "You lost!" The speaker at that moment was prepared with "We all lost, brother."

When the state senator was speaking, one tourist moved off to the right and started yelling over her. "YOU THINK YOU KNOW EVERYTHING WHY DON'T YOU RUN FOR OFFICE?" I could have pointed out the irony but decided to "go high."

One little child was following his family, then turned back and made mocking gestures. I decided to interpret that as his mockery of Trump.

Our low turnout made us feisty, though. We cheered and chanted with what little might we had. We did not march, but we rallied.

I wish I could show you a photo of our lawful assembly, but I didn't turn around and take one. I did take a photo before we began, and given that there are NO photos online, I give you this as the documentation that Saint Louis called for Trump to be called out for his crimes and misdemeanors. 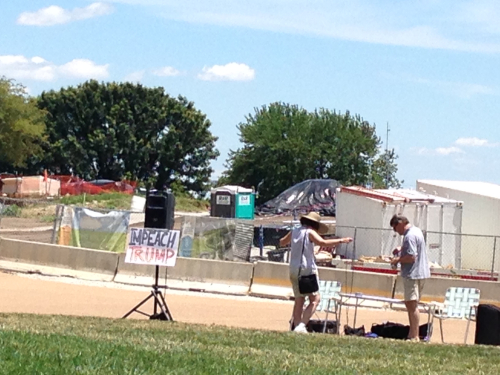