BNL gave a great, sort of manic concert. Usually, they'll giggle slyly at their own jokes. This time around they were snorting and convulsed with their own jokes. Ed was greatly amused with his own description of Jim eating salmon by hand in his underwear. There was also a frankly alarming story of how Ed had a shouting confrontation with some pinball player in the last city they played. At the time, it was peculiar. Funny, as always, but more of a desperate uncontrolled funny. Frankly, a manic funny.

Then, they'd segue to a minimalist somber song upstage that just begged for a large group of a capella musicians. They'd clearly staged that (and a few other songs) so they could be joined by the Persuasions, who weren't there because of some emergency that called them home.

As it turns out, the emergency was the pneumonia of the Persuasion's bass singer. The singer died a few days after the concert I saw.

I just cannot imagine what it would be like to perform as a happy band, and yet to think at every turn: we have to cut this song because out friend's dying, we need to keep this in the set though it won't be the same ...

So, it was hilarious. Happily, not a manic hilarious that made me worry a moment about cocaine, but a laughing in the face of death hilarious.

Posted at 11:47 AM in Miscellaneous Mockery | Permalink | Comments (2)

The opener for BNL was supposed to have been The Persuasions: the acappella group BNL just collaborated with on a CD.

That's why I was surprised to see Mike Evin post this on Facebook a few days before the concert:

I heard Mike Evin before on one of the BNL cruises. I  remembered how he said a long talk with his grandmother had led to a song. I liked that songs enough to document it in the post above. I didn't like it enough to remember all the details carefully, and I confabulated it with another song I heard on the cruise, Dancing Partner. That led me to leave this comment on his Facebook post: 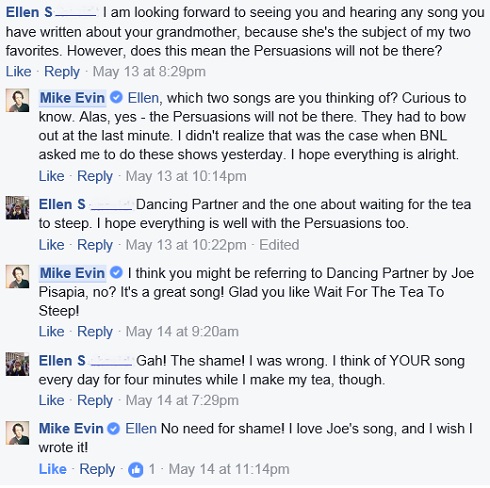 So, a little humiliation on my end, but you know me, gotta take that humiliation and parlay it into complete disgrace. (Wait for it. It's just a few paragraphs from now.)

Fast forward to the concert. The second song he played was Wait for the Tea to Steep (video here). I listened closely to all the lyrics. There is nothing, nothing in the lyrics about any grandmother. Not a word. Had I not chronicled his grandmother reference in that link above I would have thought I was demented.

So of course, I had to find him and confront him in the merchandise booth during the intermission.

"Hi. Okay, so now that I know Dancing Partner isn't about YOUR grandmother - "

" - didn't you say on a cruise that Wait for the Tea to Steep was inspired by a conversation you had with your grandmother? Or am I crazy?"

"Ah. That was a ... made up story." He left it vague so it wasn't clear if he'd made it up, or if Crazy Facebook Lady made it up all in her head.

I took care of that ("Oh, so it was a LIE!") and extracted a promise that he would write a song about his grandmother. By the time I got back to my seat I vowed never to try to speak to a musician again. It just never turns out well when I do it.

And I suppose embroidering ones grandmother into the intro for a song is fair play when you have to entertain strangers and keep their interest. He really did a great job of showmanship at the concert. Just a few songs in we were all captivated, clapping, singing along. And now I have another story to think of EVERY DAY while my tea steeps.

We went to the Peabody Opera House to see Barenaked Ladies, but while we were there we had other musical experiences. The first of those involves Pixies.

We were waiting by the Peabody box office because Gary now likes to arrive at movies and concerts hours early, as if he's going to have to go through a TSA interrogation. He noticed that Pixies tickets are on sale.

"Name a Pixies song," I challenged.

"Everyone knows the Pixies," he answered, and pulled out his credit card and bought tickets. I was fine with that, because while I couldn't name a Pixies song, I had heard their name before. This puts them in a league with The Black Crows and Goo Goo Dolls and MegaDeath: they are Bands That I Know Exist but that's all I know.

The first hint I had that they were a good band was that the best seats we could get were past the orchestra. The concert isn't till October.

I had to go to the bathroom next, and of course I pulled up Pixies on Wikipedia. I scrolled through the photos till I saw the red-headed female bass player, that's all that Gary has to know. That's why he likes them. Then I read on and saw that "their jarring pop sound influenced bands such as Nirvana, Radiohead, the Strokes, Bush, Blur and Weezer." Cool, I thought, sounds like we'll enjoy them, because three of those are Bands That I Know Exist. (And I can even name a Nirvana song.)

I found Gary standing outside the men's room on the other side of the lobby.

He said, "I think you'll like the Pixies. They influenced lots of bands, like Nirvana and Radiohead." (See above. SEE ABOVE.)

"You bastard! just read the same Wikipedia page I did!  Well. Did you see they have a red-headed bass player?"

He confessed, and we committed to the joke of being Pixies experts for the rest of the night. For example, after BNL particularly killed a song, I leaned over and said, "Still, they're no Pixies."

Of course, he has a lot of free time and there's probably a Pixies documentary. By October he really will be a Pixies expert.

It's been a busy week for the resistance, comrades!

We braved the weather, and the thunderstorms let up for the Climate March. This is the type of thing that made the ancient believe in Gods. "We are marching for you, Earth Mother, have pity on us for the two-hour window of our March." And lo, there was no rain for the duration of the March, and afterward we sacrificed a chocolate glazed donut at the Tim Horton's downtown.

Then of course, Thursday the House voted to massively personally screw me over. In the past, the ACA was a nice thing I supported for other people, and it did increase my insurance premiums at work for $100 a month, that was okay. This time, though, the AHCA didn't hit me in the pocketbook for $100, they gouged me for my health plus potentially tens of thousands of dollars a year.

The first place I went for information was redstate.com, because I figured I should go to a Republican source if I didn't want any liberal bias. What I heard was "There aren't that many people with pre-existing conditions." Given that everyone in my family had a pre-exisitng condition by 15, except for the people who got cancer by 40, that gives me no comfort.

Here's a quote from the second place I went for information: "[Older Americans not yet eligible for Medicare] will face higher premiums than they currently do, and the younger people will face [lower] premiums." So, like life Insurance, and car insurance. Fair.

But then I started to hear about how this will ripple directly into my work insurance. It could take away my home ("States get to decide if they'll cover you") and my security (My medicine will be covered until the work insurance decides I've hit a cap ... which would happen every March, I imagine, as soon as the clinical trial stops covering it in 2018).

And I know, I should look at this as "Old sick people make sacrifices so young people can have health care," only wouldn't those young people start being changed higher levels when they get sick? So, even they don't get anything out of it.

So, I was enraged. That's why Gary and I took a long lunch on Friday and gathered at Senator Blunt's office, where I accepted the first sign I was offered and was randomly interviewed by someone from KMOX. 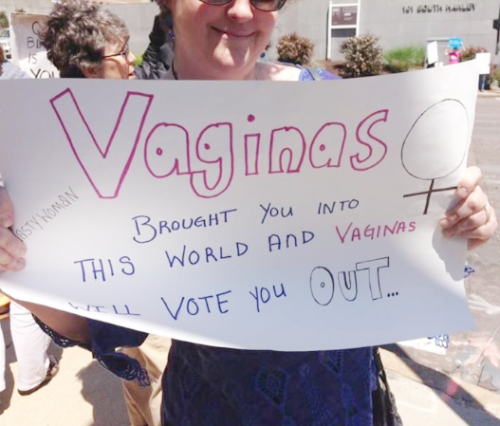 Come to think of it, maybe the sign is what drew him to me. Before he even asked me my opinion, he asked me to read my sign into the microphone. I suppose he thought if I was too shy to say "VAGINA" I wouldn't have an opinion.

(Also, my hips look freakishly narrow in that photo. I wish I could pivot to that angle whenever I meet someone in the hallway at work.)

I was actually able to string two words together, and when I was stumped I punted the question over to Gary, who answered well but was NOT quoted, because that article has exactly one point and evidently I summed it up with:

"I know how much my medication costs for my MS and they would just blow through that $8 billion pretty fast.”

.... and that was all they used of my many pithy statements.

Afterward, I did the math, and actually if you multiply the 360,000 Americans with my type of MS and my meds, that's $25B a year right there. Then I realized, nah, the givernment's not giving out the premium drugs, they'll dispense the "cheap" $1,300 a month medicine. That only adds up to $5B. Fellow MSers, let's make sure we get dibs on that extra $8 billion before those slackers with diabetes try to get some.

Gary keeps saying it'll be killed in the Senate, but that sounds too much like, "Trump will never be elected."

I don't think Gary's ever had a hobby that lasted over a year, but feeding the animals seems to have stuck.

(If you watch carefully it will become obvious that he isn't named after the president of Mexico, but after the artist. I don't know if he lost his ear to guilt over a gambling debt, or gave it to a prostitute.)

A week or so ago I was watching the raccoons while I was looking out the kitchen window. One walked directly toward me, so close to the house that I lost sight of him. I went to the back door to see if he was snuggled by the water faucet and instead, he was six inches from me, looking at me through the French door.

"You don't love us like you love the foxes," he said. With his eyes.

Posted at 07:13 AM in Miscellaneous Mockery | Permalink | Comments (0)