Cheeto necklace says, "Someone thought I was too subtle." 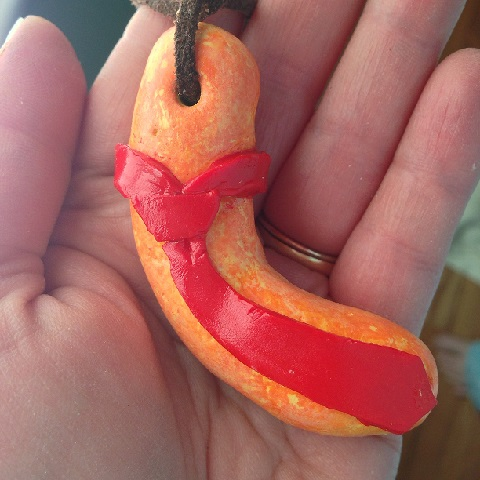 Posted at 07:49 AM in Miscellaneous Mockery | Permalink | Comments (2)

What Good Is Sitting Alone in Your Room

We packed a month of fun into Saturday.

We were among the hundreds of people who lined Market Street for the Saint Patrick's Day Parade downtown. I've never been to a parade downtown. Cheesy fun. I realized once again that since my paternal great-grandparents were both supposedly from Ireland that I am just as Irish as Gary (25%). I guess I could get one of those Ancestry tests and find out, but if I'm not Irish royalty I don't particularly care.

We left the parade early to get to the Fox Theater primo parking lot, where we hid under our coats and changed from jeans to pants because I won tickets for the Box Seats, baby. Often have I sat in the front row at a theater and considered the box seats above my head. "They are further away from the stage than my seat, but I know they cost more. What's the draw?"

On the one hand, while the box seats were the farthest I have ever been away from the stage at any venue .. 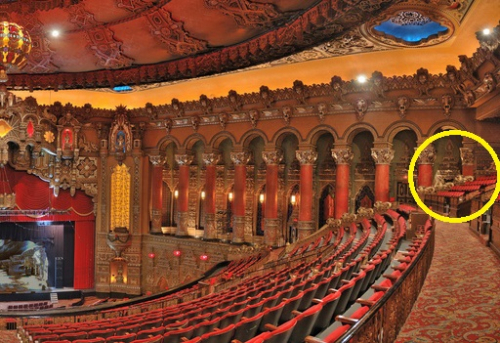 ... they were the closest I've ever been to the second floor lobby. There was a bar, a lounge, a restaurant, and velvet-curtained archways that led into the boxes. There was a waitress who came by and unquestioningly took your order of quesadillas and moscato.

By the way, if you think you've seen Cabaret because you saw the movie, you have not. You've just seen another representation of I Am a Camera. There are huge differences, not the least of which is that the movie ending is a HAPPY JOYOUS ROMP compared to the stage ending. In fact, the stage endings you can find on YouTube of the Cummings version are happier than what we got. The audience gasped and murmured because it creeps up on you. I mean, I'm not looking for a happy ending for a musical about Nazis, but ... but... I can say no more. Ask me in the comments if you want spoilers.

Then, after the Fox, Gary felt he was up for dinner AND a movie, but unfortunately he got his feet tangled in the chair at the restaurant and toppled like a tree, almost taking out all the diners at a nearby table. He's now going to pack his cane for any restaurant visits.

Posted at 09:44 AM in Miscellaneous Mockery | Permalink | Comments (2)

We Are Both Too Dumb to Be Married: Part Two - Ellen

Since he's been retired, Gary has had a lot of time to devote to his new purpose in life: Converting the World to Liberalism Through New York Times Facebook Links.

The thing is, he gets personally affronted if you do not take the time to follow the link and read the whole article. I've started to dread any conversation he starts with "Did you see the article I posted on ..."

The other day in the car he said, "Did you see the article I posted on what's happening by the Fukushima nuclear plant?" 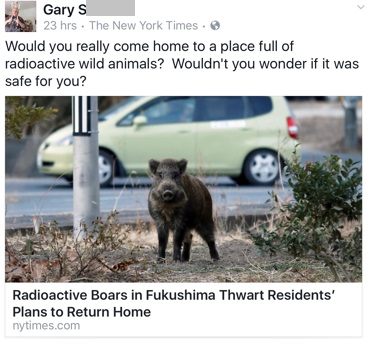 I was relieved that this time I could actually speak to at least his post, even thought again I had not read the full article.

"Oh I SAW that. You mean the one about the radioactive bears? That was scary, what happened to that bear in that picture. His face looked all distorted."

See? Look at that bear's face. "What are you talking about?" he said.

I was a little annoyed, given that I had remembered the link to the article, even though I didn't read it entirely.

"The radioactive bears. In Japan. Your link."

In my defense, the end of Radio Bikini would convince anyone that radiation could do that to a bear.

We Are Both Too Dumb to Be Married: Part One - Gary

Gary was binge-watching Marco Polo on Netflix. I was in the room, doing a puzzle on the iPad, because Being In the Room is about all that's left of our Love Languages.

Something Genghis Kahn said ("I welcome Christians and Muslims") launched a debate in our room: Were Christ and Mohammed contemporaries? Gary said yes. My position was that Christ lived about 2017 years ago (ish), and Mohammed was 600 years ago. (A minor point: I am dead wrong on this. His timeline was the year 600, not 600 years ago. Still. Not the point.)

"So they WERE contemporaries!" Gary crowed.

I looked at him. My face said, "I believe you are very generous with your definition of 'contemporary,' sir."

Gary replied directly to my face. "Yes. If Mohammed was the seventh century, they were contemporaries."

My face got louder. My eyebrows and cheeks and jaw all said, "Whaaaat?"

Gary snorted in derision. "When do you think Jesus lived?"

Finally, I am serious, I made him look up "When Was Jesus Born" on the internet before he would admit that he might have been wrong.