Every once in a while I wander about the Internet looking for information about Jerry, my technical father.

My brother Dave found him during the city editor phase. Dave and Jerry had conversations that were long on closure and light on facts. The only fact Dave could summon was that Jerry nominated himself for a Pulitzer for some reporting he did about the McAlester prison riot.

Since there was a prison riot today, it led me to idly Google my way in search of the investigative pieces Jerry did about the 1974 riot. For the first time I actually found something.

I'm not surprised I never found anything before, since I had the year wrong. He worked the riot story in 1984, ten years after the original riot. Actually, as far as I know, there never was a finished riot anniversary story, because he was arrested while investigating it. Arrested for trying to break INTO the prison.

Yes. Breaking IN. A rival newspaper published the story.

So, I can see how this seemed like a good idea at the time. You're doing a story on the tenth anniversary of the country's worst prison riot, and you want to know if overcrowding is still a problem. What is there to do but go there with an ex-guard, that guy's dad, and the dad's GUN, and count the people yourself?

Eventually the charges were dropped. I don't know if there were any repercussions from the "unprofessional conduct on Lockett's part." (I really liked that little tidbit of color. Unprofessional! That's where I get it.)

He didn't lose his job, in fact, it looks from the story above that his boss had his back. Or, perhaps "There's more to this than there seems to appear on the surface" is editor code for "Drunk."

They gave him a very polite obituary a year later, but you'll notice he wasn't an editor. 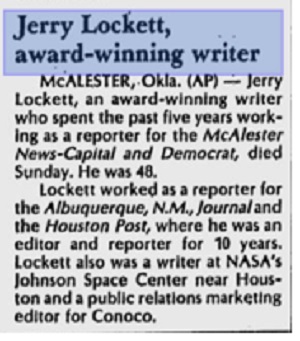