Of course we were at the Saint Louis march.

I was really astonished that with the impressive turnout our numbers were only in the tens of thousands. It certainly felt like a hundred thousand women.

When we were at 8th street I looked back and saw a crowd back to Union Station at 18th, and we were shuffling at 8th because people were blocked at 4th. 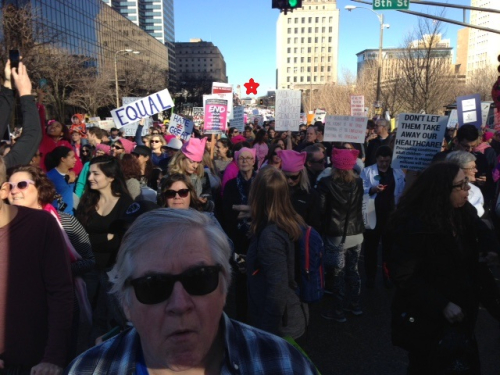 Thankfully, crowds don't bother me. The crowd stayed controlled even when Claire McCaskill joined us. We just screamed "CLAIRE!"  I did wonder if she's wearing a wig of her iconic pageboy since I think I heard she's having breast cancer issues. I've been fantasizing about getting a wig myself recently, since my thinning hair became noticeable to the hair stylist. Would I get a wig that was a better version of my old hair, or stick-straight thick hair?

Anyway, the signs were dead clever.

DID NAZI THAT COMING

And then someone bought and released two P-shaped mylar balloons in gold. Golden PP. Hilarious.

Of course, the turnout in the cities was impressive because 80-90% of the city votes went for Trump. Pretty sure if there were enough population density in the rural areas to make a march they'd have an impressive display.

(I confess Gary and I were complaining that when we've had jobs that dried up we changed careers. Of course, we had access to education that would let us do that. Then we started expressing even more privilege. "Why don't they just pack up their cars and drive to where the jobs are?" (Like the Joads in Grapes of Wrath. Because that book had such a happy ending.) Of course, what cars, and what gas, and what housing when they get to the mystery jobs. Certainly there's something the government needs to have manufactured that they could make in the rural areas. Perhaps gold statuary. Or, better, an underground bullet train system. Freeze-dried foods for the third world. We must need workers for something.)

Anyway, the march. The march ended almost at the Arch. 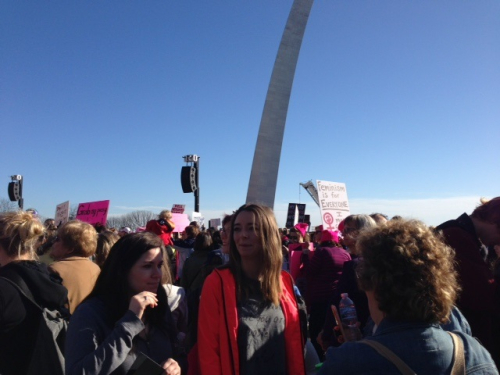 Any other year we'd have swamped the Arch Grounds, but this year the Arch is being re-landscaped so we had to stop at the old courthouse. 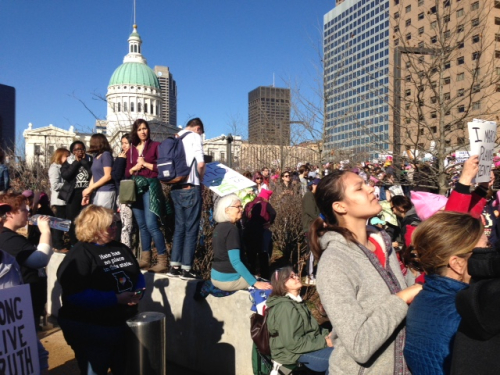 Good march. I wonder how long Trump will last.

Posted at 09:25 AM in In Which We Mock Ourselves | Permalink

"Did Nazi That Coming" - haha awesome!

Rocky cat - I know! I saw We Will Overcomb twice, but the Nazi one was unique.

I love you! Do you follow Sarah Kendzior? She lives in St. Louis. One thing she says it that the Dems screwed up by not putting more resources into "flyover country."
I was in Phoenix but did not attend the park because I was not feeling very well. Went to a museum instead, which was the second worthiest thing I could do.