Last Tuesday I thought I was well enough to go in to work, and my coworkers set me straight. In addition, enough people looked at me and said, "Have you seen a doctor?" that I made an appointment. One Z-pack and a wee vial of eye drops later and I am conderably better.

After only two days of antibiotics I looked at some code I'd written while sick and thought, "Did a child break into my database and write this crap? How stupid was I?" This morning the answer to something in my database that's puzzled me all month was lying naked under my nose.

I also got back to my guitar. I hadn't wanted to contaminate it, plus I was afraid I would have lost all my skills, but it seems muscle memory is immune. I'd say my brain and body are totally back to normal, only both times I left the house this weekend it ended with me staggering around with my eyes out of focus. Probably too soon to get groceries or blow leaves.

Nasty bug. Glad to see the end of that.

i just watched the documentary Weiner on Showtime.

I know it's a documentary, and there were probably many shots of Huma cuddling and nuzzling her beloved husband that didn't make the final cut.

I'd really recommend it.

Posted at 10:09 AM in Miscellaneous Mockery | Permalink | Comments (0)

Every once in a while TeddyJ throws free stuff at us, and that's why earlier this month TeddyJ sent us to the Saint Louis Symphony (classic!) to hear the Music of Michael Jackson (pop!).The symphony backed up a Michael Jackson impersonator. Vocally, he was uncanny, but physically he would have been better as a Ben Vereen impersonator.

Strangely, even though the full force of the Saint Louis Symphony was behind the singer, I never felt like I heard much from them, except for the strings. They soberly played their parts while the singer changed jackets, moonwalked, and at one point donned an afro wig. Took me right back to Branson, last year.

That was a surprise concert, though, and I didn't anticipate it happening so close to our planned concert: The Art of Time Ensemble (classic!) presents Sgt. Pepper's Lonely Hearts Club Band (pop!). But seeing them within two weeks of each other begged comparisons, and right now I'd be happy to ditch the St. Louis Symphony Orchestra and trade it in for Toronto's Art of Time Ensemble.

I am in love with every one of them. There was a no-nonsense cello player who had to endure silly pop singers dancing and emoting directly in her face, trying to break her concentration, and she ignored them with only a touch of a slightly bemused smile, while the man right next to her played his instrument with a giant grin on his face the whole time. The woman playing the clarinet only smiled once that I saw, when she picked it up to quack out one humorous bar in one of the Side B songs. She put the clarinet back on the floor and giggled a little at herself.

You would think my eyes would have been locked on Steven Page, but a middle-aged violinist sitting right behind him was just killing it, all the while looking like everyone's mom and/or substitute teacher. I kept thinking if I had stuck with the violin I could have been rocking out too in my sensible shoes and a black velvet shrug.

Gary noticed the violinist too, but only because there were times the trumpeter put down his horn. I took to watching Gary every time a trumpet solo came up because his head bobbed, and his eyes shone, and his fingers danced just like he was playing along. I imagine he was probably triple-tonguing inside his mouth.

In fact, I'm afraid I kind of ignored Steven Page until one of the encores, when he just unhinged his jaw and unloaded on Oh, Darling. It combined the bridge of Break Your Heart with ... with ... I don't know, Ella Fitzgerald having an aneurysm. (His face did get dangerously purple.)

Some naughty person caught the same song on video six years ago. That link is actually a much more sedate version. For example, in the video he uses a microphone, while at the Sheldon he just essentially bellowed the doors off.

My cold hasn't let up, but it is easily quelled by medicine. I brought along some NyQuil and took a shot right before we went in to the concert. For some reason, the row right in front of me was entirely empty. I could have coughed and not infected anyone. Sadly, I held hands with Gary during All You Need is Love and now he has fallen to The Illness. He feels it was worth it, though.

Posted at 07:42 AM in Miscellaneous Mockery | Permalink | Comments (0)

This Stuff Happens When You're Sick 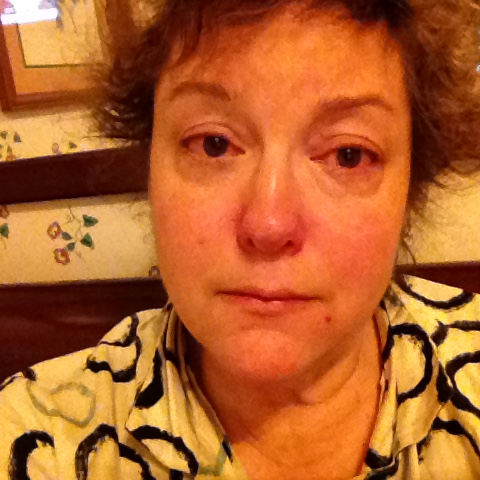 Thankfully, this sickness isn't in my chest, or my digestion. I think the day I took the photo it was in my nose. Maybe a little in my eyes. It's now full-blown conjunctivitis and it's in my ears, too. My left ear is filled with sounds of the ocean, like I have a shell permanently attached to it. This means I have three days to get better before the Art of Time concert Monday.

To that end, I've been resting up and eating orange foods and popping pills. I've taken a ridiculous assortment of sinus and cold medicines, hoping I find a magic combo that clears it all up. I think I've taken fifty pills in the last five days.

That's why it surprised me when I was standing at the kitchen sink, slapped my three daily morning pills in my mouth, and one poorly-positioned one bounced off my lip and plummeted into the garbage disposer.

I spat out the remaining two. Damnit. The one that I last was the Gilenya, the MS pill. The one that costs $210 a day. (Granted, it costs someone else $210 a day: I'm off the hook.) I stared at the garbage disposer and considered the variables.

I opted to rescue the pill. After five minutes of fishing out bits of ham, I found the pill and popped it in my mouth, thus killing off the lymphocytes that might make me better. I'm counting on my neutrophils to rally and the baby carrots I had for breakfast.

They Say Pets Resemble Their Owners

A few nights ago, Gary was posting political screeds on his iPad at 2:30 in the morning, as is his wont, when he heard raccoons shrieking and chattering right outside the bedroom window. He checked and yes, the poor babies has eaten all the food he'd given them. Like a good raccoon slave he was out there three minutes later, piling up more chow into the Cone of Food he thinks all animals prefer.

I argued how unfair it is that he is raccoon-whipped yet I can't get him to do anything. He tried to convince me that when he feeds the wildlife the animals grow devoted to both of us. "Soon the birds will be dressing you and doing your hair," he claimed.

I'd say he's anthropomorphizing the animals, but then I see videos from our backyard like this one. That raccoon has been watching Gary watch TV. They have all the same mannerisms. You could put a remote in that raccoon's hand and a La-Z-Boy under his butt and you'd have my husband.