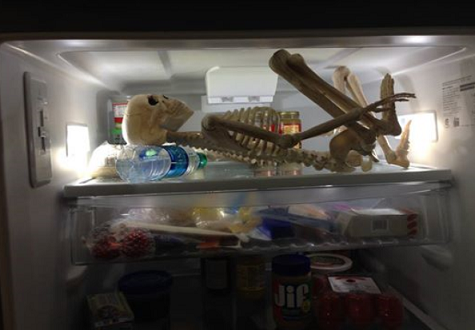 Posted at 06:14 AM in Miscellaneous Mockery | Permalink | Comments (2)

A few weeks ago, I said to Gary, "You know what's weird about this election? I haven't seen a single Trump or Hillary yard sign." 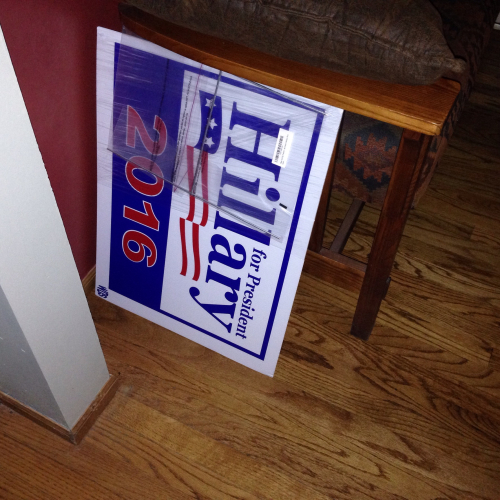 I don't want that yard sign. I'm not a yard sign kind of gal. I was, for one term, an Obama bumper sticker kind of gal, but yard signs are a different animal. First, they're far more unsightly than a bumper sticker. I don't like things sticking up out of the yard. I don't like the advertisements the yard maintenance people stick I the yard, and those are diminutive compared to a yard sign.

So, first, Ugly, and then second, Futile. No one ever drove past a yard sign and changed their vote for president.

And third, of course, is that on my working class street I could just as well put up a sign that says Egg My House. They'd appreciate it as much as I'd like seeing a Trump sign in their yards, and if I put this Hillary sign out a Trump sign would sprout up for checks and balances.

Gary is so deeply in the tank for Hillary I know he's disappointed. He sees it as some type of mezuzah, I'm sure.  I don't care. Good fences make good neighbors, and yard signs do not.

UPDATE: while I was very firm in my objection, Gary decided to compromise and put out "only one" of the two signs he bought. If we disappear blame the neighbors.

i don't know what I have against beads. Well, except that they're expensive. At least now I've leveled up from actual trash.

UPDATE: I wore it to work Tuesday and only fifty percent of the people I spoke with noticed I was wearing tiny bags of Fritos around my neck. 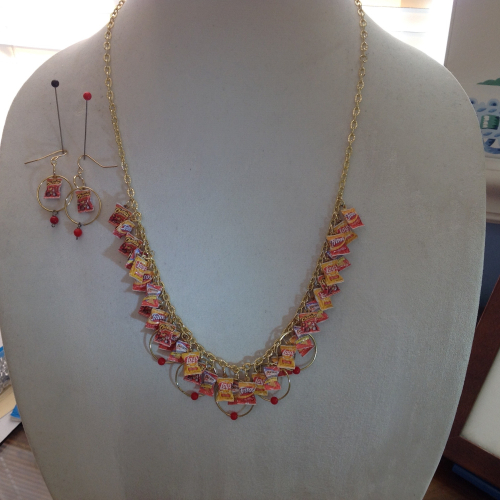 Friday, Gary and I went kayaking at Creve Couer Lake. Since then I have woven kayaking into every sentence I can. "What do you want for dinner, Ellen?" "That kayaking really made me hungry. Let's have pizza." Or, "Ellen, do you remember the last time I bought nuts?" "Friday, either before or after we went kayaking."

The actual plan was to paddleboard, but even the experienced paddleboarders said it was too windy. I saw their two-person kayaks were not the turtleneck-of-death kayak that flips over and traps you suspended under the water, but instead an open-top plastic "ocean" kayak that wouldn't flip over, and even if it did you could escape.

We kayaked for an hour. At one point an egret landed four feet from us. It was all lovely. It would have been perfect, but I fell up to my neck in the water getting out of the kayak. So close.

I felt about thirty on Friday.

I woke up well before Gary on Sunday, and I decided to do a little research on my insurance situation. My MS drug, Gilenya, goes generic in 2019, and that's when the kind Gilenya folks stop paying for it. Or rather, the kind drug "loyalty program" stops paying my deductible. I suppose since my deductible is $3k, i shouldn't care that the drug has gone from $4k a month to over $6k. All the same to me. Still, a generic version of a $6k a month drug isn't going to be $150 a month.

Still, that made me start thinking about what I'm going to do after I retire. it looks like the insurance will be $500 a month and the deductible with be $6k.

My head was full of Medicare and prescription bills when I went out to tidy up the house, and I found a pile of Werthers candy scattered across the cluttered table by Gary's recliner, and is there a better thumbnail image for an old couple? Oh, of course there is. I put the Werthers in a crystal candy dish. There, that just pins it.

Sigh. I feel sixty. And we were kayaking just days earlier.

I've recommitted to my diet. After two days of recommitting I noticed my cheekbones were more defined.

For half a week I would admire my newly defined cheekbones every time I went to the bathroom, so, ten times a day.

This morning I realized one of the bathroom lightbulbs is burned out.

Sad. I am no thinner, I just chanced into better lighting.