Symbols are There For Protest

Various people are up in arms because some sports figure won't stand for the national anthem.

In junior high we had to start the day with the pledge of allegiance.  I was one of the kids who never said the end of the pledge, the "liberty and justice for all" part.

If only we had to say the pledge before ball games. I can picture it.

The crowd starts at full volume, "I pledge allegiance to the flag of the United States of America,

(volume drops) and to the Republic for which it stands, one nation

(just a few people) with Liberty

(one old white guy) and justice for all."

Posted at 07:31 AM in Miscellaneous Mockery | Permalink | Comments (2)

When it opened, everyone went to the Ikea in Saint Louis Midtown. We went Sunday afternoon. I think if I'd been there in a great throng I would have broken free and run for the wall. It's like the British Tube had a baby with an abattoir and called it a furniture store.

I wanted to go, since I wanted to understand what all the pop culture references to Ikea meant. (And by the way, I know they want their name, IKEA, in all caps. Too bad, Ikea.)

Gary surprised me by parking in Family parking. The sign makes it clear what they consider a family.

I pointed at the sign and warned him that we didn't qualify, and Gary said, "F&^k that. We're a family. You and me, babe."  Very un-Catholic of him.

If you haven't been to an Ikea, it is a cement building designed to shuttle you like a slaughterhouse cow past displays of white furniture and random dreck with Swedish names. There is a dark gray path painted on the light gray cement floor, and if you follow the path as it angles and turns you will be sure to see every white bit of furniture Ikea makes. They have helpful mass transit-style signs to be sure you don't get lost:

After three departments of the Ikea Death March I'd had it with the forced shuffle, and we decided to hit the restaurant for the Swedish meatballs and call it "en dag." I looked around at the other diners and was surprised to see no one else had opted for the fabled meatballs. Everyone had chicken strips instead.

I though it was odd until I realized chicken strips are toddler food, Ikea is a store where you bring your family, and if the pop culture references are true, Ikea is the store where you fight with your loved ones. If the Family Parking sign is right you'd be looking after a toddler, a child in a baby carriage, and a husband as you all trudge single file past furniture and candy. Who wouldn't fight, just to feel alive?

Ugh. After that I felt bad for parking in their spot.

Sunday began with a nice healthy breakfast of this: 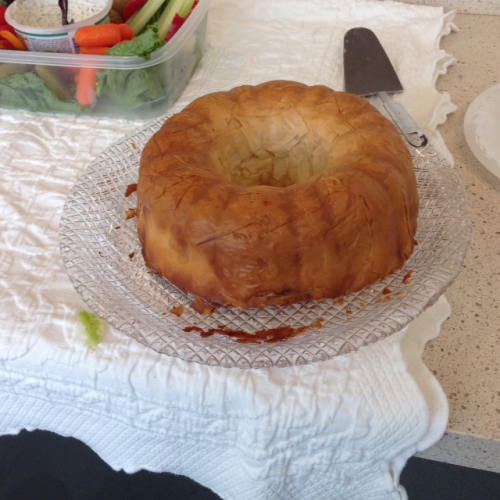 It looks like bundt cake, doesn't it? It's actually a phyllo - ricotta - herb torte. I found the recipe at one of the blogs I follow. Magpie Musing? I can't recall. You can also find the recipe at the New York Times, People at work likened it to something called spanakopita, which I have never had. It's damn impressive.

After breakfast I was determined to make it to the St. Louis verison of Edinburgh Festival Fringe. I hustled Gary out of the house at ten thirty in the morning, under duress. Such duress, such indignity, poor retired man leaving the house IN THE MORNING, my God, my God. I insisted we get there early to get a decent parking space.

Well, we got a prime space because we got there an hour and a half early. I had promised Gary a hopping street scene and the streets were deserted. It was in Grand Center, so we went back to the Contemporary Art Museum, where we were just a few weeks ago. The Cow was still enduring her agonizing breech birth, but thankfully Sunday was the last day of that. The CAM re-invents itself four times a year. It'll be closed for several weeks and then re-open with all new art.

The Fringe festival was a little like a music festival, only with theater. Unlike a music festival, there was no wandering from play to skit to monologue. You bought tickets and you didn't come late. We got tickets to see an illusionist, and since we didn't want to be late, we decided locate the venue an hour befoirehand.

A pretty young brunette saw us poking around by the Fox.

"Are you looking for the theater with the illusionist?" She was the event director for that particular show, and had she not introduced herself, I would have been taken in by the illusionist's most baffling trick. As it was, he pulled her "randomly" out of the audience. A plant! You would think knowing how a trick is done would make you not enjoy the illusion, but I find it's better. I'd rather solve a puzzle than be mystified. He did stump us for a while with a trick in which he joined three rings together, but we figured it out on the drive home.

If you'd like to see some excellent photos of the show we attended, click that link and visit the St. Louis Daily Photo blog. I visit that blog every day, and in fact that's where I'd first read about the festival, so I was thrilled to see the blogger himself taking photos. I went up to him and expressed my appreciation. Regrettably, I imagine I stepped over the line when I recognized his wife from her infrequent portraits, and then even worse, mentioned their granddaughter by name. Kind of a creepy stalker move. Ah well.

When we emerged from the show, it was to the same deserted street-scape that had led us earlier to reprise "My Time of Day" from Guys and Dolls. So we decided to head out and instead visit again next Saturday evening to see "Big Hair, Big Dreams" (the Trump Puppet Show Musical). That'll be from five till six, and then dinner, and by then the usual theater crowd will be milling around. I think that's what's been missing from my last two visits to that area.

Posted at 01:01 AM in Miscellaneous Mockery | Permalink | Comments (0)

Busy Weekend: Part One, or Saturday

After a dearth, a DEARTH of activity over here, we did enough stuff in two days to fill either one extraordinarily long blog post or three smaller ones.

So you get three smaller ones. Because I'm busy over here stringing trash together to hang around my neck -. or what Etsy calls "re-purposed jewelry with found items." There's been a Monopoly necklace, a stamp necklace, a button necklace, and a Scrabble necklace. In fact, I spent so much time Saturday turning an old map into paper beads that I didn't notice the time slipping away to two in the afternoon.

But at two, we set out to find what we've been calling "The ASMR salon."

I showed the flyer to Gary that night and he reacted very strongly that he had NO interest in publicly experiencing ASMR. So strongly that I threw the flyer away with many defensive apologies.

That's why I was surprised that he wanted to hunt the place down Saturday, and that's why we were unsuccessful - I'd thrown away the flyer. All I knew of the name was that there's an X in the middle. So, we drove to the place I thought I'd remembered from the flyer, hunted on Google maps, tiptoed up to several locked glass doors, and peek through windows to see if we could see any sci-fi headphone relaxation devices. All I know is there is an ASMR Salon someplace around west county named ___X___. Keep an eye out for it.

Our journey took us out to the fancy bead store on Olive, where there was a trunk sale and I got twelve strings of semi-precious beads for forty bucks. I have plans to string the citrine around my neck with jolly accents of dollhouse miniature junk food. 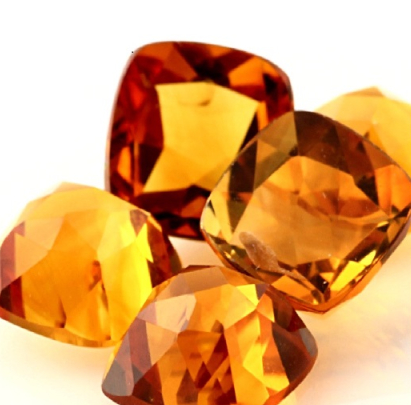 I Continue to be Spatially Challenged

I saw this photo today at work and turned immediately to the article to read more about this girl who had the stones to do a headstand on the balance beam.

Of course, she isn't doing a headstand. My mind turned this into an optical illusion and pulled the balance beam right under her head, I guess.

Anyway, I deliberately watched the balance beam competition tonight so I could witness this feat, then of course I had to go to the photos to see how I got it so wrong.

Still, given all the insane stuff they do, you can't blame me for the misinterpretation.

How Can I Be So Spatially Challenged?

We went to the Contemporary Art Museum this afternoon. (Warning: one of the installations is of a cow giving birth. I had to walk away.)

i knew the CAM was downtown. Google maps confirmed that it's on Washington, by the Fox theater.

The first revelation came when we took the Grand exit. I realized I've never gone to the Fox during the day, and I was surprised to see the Fox is on the city side of highway forty, not the south side. We always take the 20mph ridiculous cloverleaf in the dark, usually late, usually panicked. That's my excuse.

The next revelation came when I looked across the street from the Fox and saw Powell Symphony Hall right there. Again, I've been to Powell at least eight times, always in the dark, and had no idea it was in spitting distance from the Fox. My Fox neighborhood awareness goes: scary exit, SLU sign, Fox, baptist church, turn to go back home. I was gobsmacked to see Powell Hall the other side of the baptist church in the light of day.

(I also confess that on the way there I had seen signs pointing to the Grand Arts Center. "I'll have to go there someday," I thought, as I have so often before. Today I realized the Grand Arts Center might not be a row of art galleries I have in my imagination, and it might be the area with the theater next to the symphony on the way to the contemporary art museum.)

We turned on Washington and there behind the Fox was the Sheldon concert hall. I said, "Are you KIDDING me?" As before, I've been to the Sheldon, I had no idea it was anywhere near the Fox, always in the dark, blah blah blah. It started to feel like the city powers decided to rearrange all the landmarks one night at two am so they could call it the Grand Arts District. And if I wasn't actually in the Grand Arts District and that's some other neighborhood with the Pageant music venue next door to the Peabody opera house I don't want to know.

And then, THEN when we left the Contemporary Art Museum, I asked the parking attendant which way on Washington I should go to get to the Arch. (Not because I wanted to go to the arch, it's just because I wanted to get some idea of where I was, because clearly I need to work on that.) He explained the arch is east, and Washington goes north and south. This reinforced my city rearrangement theory, but still I protested that I was pretty sure that Washington was right there by the arch. I almost argued, "I know it's downtown, because it's where the hookers were forty years ago," when he said, "Oh, that's Washington Avenue. THIS is Washington Boulevard."

Seriously, though. I need to lift my head up and look around when I'm out at night.