Earlier this year I read about a lavender farm way south and east of St. Louis in Eureka, MO.

St. Louisans of a certain age know Eureka as the home of: Six Flags, a KOA campsite, and every chain restaurant known to man. Six Flags is forty-five minutes away. An eternity to a child.

We planned to visit the lavender farm, but I was skeptical that a lavender farm would thrive in Eureka, since I couldn't see the crossover between roller coasters and lavender.

"Oh no," my friends said, "Eureka is all fancy now." Evidently the upper middle class ran out of space in Wildwood and west county and spilled over into the cheap land by Six Flags.

Even though we set out Saturday at ten, the lone elk park and wild bird sanctuary are on the way, so I didn't notice the lavender farm was going to close at three until it was two forty. Luckily we were only eight minutes away, so we drove across the highway and directly into a ridiculously nouveau riche subdivision called Legends. I know this, because this is the entry sign. 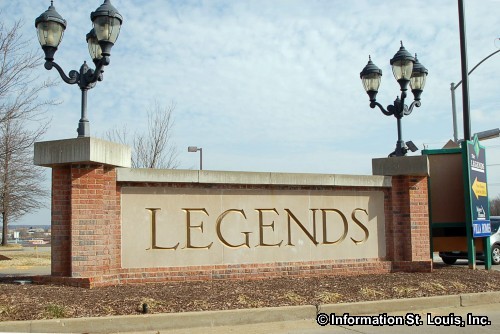 That photo doesn't show the scale. The lettering on that sign is bigger than our car.

The builders of the Legends houses must have had a competition to see how many windows will fit on the back elevation of a large house on a narrow lot. I can't speak to the fronts of the houses, we took the back way to the lavender farm. I'm sure they're very nice. They look quite tasteful from the photos.

About three blocks into the subdividion Gary joked, "I bet it's just the backyard of some lady's house."

Well, not quite the backyard. It was on the other side of Legends Parkway in what looked like a family farm, with a house and barn and a shed with a lavender roof. And ... the roof was all the lavender we saw. At the entrance there was a sign saying the recent weather conditions had severely affected the lavender crop. It has been rainy this spring, and of course the flood was all over CNN this past Christmas.

We drove in. We saw a rolling field of green."Perhaps it's the rare green lavender," Gary said.

We went in the lavender-roofed shed. The shed was decorated with the same contrasts the Legends exteriors had: one part lower middle class, one part upper middle class. From the road the outside of the shed looked homey, but your first step inside put you by an opulent fireplace that took up the entire side of the shed. I'd say one quarter of the available wall space was fireplace, so much so that I immediately thought, "That is not up to code."

The owner was bundling up lavender in the shed / tea room / gift shop. "Where'd you get the lavender?" I wanted to say. After some small talk about the soil and root-rot and the weather, she said they have another lavender farm in Salem, MO, further from the river with sandier soil. There is really no indication on the web site that the lavender is gone, but for a note that" there will be no u-pick harvesting this season."

So, that was a let-down. And, darn it all, we'd taken up so much time with the bird sanctuary and the elk park that it was time to go home. We didn't have time to see Route 66 state park. Remember the trip we took to the radiation-infested nature conservatory? Route 66 state park is built on the site of the Times Beach superfund site. That'll have to wait for another day.

Sorry you were let down at the lavender farm. :(

Kailani - It's okay. It'll just go in our bank of places to shake our fist at when we drive by. Maybe we'll try again next year.

Hattie - yesterday at the hospital we noticed the cafeteria was wall-to-wall with images of lavender fields. We were amused.