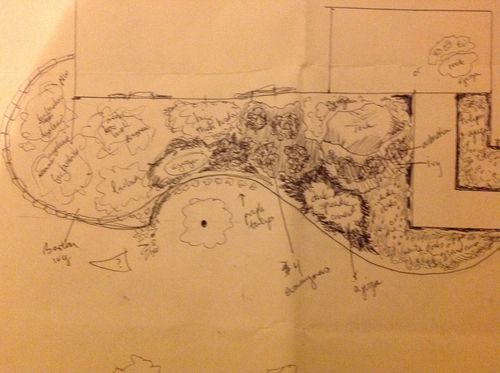 That's a plan I made for my landscaping, twenty years ago. I carefully researched every plant. I measured the area and plotted the correct distances between plants and evaluated the sun and exposure.
I researched the best nurseries in my area, Eventually, I planted it all.

Two decades later, after years of nurture, most of the plants are still with us. Some petered out, and any bulb is long spent, understandably, but other plants have stuck with us. In particular, the Boston Ivy is immortal.

I nursed that ivy. Then ten years ago I pitted it against vinca, in a vinca vs ivy death match. They both thrived. Nothing will kill the Boston Ivy.

Immortality made the ivy cocky, When the twenty-year-old ivy decided to grow under the siding this year, I decided it must be trimmed back. I started out trimming, but soon I was committed to wholesale ivy genocide. It think I left three strands because they were behind the spiky barberry.

Now, I need to fill in large swaths of dirt the ivy has sucked dry of nutrition. I made a few weak attempts at researching a new ground cover to replace the ivy (die ivy die) but I never did. Landscape planning isn't something I do in my middle age, evidently.  "Sink or swim," I remember Mom saying to her plantings. I understand her laissez-faire gardening attitude now.

Instead, I decided to wing it. "I'll just ask them what they recommend at the nursery." And there on the edge of the nursery parking lot was a pretty arrangement of plants.

I marched in and waved toward the lot. "I want that," I said to the staff. "What is it?"

"Absolutely. How big is your space?"

I paced off the area that I needed to fill, they said, "How about 5 of each," and I said, "Cool. Wrap it up." And with an additional 150 pounds of compost, I was done "planning" my new landscaping.

Of course, I knew ajuga is a weed (bugleweed) and suspected creeping Jenny was too from the name, but that means they'll swim, not sink.

Posted at 06:57 PM in In Which We Mock Ourselves | Permalink