You know we love animal parks, but the drive-through parks discourage you from touching the elk, the bison, etc. Petting zoos let you pet the animals, but that's about all the interacting you can do. Not this place. Short of tongue kissing the animals, this place had it all.

Feeding: We each got a big cup of food. There were four feeding options:

We both fed the chickens and deer by hand. Gary ignored the signs that said "Zeedonks may bite!" and "Camels may bite!" choosing instead to have the camels envelop his hands with their giant lips.

You could spoon-feed many animals, like the miniature horse above. I preferred to use the giant spoon tied to the pen, because given the enthusiasm with which some animals chewed on the spoon I feared my hand would get the same treatment. 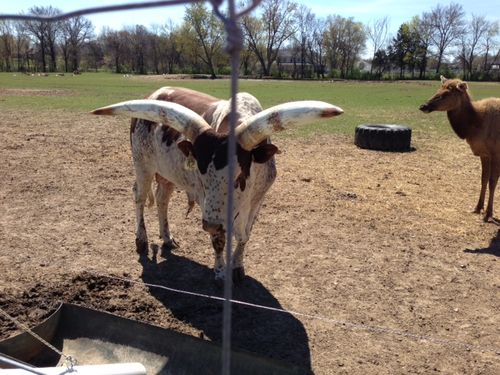 If you peek at the bottom left corner or the photo above, you can spot a PVC tube running between the human enclosure and the water buffalo / yak / moose enclosure. Gary immediately poured one half of his cup down the food slide to the trough below.

Petting: Just as it was with the feeding, there were only a few animals you couldn't access: the peacocks or the kangaroos, for example. I rolled up my sleeves and petted the goats. If you've petted goats before you know why I protected my sleeves. I kept my hands away from the Zeedonk ("Zeedonks may bite!"), but of course Gary had to pet it.

I gave the alpacas all the love I could, because since that one Branson alpaca spit on Gary they are my faves. Gary avoided them, which wasn't hard because they were penned into a roomy stable.

He had less luck avoiding their cousins the llamas. When I heard a teenage girl scream, "Eew! It just SPIT on me!" I assumed the llama was no longer armed. I walked right up to them, but Gary didn't take the chance. The llama sensed Gary's fear and started moving along the fence toward us. Gary followed the fence away from the llama. The llama moved faster. Gary jogged along the fence looking steadily over his shoulder at the llama. The llama broke into a trot. Gary broke loose and ran. He ran away like a little girl.

Riding: As soon as I saw Big Joel himself (a distinctive bearded man) leading the camel ride I was there, ticket in hand.  I asked if my ride was a camel or a dromedary, because I never can remember which is which, and Big Joel said "He's a hybrid. That's why no one else wanted him." The camel certainly didn't seem to have a dramatic hump, which made him a comfy ride.

After Big Joel said that, I started looking for flaws in all the beasts, as if this was Big Joel's Home for Misfit Animals. The horns on one horned creature didn't curl symmetrically. One peacock was albino. The moose was a runt the size of a Great Dane. It made the whole exhibit have a charm you don't see at the St. Louis Zoo, and I liked it. It was charming, and fun, and well worth a drive to Wright City. If you feel the need for some animal saliva I highly recommend it.

Ive done the popsicle bit with parakeets. Some of those animals are strange to me, like the whatever it is with the big horns.
I got to feed kangaroos in Tasmania, but they were very tame.
Animals are very relaxing to be around, don't you find?

Hattie - I think the horned one is a water buffalo. It's an interesting combination of relaxing and exciting. Watching a big animal lumbering around is relaxing, but knowing it could stomp you is exciting.