Gary was in charging of picking the entertainment in Branson. Besides the Dixie Stampede we saw two other shows: one Legends show with singing celebrity impersonators, and then a small, low-key family show, the Magnificent Seven.

I didn't expect to like this very much, but on the whole the impersonators were convincing. Gary said he had heard of the Elvis impersonator before. In his ... research ... on ... Elvis impersonators? I don't know. In the old days I would have scoffed, but who knows what he does on his iPad all day and all night. Maybe he reads up on celebrity impersonators.

In addition to Elvis, there was a pretty good Adele. I even cried during Somebody Like You, but as NPR has told us, that's because of the music. On the other hand, the Blues Brothers ... the real Belushi was fat. Gain some weight, Skinny Belushi.

Okay, so during the Legends performances we were treated to video of the real deal so we could be awed by the resemblance. The Michael Jackson imitator did a very good moonwalk, had a good MJ "woohoo," did a presentable "sha-mone," but he was white. That wasn't that big a deal during the late-era MJ songs, when MJ was himself more ivory than ebony, but then they had to do Thriller. So we had a dance-off between pasty MJ on the stage and a younger, browner MJ on the video screen. Very jarring.

This was not the big glamorous Vegas-style show that Legends was. We went here because one of the Seven sang at a diner we'd stopped at for lunch, and she was pretty good. She sang boppy little fifties ditties and I think Gary got a little crush, and so he searched out the show. It began with an introduction of the family who staged it ... and produced it ... and sang in it ... and I would say they painted the set only the paint was wearing off the set. Paint your scuffed-up risers if you want to be magnificent. That would go a long way.

When I accepted that I was watching a family who said, "Let's put on a show" - and I mean they literally had their ten-year-old out there tap dancing - I scaled down my expectations and I was entertained. The family were three of the seven, then there was the woman we saw at the diner, another pair, and a tenor named Dusty Something. Ohhhh. A tenor. My God, I love a tenor.

When I heard the strains of "I Want You Back," I thought, oh, oh this will not be good. And while they were not actually in blackface, there were four grown adults and one ten year old playing the Jackson Five wearing Afro wigs. I was speechless. I was aghast. Then again, maybe I'm being too politically correct. Click that link and let me know.

Show vs Show? I have to go with the more professional Legends show.

This Branson Road Trip grew out of a desire to go to Onondaga caverns. I've never been. Years of driving right past it on the way to visit the grandparents every other month. Never been.

Guess what? Still never been.

When we got there, there was a tour leaving for the more natural Cathedral Cave, and that cave took it all out of us. Exhausting! Clambering up and down seven stories worth of ramps not to mention the half mile walk to get there and same amount to get back. After that, we opted to see Onondaga on another day. I'm glad we saw the semi-wild cave instead of the show cave. Usually, I turn up my fungused white nose at most show caves. But, if you're going to be a show cave, be a show cave. Have Kate Smith singing God Bless America. Have a red-white-and-blue light show. Or even better, go through that cave in a motor vehicle ...

What got us down to the Branson area were the billboards for our next cave: Fantastic Caverns, America's only drive-through cave. Of course, you don't get to drive you own car through the cave (but, someone should totally DO that). Instead, you are loaded on a wagon pulled by a jeep. 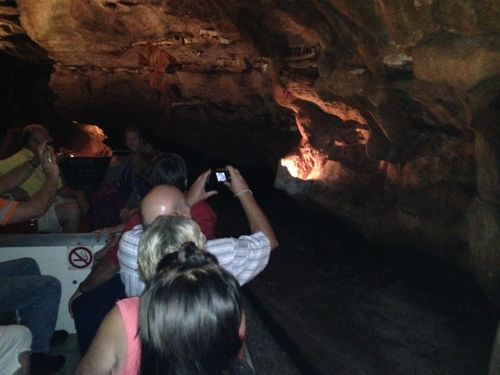 It's a poor picture, but you can see the appeal. Photos are allowed, plus there's no creeping through slippery limestone, hanging on to a cold calcified metal handrail. This cave embraces its Baldknobber / Buck Owens heritage.

All cave guides must acknowledge the cave trifecta:

"How deep do you think this pool of water is?"

And that's the one that does not fly in rural Missouri, where all the caves are. I've never seen anyone in a cave protest that the Bible says the world is 5,000 years old, but I'm sure that's the reason Fantastic Caverns planted this sign: 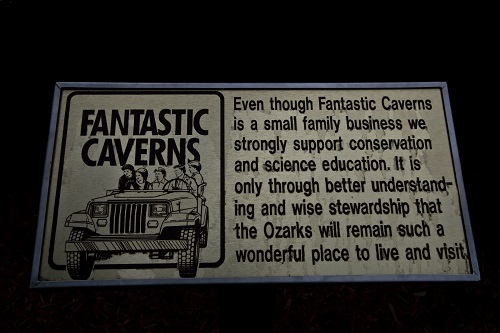 Look at that paragraph. It offsets those secular words like "science education" with all the fundamentalist buzzwords like "family" and "business" and "wise stewardship." In other words, "we're all Christians, here, friend, so don't cause a scene when we say God started working on this cave half a billion years ago."

Cave vs Cave? This is a tough call. Perhaps there was some glory at Cathedral Cave that I couldn't see by flashlight. But, just as one well-done Michael Jackson beats a Jackson Five, a poorly lit rock cathedral can't beat a well-illuminated rock formation. 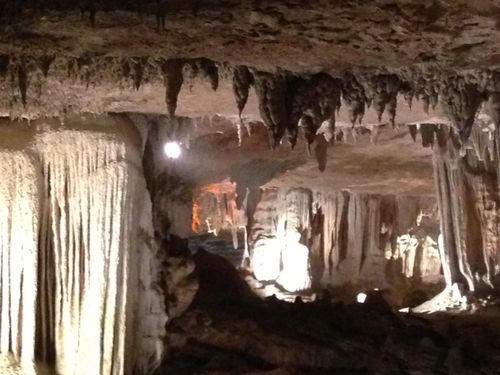 hahaha I lost it at the afro wigs. I don't know what offended me more: The afro wigs, or the fact that the kid was seriously behind tempo.

Naw, just kidding. It was DEFINITELY the afro wigs.

You sure get around.
-I scaled down my expectations and I was entertained.- Been there myself.
That last photo blew me away.
When did everything get so retro, I ask myself.

Too much PC Koolaid. When Eddie Murphy did a satire of Mr. Rogers were you properly offened? Then shame on you.

RockyCt- Let me tell ou, that kid's heart was not in it. She needs to watch a few episodes of Dance Moms and work on her Maddie face.
Hattie - Especially when it's retro and I remember it as new...
Zayrina - You didn't referwnce White Like Me?
http://www.nbc.com/saturday-night-live/video/white-like-me/n9308