The two best things about our trip to Branson were the very first thing and the very last thing.

The Very First Thing on Our Trip

The first thing we did in Branson was to visit the zoo. It was not your typical zoo. It was The Promised Land Zoo. Two things were distinctive. First, there were Bible verses hammered up everywhere. That's fine. I'm glad they want to see me saved. Has anyone ever been saved by reading one of these cherry-picked strings of verses, though? Perhaps they think I'm on the edge of salvation and the Roman's Road will push me over.

Second, the animals were in easily accessible enclosures, and you could buy cheap food, and if you could reach the animal you could feed the animal. This is not the way things are done in the world-famous St. Louis zoo. However, as you know, Branson values are: God, family, country, and gorging on obscene amounts of food (coming soon to this blog: Dolly Parton's Dixie Stampede).

So did we feed the animals? Sure we did. Watch as Gary feeds the alpacas.

The Very Last Thing on Our Trip

You'll notice several simlarities in these two videos. First, both involve wild animal encounters. This one is at the Wild Animal Safari Park outside Springfield on the way back home. You can't feed the animals there. You aren't supposed to have your window down, but Gary kept teasing me by lowering the window around any terrifying creatures.

Second, both the alpaca video and this water buffalo video have very poor camerawork. Gary missed getting the actual moment the alpaca ... uhhh..interacted with him, and I missed the interaction below because, well, because I was in abject terror. Evidently, the survival instinct is Fight, Flight, and whimpering "eh eh eh" like a mewling kitten.

I know! I could have ended up with this dirty boy. 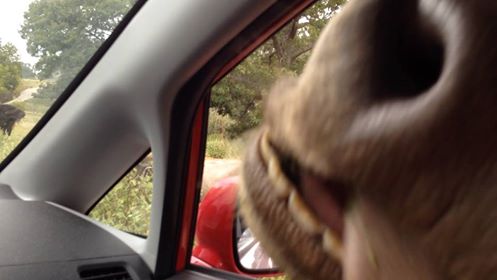 Posted at 10:06 PM in In Which We Mock Ourselves | Permalink

Hee! Branson sounds worth it just for the hilarious blog posts. I'm happy to visit by proxy, though :).

And they say flyover country is dull! I was in Peru and saw lots of alpacas and not one of them spit on me!

Lynn - There were times I was slack-jawed and could only say, "this has to go on the blog."
Hattie - Did you SEE that alpaca with its Johnny Dep hairdo? It was nuts!