This is when I usually give up. You would think that I could look at photos of myself at 110 and find encouragement there.

I do not look good thin. I could get a job as rapper Iggy Azalea's body double. 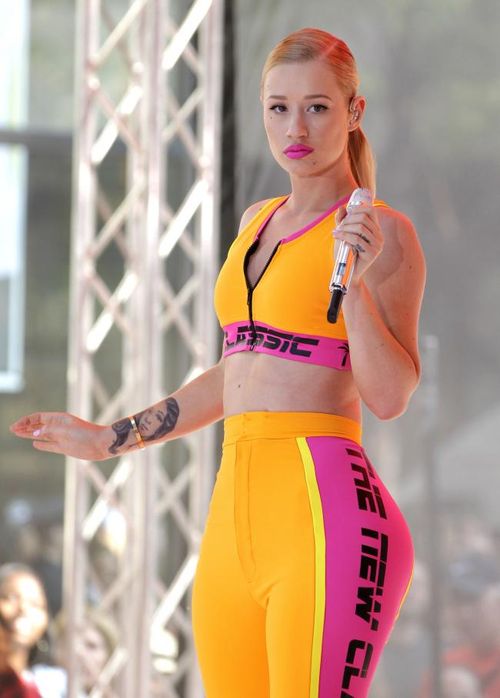 The first time I saw Iggy I thought, "I know you, girl." Business on the top, party down below. I wondered if Iggy was, like me, a nice girl born in a caricature barmaid's body.

In case you think I exaggerate, this is Iggy in a bikini. 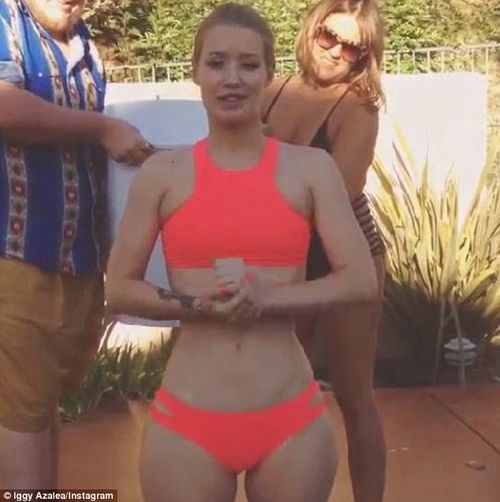 Below: me in a bikini. It's like a living optical illusion. 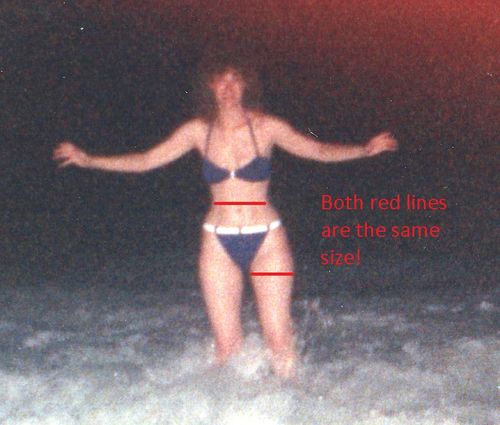 See? That's my goal body. And frankly, fat me can find clothes that fit more easily than me with the Iggybutt up there.

I don't mean to slam Iggy's figure; it's a great figure... for a rapper. It was a bad body for a virginal Baptist girl who wore pinafores until the week the puberty swelled everything up into a sex cartoon. I wore lots of bulky plaid shirts in my tweens, is what I'm saying.

If I had that body now ... not that that could ever happen ... I'd have to wear baggy plaid shirts to work. That body still doesn't suit me. Actually, I don't think my waist will ever get that small again. If it did I could pack thirty pounds on that waist and look normal.

Posted at 11:13 PM in In Which We Mock Ourselves | Permalink

C'mon. You don't want to end up a skinny old hag. I'm letting my hair down here, because usually I'm nice about this stuff, but I was at a party yesterday, and all the women there over age 60 were gray and wrinkly and saggy and misshapen and some of them had even shrunk. A lifetime of diet and exercise had brought them to this pretty pass. Such good little girls.
I am lazy. I will exercise, but I don't mind lying around the house and getting plenty of rest.
The women who age fastest are the yo-yo dieters. They lose muscle, and when they gain the weight back it's all fat. I'm big, but it's nice to still have a firm body and defined figure at my age.
Rejoice in your hourglass proportions! I don't know what your height is, but I'm almost five feet nine inches, have not shrunk at all, have no hip or knee problems, have not gone grey and weigh around what you do.
And still don't get the senior discount automatically. Really, I would rather look big than old.
I like taking up my fair share of space in the world!

That's true, I know many people who lose the fat and also lose the stuff that fills in the wrinkles. And that's amazing you are five nine! I would have guessed five five. But I'm not healthy like this, at all. I'm enjoying eating healthier, since I feel better in the mornings.

Queen: Well, I back down then. It's tough once you have the weight and it's making you feel bad and yet at the same time you can't lose it. So I apologize and wish you success on your weight loss endeavor.

Hattie - no problem. Were we arguing?

Well, I was thinking about my own issues, not yours.

I have the Iggy body, too. I'm happy with my weight but I've often fantasized about opening up a new shop called "Pear" where all the cute sundresses are tiny on top, nicely full and rounded on the bottom. There HAS to be a market for this, right? Good luck with the continued weight loss!

Lynn - Well, I hope Pear has shoulderpads in everything, because we pears need that.