So... the Chicago vacation wasn't all fun. (I include walking ten blocks in a downpour as "fun.") There were some low points.

For example, TicketMaster should indicate the height of everyone in the first row. I would not have purchased my second row tickets had I known someone seven feet tall would stand in front of me and not move in to the mosh pit to dance until seven songs in. 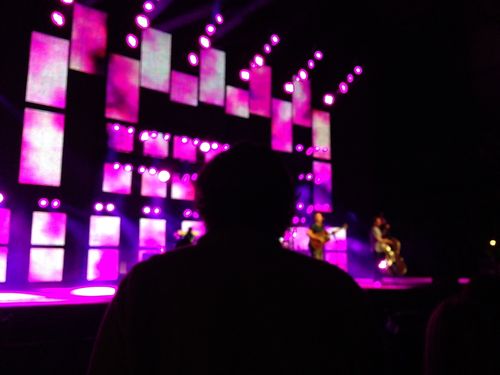 It was also terrifically cold. BNL made bank on sweatshirts.

Low Points on the Road

The person will the greater control issues must be the one who drives. For some reason we forgot that. I took the wheel twice and both times I was in tears in a half an hour.  Gary says one should drive the speed of the traffic. He interprets that to mean that if someone passes you, on the left or on the right (as is legal in Missouri), then you should drive that passing car's pace.  If someone else then passes you, you must then accelerate even more to drive that new lunatic's pace. It results in Gary driving in the far left lane faster than anyone else.

Gary just said the other day that he'd like to take more vacations in driving distance. This puts me in the role of navigator, which I hate.

Really, REALLY you say? I cannot be the expert even if I am the navigator?

The iPhone GPS has alleviated a lot of those problems, still there was a moment when we told Google maps to direct us home, then decided to get dinner. I chose some place off UrbanSpoon and tapped for those directions. It took five minutes of going in circles, backtracking before we realized we had two computerized voices giving us directions: Google still pointing us home and Siri taking us to dinner.

I blame the map of Springfield for this one. We wanted to visit the Frank Lloyd Wright house. The map noted that with a 4 in a circle, yet I headed for the 4 in a square. I assumed the map was wrong, not I, and relied then on Siri. Gary still believed the map, and gave up on Siri a block before the turn for the actual house. We adjusted course for the Lincoln museum, and we were hot, and he told me to step off the curb and I did, then he physically yanked me out of the oncoming traffic, then I yanked his arm, then he shoved me. No punches were thrown. But honestly, fighting in public.

I mention all these low points because a woman at work yesterday was showing photos of her happy family white water rafting and roller coastering, and I moaned that the simple stress of driving to a city we'd been to five times before was too stressful for us and we fought. "Oh!" She said cheerfully, "We fought more on this vacation than ever before! We had to have a Family Meeting!"

It made me feel so much better.

Posted at 07:48 AM in In Which We Mock Our Husband | Permalink

I remember when I use to know loads of their music. Now I can only remember the songs from the CD Snacktime. Thanks kids.

Sarah - Just this evening I made a playlist and thought, "I Know? They did a song called I Know?" I had to play it to remember it. And I don't have kids I can blame.