Before we went to Chicago, I had no idea that:

We stopped in Springfield on the way down, and we saw the penultimate game televised at the Bennigan's.

(About Bennigan's. We ate at Bennigan's because it is exotic. We've never been. I believe the Bennigan's location map shows Bennigan's all over the United States, with a big ozone hole over Saint Louis, where there is no Bennigan's. It was obscene, I had a Monte Cristo Sandwich and promptly gained four pounds. How do we even know about Bennigan's, you ask. Bennigan's is Butter's favorite restaurant on South Park, that's how.)

So, after we saw the Blackhawks had one more game to go, we were pleased. "Cool," we thought, "Chicago might clinch it when we're there. There will be a big celebration and we'll get to see it."

Well, they did clinch it. Clinched it while we were at the Second City performance. One of the troupe came out and announced it. Then the rest of the troupe then did an improv on White People Rioting Over Sporting Events. ("Why do they burn down their own neighborhoods?")

We laughed, until the Chicago natives behind us mentioned there might indeed be some fires.

Of course, I don't know how they've celebrated in years past (evidently they win the Stanley cup as often as the Cards win their baseball division), but there was no mischief. That night people on the streets yelled, people in cars honked.

The next day we saw this outside the Art Institute: And then this inside the Field Museum: 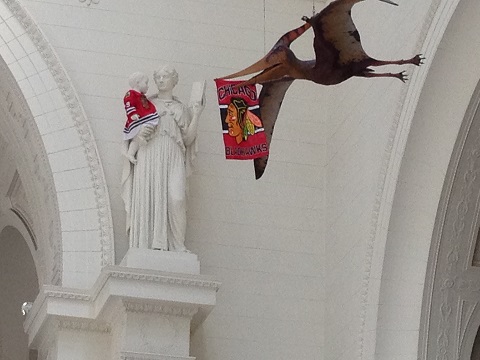 And we didn't see it, but this is how they celebrated at Shedd Aquarium. (Jersey-wearing seal at one minute in.)

Barenaked Ladies even had a Chicago Blackhawks interlude during If I Had a Million Dollars.

The mayor announced there'd be a parade, then the parade route was extended because they had to move the post-parade celebration from the muddy Grant Park to Soldier Field and people were pissed, and finally the local news spent half an hour giving Dire Warnings about access to the city on Thursday - the day we had scheduled to leave town at six p.m.

Gary was alarmed. "What if they block the streets while we're trying to leave? What if we can't walk to where we parked the car? The news said to wear your red jerseys. WHAT IF THEY ASSAULT US FOR NOT WEARING RED JERSEYS?" Not making that up.

As it always is, it was up to me to make Disaster Plan B. We agreed that if the streets were still blocked EIGHT HOURS AFTER THE PARADE, that we would leave the hotel and spend the night in the Fit (the seats fold down; it's a selling point) and drive home Friday.

Or course, the next day streets were fairly empty until you got right up to the parade route, which was one street past where we planned to spend Thursday: the Art Institute. There, it got a little crazy. 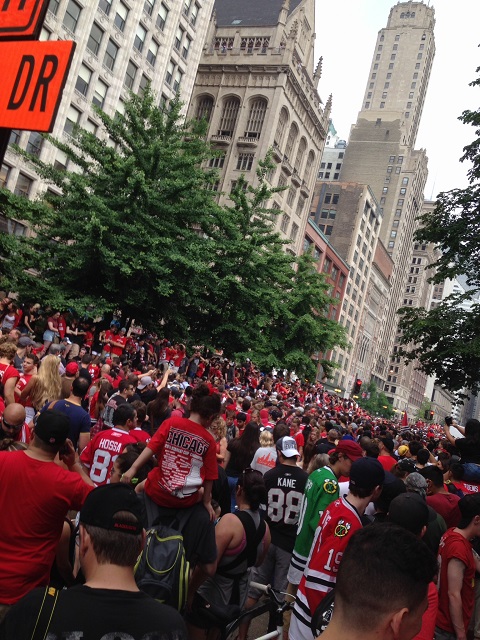 (I don't know what that guy in the green jersey is thinking. He's going to be ASSAULTED.)

However, it turned out that the parade passed the Art Institute just as we were looking at the modern wing, so we got to see the parade from air-conditioned comfort. 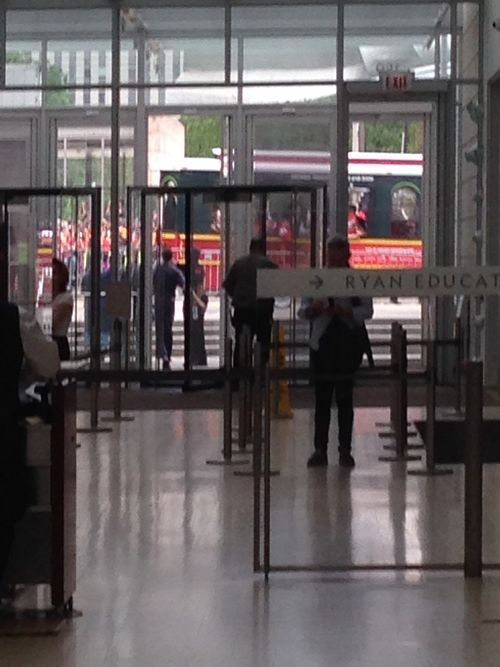 Evidently they commandeered a bus for every player. You could judge the player's popularity by how loud the crowd got when their bus went by. The loudest screams came for the bus with the person carrying a large, shiny silver object, which I have told myself is the Stanley Cup itself.

No fires, no rioting, and we got out just fine at six.

The next two weeks will be book-ended by two bridal showers for my niece, and in the middle is a trip to Chicago to celebrate our thirtieth anniversary. I can't even remember thirty years ago. Back in '85, it had been six whole years since Affirmed won the Triple Crown, our years began with a one, gas was $1.20.

Technically, the thirty year gift is pearl. Pah, pearls. I'd rather have Chicago.

And because a trip to Chicago didn't adequately express our luuuuvvvv, we tacked on a pre-trip to Springfield Illinois. It'll break up the drive to Chicago.

THIS trip to Chicago will be unique in that we will have TWO non-museum activities: the river cruise and  Second City. The rest of the time will of course be spent in the Art Institute, Field Museum, Shedd Aquarium, and all the usual haunts.

And yes, yes, there's a BNL concert. Is it my thirtieth BNL concert? Probably.