Gary looked up from Facebook and announced that his old friend Regina wants us to go to a Trivia Match.

He hates trivia, and I love it, so we've never been at a trivia match together. However, since he knows Regina, there's an option for him to volunteer and for me to kick serious trivia ass.

"What charity gets the proceeds?" I asked.

I spent at least a minute wondering why Jimmy Buffet would play at a St. Louis trivia game. Then I laughed and choked out "Buf-fay!" A buffet where we eat shoots and leaves.

However, Gary still insists it might be a combo Jimmy Buffet concert and trivia match. He isn't touring in July. Could be.

Update: I'll be damned. It IS a jimmy Buffet tribute concert. Not Jimmy himself, but an imitator. Good thing I found out: I would have been expecting food.

After I graduated high school in 1980, I spent a semester just hanging out and working at the library. (It was my little rebellion - not marching directly into college. My 52 year old self is appalled and ashamed.) One day I found this odd daytime TV talk show. I distinctly remember the talk show host looking at the camera sardonically while it "snowed" in the studio. I liked it. I was not surprised when it was canceled.

When I eventually trudged to Indiana University, that same peculiar host did a night of stand up at IU for $20 a ticket, which was out of my price range or I would have gone.

I only stayed at IU one semester. I was back at home when I went from watching Nightline - which at the time was Ted Koppel giving a twenty minute nightly update on the Iran hostages - and a commercial came on. I switched channels, left the room, and shot back in when some strange foreign woman started talking about sex. I hadn't had sex yet, so I need to hear what this Dr. Ruth woman had to say. Then  I saw she was talking to that same guy.

"Hey, it's that guy!' I said, then I became a fan and drank the KoolAid and bought the sweatshirt. 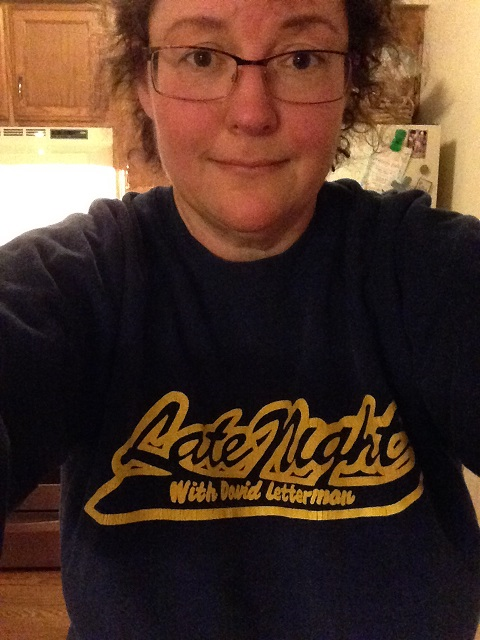 (That thing must have been huge on me when I got it over 20 years and 100 pounds ago. I've just assumed it didn't fit.)

I watched Late Night devotedly, Late Show a little less devotedly, and eventually I switched to Mom's favorite show, The Daily Show with Craig Kilborn, when Dave went through his regrettable Grimacing Period.

Since then I've watched devotedly in spurts, usually after he shows up in the news ... after 9/11, heart surgery, blackmail, the Oscars. "Pah!" I say to Jay Leno and other nice guys. "Find me some clinically depressed weirdo, that's what speaks to me."

Posted at 07:56 AM in Miscellaneous Mockery | Permalink | Comments (4)

Never having been pregnant, I've never had to calculate when a pregnancy began or when it should end. I know sometimes it's easy, because two separate sets of friends have dated a conception back to when they "had all that tequila." (One was going to name the child Patron.)

I remembered when Gary claimed to hear the hawk carry off the raccoon and the ensuing shrieking and tussling. That was March 4th. Could that have been the start of some baby raccoons?

I strongly suspect our raccoon is pregnant, because she was fat on April 10th, per this Facebook post:

So, shrieking on March 4th, then fat and hungry enough to eat at dusk on April 10 ... how long is a raccoon gestation? I asked Google. Google screamed back: 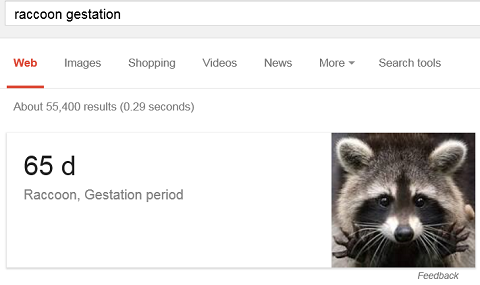 So, then she'd be due on May 8th, about a week ago. I spent at least two hours this weekend as a slim raccoon draped herself over that same pear tree limb and began eating at 3:30 in the afternoon. She stopped after two hours, when she climbed to the ground and ate mud and seeds that had fallen out of the feeder. I think she might have been the pregnant raccoon, all slim and hungry from breastfeeding.

"WHERE ARE YOUR BABIES" I yelled in my head. "I NEED TO SEE THE BAAAAABIEEEES!"

Internet sources say the babies stay in the nest for four weeks, so no babies until June 5, assuming of course that we have exactly one raccoon couple and they had sex exactly once, which is a ridiculous assumption.

The June 5 date does sound feasible, because on June 18, 2013 there were documented Baby Raccoon sightings.

So! I might take that whole week off. Because human babies, boring. Raccoon babies? Adorable. Mom must have been bitten by a raccoon while pregnant with me, because that's the only way my maternal instinct leans. 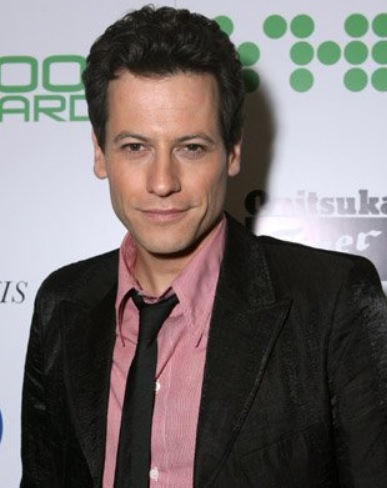 How is it possible that Forever: a tv show starring this very pretty man, could be canceled? Sure, some times it was a poor American imitation of English charm. Often it was often schmaltzy. But look at that face. Pretty. In fact, so pretty we never called the show by its given title. Instead, "It's nine o'clock. PrettyMan is on." Speaking of names, PrettyMan himself has an absurd Welsh name: Iaon Gubbledrought or something.

Look, ABC, I am fifty two and it takes a lot to catch my eye, and PrettyMan had what it took. I can tell that you groomed him to target my age group. You kept putting him in three piece suits, and those haven't been fashionable since I was in high school. I know your game.

And then just in case my fifty year old hormones weren't stimulated yet, you paired him with my teenage crush, Judd Hirsch from Taxi. I'm surprised you didn't give Peter Tork a recurring role.

So now I'm sad. I won't get to spend Tuesday nights watching PrettyMan model Facial Hair Through History. No more puffy shirts or outrageous scarves or waistcoats. No more wondering who Judd Hirsch got his Jewish inflections from if he was adopted as a baby.

However, grabbing that photo from IMDB did make we aware that Iaon ... Iano ... oh, fine I'll look it up again ... Ioan Gruffudd starred with Benedict Cumberbatch in Amazing Grace. So that sounds like a nice Sunday morning snuggled up with some tea and Netflix.

Posted at 12:42 AM in Miscellaneous Mockery | Permalink | Comments (4)