Little has happened in my life lately. I am reminded of Mom, who would gauge her existence by how many capers and schemes she had going. If there was a plan to move the furniture, or dig up bulbs, or freak out her friends with a fake tattoo, then all was well. Unlike Mom, I have no capers or schemes in the offing.

Well, I do have one scheme: to learn to read music. I've had a musical breakthrough since Christmas. I've realized why I have no passion for the guitar. I'm playing the guitar because I can't carry a tune, and yet all I've tried to play is rock guitar, which has no tune. It's all accompaniment, and no melody, unless you sing the melody in your head, and it seems my head can't carry a tune either. When I realized that problem I switched from playing chords to playing solos: still, a solo isn't a song.

Recently, though, I found some arrangements for fingerstyle guitar, and that changed everything. Fingerstyle is like touch typing for the guitar. Instead of holding a pick and plucking a series of strings, you have assigned strings for each finger. You get yourself positioned on 'home row' and then you just pluck the string with the fingernail of the assigned finger. Not only is it considerably easier, but you can play the accompaniment with your thumb and the tune with your fingers at the same time. After only a few weeks I can now slap out "Fur Elise" and "Danny Boy" and a variety of hymns. In fact, I've moved past slapping them out and now I even try to add a little schmaltz.

Sadly, I realize I'm going to run out of these 100 fingerstyle arrangements that spell out what fret and finger I should use for each note. While there are countless rock arrangements for those who can't read music, it seems that if it isn't rock they don't give you any shortcuts. Since these folk song arrangements I've been playing are essentially eight notes, I'm sure I could translate eight notes on a staff to eight notes on the guitar. It's not the Enigma code.

Someone suggested I have Gary teach me to read music. I laughed, of course.

Gary's playing the trumpet again, now that his teeth have been through the Invisalign gauntlet. Straight teeth were the first step toward getting his embouchure back. (That's the first time I've ever seen that word spelled out. Never would have guessed at that spelling.)

He hasn't been bold enough to play his trumpet when I'm around so I can't be overtly supportive. However, since Gary realized it's his birthday month (this dawned on him on the 15th), he's been sending me emails at work thanking me for the musical gifts I've gotten him – or rather, alerting me that I've gotten him gifts.

"Dear Ellen, thank you for the Bach trumpet mouthpiece you just got me for my birthday. You're the best. Love, Gary."

A retired man, a birthday month, Amazon Prime, and a hobby: a potent combination.

Well, I got the clever idea to hide the rat in the Rock Boat luggage, and all would have gone well only Gary decided I needed to add a pillow to the bottom of my suitcase.

"Yes, this pillow has to be at the bottom, and I don't have room. Just pull everything out and re-pack it."

He ruined the great Rock Boat Rat Shower Reveal I had planned. It would have been great, great I tell you. Unbeknownst to me, he packed the rat late that night in his luggage, and I was surprised to see it in a Miami Hotel Rat Shower Reveal.

It's hard to hide a rat in a tiny cruise stateroom though. This was the only true surprise I pulled off. 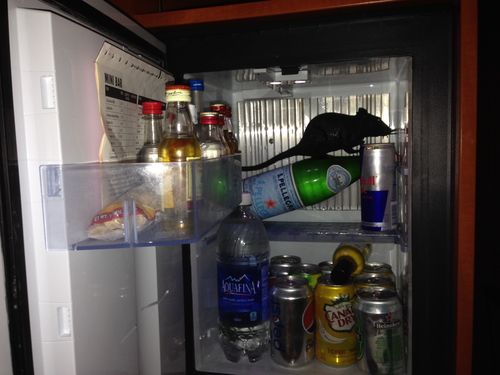 We'd just started on our neighborhood walk when the woman across the street called out, "Hey, my husband saw six deer in your front yard at three last night."  Gary speculated the deer must like the tasty, tasty nitrogen TruGreen's been spraying on our lawn.

Every night since she told us there were deer in the yard I've found myself awake at three. I always check, but no deer. I blame Gary's subconscious for what happened later that same night.

He woke me up at two."Ellen! Wake up! The animals are fighting in our backyard."

I immediately asked, "Is it the deer?"

"No, it doesn't sound like a deer. Come listen."

I listened out the back door, but of course all was silent. He then insisted he was listening to his iPad through his earphones at two a.m. when he heard animals screaming in the yard. He took off the earphones, and heard the sound of animal flesh hitting the ground, more screaming, and some rustling.

He added, "It sounded like something smaller that a deer, but bigger than a cat. Like a raccoon. But I don't see isn't any blood or fur, so whatever was being attacked must have crawled away. Or maybe some animal flew away with the body. Like an owl."

And from these words grew what I will in later years call the Legend of The Owl-Raccoon Beatdown in The Backyard, in which Gary saw (with his own eyes) an owl swoop down, tussle with a gang of raccoons, land some round-house kicks, and fly off with a screaming raccoon in its talons. I will weakly protest that neither of us saw a thing, but will be shouted down. He saw it, he was right there!