The Sun Is Setting On Tuesday Night

Days like today I wish I were an emotional person, able to fling myself wholehearted to one side of a debate or another, instead of someone who keeps asking why. "Why?" is not a good question to ask today.

I also want to forget the image of her husband comforting her, then yelling, "Burn this bitch down."

I want to forget the image of police officers wandering about while a store is actively being looted.

And of course, the images of all the looting and arson going on last night.

I really want to forget about the split screen of President Obama's comments contrasting with the small group of looters running like hell down the street to attack a police car.

And then, I think, why did the Police leave an unmanned police car sitting a block from the police station when they have a huge parking lot?

I really want to get the image out of my head of a black protestor standing across from the police line last weekend yelling at the officers, "White pussy is the best. You got a daughter? I'm gonna rape your daughter." (I think this might have been what prompted the police to write in their report that the protestors were exercising their constitutional rights and insulting the officers.)

I spent way to much time trying to work out exactly how long someone should lay in the street after being shot. Evidently Officer Wilson says people lay in the street for hours all the time. But how many hours? First the dispatcher got the call wrong, the examiners were at another scene and there was a skeleton crew, the photographer needed new  batteries for the camera, the crowd thought the people there to take him away were the police and wouldn't let them on the street that was only open from one side because the police had blocked off the other.

While I was trying to clock out what an acceptable length of time would have been, I shared my thoughts with Gary and, Lord, you would think I'd turn to stone. Horror. "She lost her son! That's all you need to know!"

Ha! Captain Ron Johnson is at this moment calling for us to use reason. No! It sucks! No fun at all. There's no catchy chant for "On the other hand!"

Then of course, I realize that if you keep looking from one hand to the other you never get off your butt twelve miles away and march with the right side.

All I know is, I keep going back to Wikipedia to see what made the LA and Watts and Detroit riots stop, and it seems pretty consistent: the National Guard and police start mowing people down. Of course these people will be unarmed, and the Guard will be threatened, and that's what started it all.

Heads-Up From the Universe

Saturday morning I woke and wondered, "I wonder if my great-aunt Rose Mary's dead?"

I haven't met many of my grandmother's siblings, given that they almost all live(d) in Marion Ohio. I met Carol once, Jimmy once, Margaret lives only in photos, and Marshall was incarcerated in the Home for the Criminally Insane and Mom never even met him, given that he was a pedophile.

However, I've met Mom's favorite Aunt Rose Mary several times. She is the one who lives in the biker community and has her eyeliner and lipstick tattooed on.

I did wonder why she crossed my mind Saturday morning, and decided it was because I'd recently used the china she'd painted. So, I Googled "Rose Mary B_______ obituary."

The very first Google hit was a Marion Ohio paper, and I feared the worst. Surprisingly, Rose Mary was not dead but was the surviving sister of Great Uncle Jimmy, recently deceased, whose obit I'd found.

As I say, I met him once, but it was memorable because Jimmy was the one who let on that Marshall existed, which forced my Mom to explain why she and her sister Delores had to wait in the car while GrandCeil visited her brother at the psychiatric hospital. He also said I resembled Aunt Delores, which was magical because I've never resembled any relative I've ever known.

Creeeepy. I met the man one time and I get a yen to check up on his sister the day his obit hits the paper.

Not as creepy: he'd actually died a week earlier. The Marion Ohio paper must save up its heavy news for Saturday.

Remarkably, Aunt Rose Mary lives on, and she's sixteen years older than her brother, if not twenty.

("Sanitary details" was our family term for pads. Or, I could have called the post "rat matresses.")

All symptoms of menopause have cleared up. No hot flashes, no dryness. Instead, I am making up for all those period-free years. The OB-GYN said that since everything had looked good, my options were: hysterectomy / hormones.

I filled the hormone prescription, but then I thought of a third option: wait it out. Seriously, this has to end sometime. It went on a five month hiatus over the summer.

So, last Tuesday I was in the bathroom at work and discovered that my uterus is still acting like a teenager. I fished a quarter out of my purse and went to the box on the wall, only to find tampons were all sold out.

I'm a little tampon-shy since one went AWOL recently. Well, not AWOL. It wasn't missing in action, I just ... forgot about it. Thankfully after two days it said, "Get me outta here," and I was all, "How did you get in there?" Late night half-asleep visits to the bathroom can make you lose track.

ANY way, I opted for a pad since I didn't want to trek unprotected to another bathroom. This is what I got for my quarter: 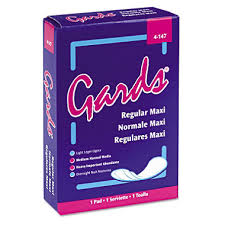 "Typo!" I thought. Gary's theory is that it's a deliberate legal misspelling, like "Cheez."

Wine Is The New Orange Crush

In other words, wine is something Gary will take to like a duck to a big old lake filled with expensive wine.

In the fifteen days since the wine party, Gary has purchased:

The final straw was the aerator. Seriously, it's a pricey plastic sieve, and he tried to convince me that his research claimed pouring wine through this sieve would dramatically improve the taste of wine.

"Taste. Test." I demanded when it was delivered. He agreed.

I took the control sip of some dry white "oaky" wine. As always, it made me shudder. Blech.

I took a sip of the "aerated" wine. That little plastic thing had worked magic. It was like the Miracle at Cana: stomach acid into wine.

"That can't be," I thought, "Maybe my tongue's drunk." I took a sip of the non-aerated control again. Shudder. Yechh. Another sip of the aerated one. Delicious.

So, while the aerator was a good purchase, we now have this wine monkey on our backs, and friends, he is an expensive monkey. So...

In the fifteen days since the wine party, I have purchased:

Now when I am paid, all the discretionary post-bill income goes in to one cash drawer. Then, as we put money on the credit card, the play cash moves from one drawer ("Money We Have") to another ("Money We Spent").

On the very first day of this experiment a quarter of the discretionary income went to two bottles of wine. Horrifying. However, a day after that we scored a free bottle of wine, so that's a bright side.