One morning this past week I saw Gary outside feeding the birds, leaned out to kiss him goodbye, shut the door, threw the deadbolt, as you do, left for work.

Gary, who was of course locked out, wandered the neighborhood. After ringing about five doorbells, he found a neighbor who let him use the land line. Gary called the only number he remembers: his parents.

Gary's parents got him in contact with his sister. His sister gave him my work phone, which he somehow misdialed. He left the neighbor's house, and his sister then drove to our house, called her husband, her husband looked up the name of my multi-national company and got a branch office, called that number, and the office administrator there looked up my number and gave that to them, as well as sending me an urgent email.

This is when you'd expect Gary to get on the phone and RAIL at me, yet he did not. He was so agreeable I should lock him out daily. I came home immediately, of course, and we made plans to write down phone numbers and hide keys.

He has done neither. Instead, I was outside this past weekend, just for a moment, and when I tried to get in the door was locked and Gary was sitting at the table, pointedly ignoring me. He read his iPad with great interest, stroking his chin, nodding at the Times while I scrabbled piteously at the door. "Let me in! Please!"

The first thing when he let me in? He ducked his head and proudly said, "Days. I have been waiting days for the chance to do that."

Last Thursday I had a 4:30 appointment with the psychiatrist. I left well ahead of time, since I remembered that one time I got so lost at that hospital. I actually arrived at St. Luke's ten minutes early.

"Wow," I thought, "They were doing some construction the last time I was here. They really changed a lot." After trying in vain to find the doctors building, I wisely called the office.

Voice mail picked up, then added, "Our office is located at 9098 Clayton Road."

Then I remembered the doctor hasn't been at St. Luke's for six years. I have driven to that Clayton location six times and totally forgot.

"I'm an idiot. I totally forgot you moved."

"I've never had an office at St. Luke's. I worked at St.John's - " which OF COURSE is the hospital I went to six years ago and got so lost at.

It does explain why St. Luke's looked so unfamiliar. I think I've been there once, on one of Mom's appointments. It did give us something to talk about when he asked how my MS is going ("No cognitive problems?" he asked with a little smile.)

The really sad thing is that now that he's taken me off the medication I never have to see him again. No more appointments, and here I've totally figured out where his office is.

Greetings From St. Louis. I was at a bar last night and the conversation at my table and the table next to me was Ferguson. Some day I'll tell you about all the pies we've been baking, but in keeping with the Media it's all Ferguson all the time.

The Reason Why We Can't All Just Get Along

Youthful testosterone. That's why we can't have peace. Police perched on their tanks swinging their ... their automatic weapons at the crowd. Calling the crowd "fucking animals." Scary testosterone. Young men the same age, different skin, throwing bottles full of machismo. When I saw the video of Mike Brown intimidating the store owner, I thought, "He'd make a good Ferguson police officer." My mind is at rest, now that I can blame all the cocky young men, armed and unarmed.

I FInd A Lost Love on the TV

Years ago, a friend brought some barbeque to Elliot Co., and it was a pork steak. Not the fatty cheap pork steaks you marinate in Bud and put on the Weber. This was a  porterhouse of pork. When I asked where it came from, he said "Red's." I drove all over Natural Bridge road try to find them, and couldn't. The internet gave several locations, and none panned out.

And of course, watching the coverage this week I saw the sign for Red's Original Barbeque, checked with my friend, and he said, yes, that's the place. So when we all go back to Ferguson to throw money at it after the unplesantness is over, I'm headed for Reds.

When Will It Be Over?

I did a little research on riots and was discouraged to read they are over when the National Guard comes in and shoots people. Then it's over the next day. They've kept the National Guard at the command center so far, thankfully. Someday it will be over. Antonio French will be move to Ferguson and be mayor, bottle-throwers will be given a badge and a paycheck, and there will be peace.

Or it might be over if the grand jury speedily indicts the officer, but I don't think that's going to happen.

The Riots Next Door

Everything with an arrow next to it is a St. Louis suburb I have lived in for more than a few months. 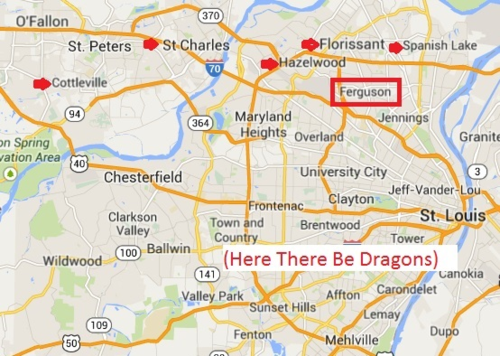 And, if you've seen the national news this week, you know that Ferguson, the suburb with the box around it, has gone from protesting to rioting to looting.

All this to say the rioting, tear gas, and news crews are hitting close to home. My dad graduated from Normandy, just like Michael Brown, the unarmed black teen shot by the white police officer. The Walmart that was looted is 3.2 miles from Mom's house, a house I still own. I went to school in the Ferguson-Florissant school district. I got my Brownie uniform and Gary got his letter sweater in Ferguson. (Yes, at Fisher's, thanks for asking, St. Louis people.) The curtains that are still in Mom's den were bought at Northland mall (yes, Penny's basement), where the police set up their command post the night they threw the tear gas.

So, so odd to hear the President, Wolf Blitzer, and Rachel Maddow even utter the word "Ferguson."

I tried to think of how I would describe Ferguson in relation to Florissant. I don't call it "the next town over." If someone says "I live in Ferguson," and I live in Florissant, I'd say, "Oh, that's right next door." (And then I would say, "Where did you go to high school," because that's what we do.)

And here's where I confess my ignorance. When I heard there was looting by the West Florissant exit on 270, the exit we take every time we visit the in-laws, I thought, "Not to worry, that's on the Ferguson side of the highway." As if looters bounce off some invisible boundary. But then, and my ignorance continues, I was even more relieved to hear speculation that the looters were actually "the usual suspects" from East St. Louis, where we keep our criminals. Not the nice people of Ferguson. Ferguson, which is predominantly African-American, but still has an almost solidly white police force.

That's why when the protestors are told by the police to go back home, they respond with "YOU go home." Because it's a safe bet those white officers don't live in Ferguson. It makes me smile.

I know St. Louis is criticized for these very strong ethnic boundaries. It's not just race, it's religion (Creve Couer, I'm talking to you, possibly in Yiddish), heritage (The Hill, capisce?). I think we have only one town, University City, where you'll find every race, ethnicity, and religion. University City: it's where we keep the tolerant people.

I have to say, even if the half-hinted-at police version of events are true (the young man reached for the officer's gun), I'm still on the side of the protestors. And even the rioters, as long as they have bad aim. Not the looters, of course.

And here's the oddest thing. It's summer. In St. Louis. In August. Usually that's perfect rioting weather. In the 100s, hot, sticky. Not this week. I think the gorgeous mid 70's - low 80s temps, along with the clear skies must be keeping things calmer than expected.

This is me buying a toilet seat:

This is Gary buying a toilet seat:

Bidet feature - off the table, only available with elongated seats. Well, at the hardware store anyway.

Stay Side brace - nice to have, keeps seat from shifting off the hinge-y thing that attaches it to the toilet.

Slow-close - key for some, but we generally keep the lid up anyway

Quick-release - vital. Lets you easily take the whole seat off for ease of cleaning. Gary says THAT'S the reason he never cleans the bathroom.

I had no idea ANY of these things were available. I am amazed. Have we always had these features and I ignored them, or did toilet seats get damn fancy over the last decade?

"Spare no expense!" I cried, because if you use something five times a day money is no object. My guess is he'll go on the internet and find the elusive heated antiseptic round bidet.