I've been very clear with Gary for the last six months. "I want one of those SodaStream devices for my birthday."

They were the go-to gift for Christmas one year. You make your own soda! Given that the soda we like (Diet Orange Crush) has gone from $3.50 a case a year and a half ago to FIVE DOLLARS A CASE CRIMINAL RAT BASTARDS, and given that we drink four cases a week, I felt we could save some green by cutting off the Orange.

The only problem is that a SodaStream costs almost a hundred dollars, and while we'd quickly make that back in homemade soda savings, it would only work if I could be sure this wouldn't happen:

Gary takes his first sip of homemade soda. Clutches throat, reels, gags out "I can't drink THAT," and drags the device out to the curb.

That was one issue. Another was that it looked ungainly and plastic to me, and at 18 inches high I didn't know if I wanted it taking up valuable counter real estate.

We were at the Bed Bath & Beyond debating the SodaStream, asking strangers who bought the soda juice if they liked theirs, when I glanced across the aisle and ... saw... 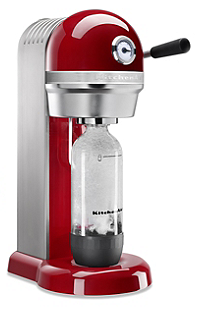 It's like some marketing executive saw into my soul and said, "You are a shallow, status-conscious woman who cannot reconcile her new found desire to save money with her long-held desire to appear rich! Hahahaha! Your weak mind will bend to my KitchSoda AidStream mashup!"

And I wanted it so much, so much. At only twice the price of the regular SodaStream! ONLY TWICE THE PRICE.

But, the marketing geniuses overplayed their hand and brought into my problem into sharp contrast: I am both status-conscious and money-conscious, and that is an impossible combination. It turned me against SodaKitchenStreamAids entirely.

Gary carried on, weakly suggesting we could get a regular Middle Class SodaStream, in keeping with our station, and have fun mixing our own flavors. "It would be like cooking with soda!" I then pictured:

Gary takes his first sip of homebrewed Dr. Pepper-Cherry-Orange Crush soda. Clutches throat, reels, gags out "I can't drink THAT," and spits soda into the sink.

Instead, Gary bought some water flavoring drops and is commited to drinking more water to cut back our $100 a month soda budget.

So, instead of getting me a SodaStream, Gary has relied on his own devices. Therefore, for my birthday I am getting a pie carrier, a phone case, and ...

A sex toy. (Or should I say another sex toy?) It is a stand-alone G-Spot stimulator. I've been quite happy with having my G-Spot ignored for thirty years. I don't know what may happen.

Perhaps I will try it, then gag, then reel, then choke out "I can't use THAT..."

Ah, We Have Fallen Into the Trap

Well, we did pretty well. We got through a year and a quarter without having an epic fight about retirement financial role reversal.

Originally, I was relaxed, and Gary was stressed, and neither of us counted pennies. Now, Gary is the Relaxation Expert, and I am stressed. What provoked the epic fight? He wanted to buy $300 of birdseed the day after he drained our account of all discretionary funds.

“Gary, we have eight bags of birdseed in the basement.”
“Ellen, relax, we'll just put it on the credit card.”

Commence fighting. I'm overreacting because I'm the one who made sure all debts were paid off before retirement. Putting stuff in the card makes me hysterical. I feel like I've fought cancer, and I've relapsed and Gary is saying, “Relax, it's just cancer again. Its just for a little while.”

But now due to a perfect storm of an unexpected BNL cruise, the renter holding my feet to the fire, and a birdseed sale, I find that some things have to go on the credit card, just for a month or so.

So now I'm overreacting and I'm being that spouse, the spouse I hate, the stingy spouse. Of course, any spouse who isn't Gary is stingy. Gary is the guy who bought 21 gifts for my 21st birthday. I'm insisting that for this birthday he buy me a collapsing hose. (He already bought one for his Dad. It's this year's iPad.)

Of course, after the fight we both swung too far the other way, and now Gary is feeding the birds two-thirds less and I'm ignoring the credit card bill. I haven't paid it off in two weeks and I have no idea what it is. La la la.

The day after the fight I found this article on line.

CAMDEN, Maine (AP) — Charles and Lisa Black moved to Maine after careers as teachers in Kansas, pursuing an idyllic retirement that prosecutors say was destroyed by arguments over money and infidelity before both plummeted off a cliff.

Prosecutors say 71-year-old Charles Black hit his wife on the head with a rock before pushing her off the 800-foot Maiden Cliff in April 2011 in in Camden Hills State Park. Lisa Black, 55, says she believed Charles was chasing her when he, too, tumbled down the mountain, according to a police report.

I immediately emailed it to Gary. When I walked in that evening he said, "Did you hear about that retired couple who tried to kill each other?"

"Oh, the story I emailed you?"

Gary sides with the husband, who claims he never hit his wife with a rock, the injury she sustained to her head came when he hit his head on her head as they tumbled down the hill. After he bought birdseed he didn't need, no doubt.

Gary's sister, mother of the Niece and Nephew, divorced for twenty years, found love again and was married in Kansas City this past weekend.

We were the only ones in her family able to attend. Gary was tasked with getting everyone there virtually. The parents of the Bride wisely opted out of the technological challenge and watched videos after the fact. However, the iPad test with sister of the Bride was so successful that Gary decided to wear the iPad as a strap-on, leaving his hands free for the video. Here he is modeling it before the wedding: 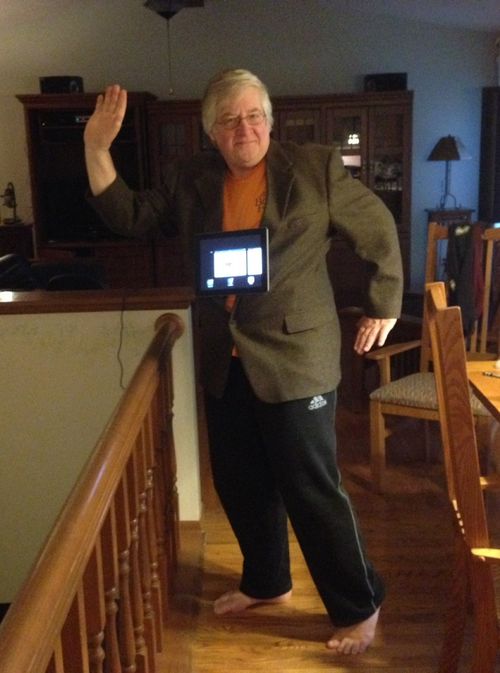 We tested the son of the Bride's connection while we were at the motel, and it worked well. (I don't know if you can really call the place we stayed a hotel, since there was no point on the toilet paper. The towels were used, and the air conditioning didn't work. Gary only tipped $1.25, that's how bad.) Between the motel and the groom's house where the wedding was held, we spotted a a porn store in "Knobtown Strip Mall," and right after that a billboard for "Fantastic Caverns." Hence, Gary's new pet name for my privates is now "Knobtown Caverns."

When we arrived, we found that there was no functioning wireless network at the venue, but Gary had previously set up his iPhone to act as a hotspot as a backup. Sadly, the son of the Bride left his work connection and went home, where he was not connected, so that didn't work, The sister saved the day by emailing him some screen grabs from the Garycam and phoning him with the audio.

Because he looked so professional in his suit and iPad, whcih left both hands free for videos and photographs, the other six people at the wedding - the groom's family - assumed Gary was the photographer. 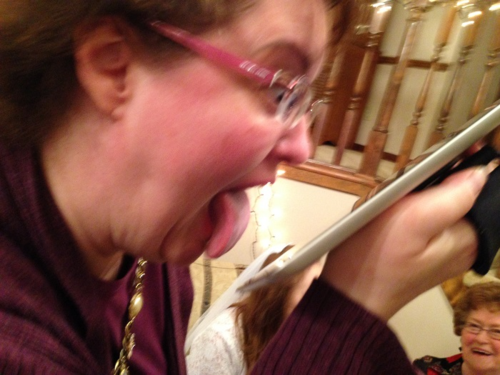 That's me trying to disgust my sister-in-law after Gary unbelted her from his chest. It's a sad state of affairs when I consider that a flattering photo of me. See the lady laughing? That's the mother of the Groom.Very pleasant.

In fact, afterward Gary and I were talking about how nice and laid-back the groom's family is, and he said, "It's because they're boat people."

I thought I'd missed an interesting immigration story. "I'm sorry?"

"You know, they go out fishing on boats and wear those boat shoes with no socks. It makes them more relaxed." So, evidently it's not nature or nurture, it's boats.

The groom's family did joke a lot before the wedding about how "It's not too late," "There's still time to run." After the macho bro-talk, I was delighted the groom broke down in great heaving sobs during his vows. I was a little concerned that since is family was so drama-free that he might not have the taste for emotional chaos he'll get at the in-laws, but now I think he's up for it.

You might think that a joint Muslim / Christian wedding would be tricky, but the Bride wore a traditional gown and an ecumenical officiant did the ceremony. She didn't hide her faith, I'm glad to say. She explained a number of times that they were serving Kansas City barbeque, but only turkey and beef, not pork, because she's Muslim.

Tthe daughter of the Bride (below, left) did all the flowers and decorations. 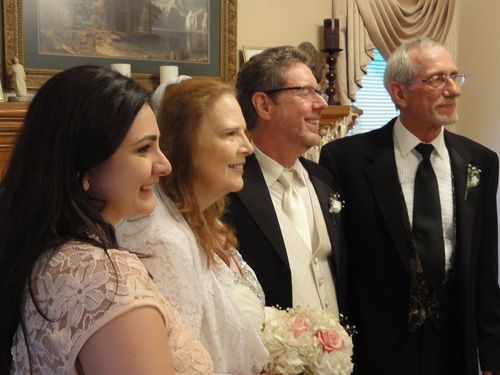 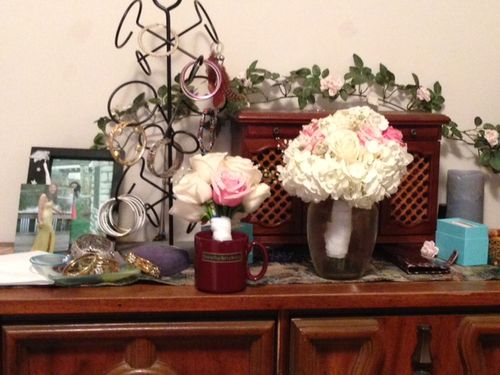 She made the wedding cake topper and the rose path as well. 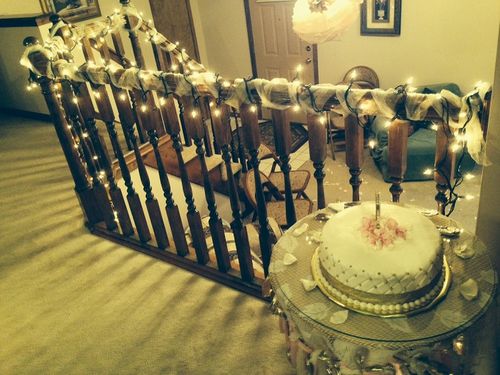 All in all, I think it was one of the best in-law weddings I've ever been to. They're well-suited to each other. 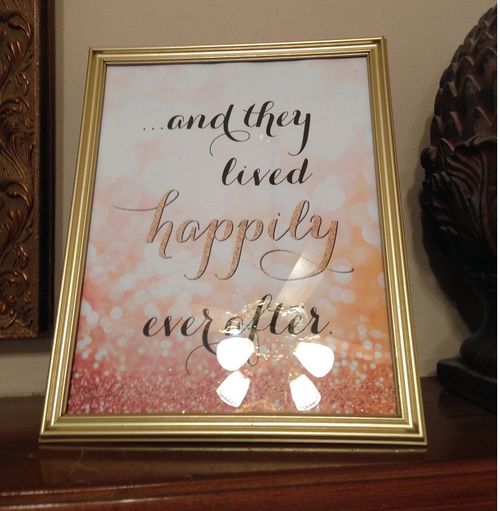 Last month I had dinner with my friend Carol. (Blog reference: supremely practical nurse friend who knew enough to recommend I see the doctor when I first had MS symptoms.)  I last saw Carol in ... 2010, I think. We were friends in high school, then kept up when she went away to college, she was maid of honor at my wedding, she moved to Dallas, and we still kept up. Then she came back to Saint Louis and moved three miles from me, and we started to lose touch. Then she moved fifteen miles away, and now we talk every four years or so. It's a shame. I love Carol.

All I would have to do is pick up the phone and call, but as I told her at dinner, "I always stop, because since you had cancer I think Dave's going to pick up and tell me you died months ago."

"I always think you're going to be in a wheelchair."

I'm invited to her daughter's wedding shower Sunday. I have a wheelchair. And I have a sick sense of humor. I don't think I could sell it, though. I'll have to wait about ten years, then I could pull off a fabulous practical joke.

And now, my friend from twenty years ago, Melanie, has moved back to Missouri and is in driving distance. (Blog reference: Melanie the actress/teacher who learns German and gets grants to follow her dreams.) The last time I spoke to Melanie was ... I don't even know. Twelve years ago? And again, it was a dinner after I hadn't seen her for four years. Since then I visited her at Northwestern, but recently I've just kept up with her through email newsletters and Facebook. In typical Melanie fashion she oriented the earth's axis to her goals: she took a job at Cornell and somehow visited Africa through that.

I think the job at Cornell required a cryptic Facebook account, because she never posted anything personal. She had a child twelve years ago, and of course my fear is that the child will be dead, or the marriage to the German will have ended.

The only downside here is that I am a full ninety pounds fatter than the last time she saw me. I wonder if she thinks I'll be in a wheelchair. I could totally sell the wheelchair joke with Melanie.