Give them new 'tools' for their favorite pastimes and hobbies. This might be a manicure set, drill bits or cooking utensils."

My gift to Gary

After he watched an episode of Martha Stewart Bakes, Gary was intrigued by the science of pies, and coveted Martha's extra long 18 inch rolling pin. He got that, plus the rubber spacers that keep the pie crust regular.

Friday night we made a pie crust by hand, and I wish it had been made with love, but instead it was made with acrimony and screaming. Still, Gary used his laser surface thermometer to ensure the dough temperature never dropped below 60 degrees (pie crust melting point) and it tasted tremendous.

We filled it with a Bob Evans strawberry pie knock-off recipe, bought a Bob Evans pie as a benchmark, and had a pie face-off. 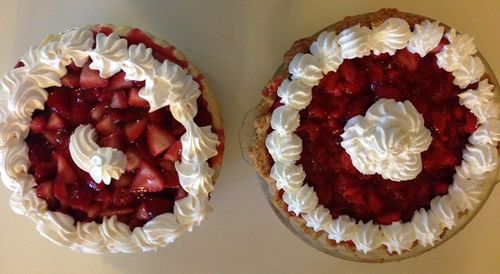 Our pie (on the right) won on crust and beauty, the Bob Evans pie won on filling.

Gary's gift to me

I wasn't impressed. Bulky. Inconvenient. Not discreet. And, a bit high-powered for me. I tucked it behind my mattress and neglected it for months. It wasn't even blog-worthy. 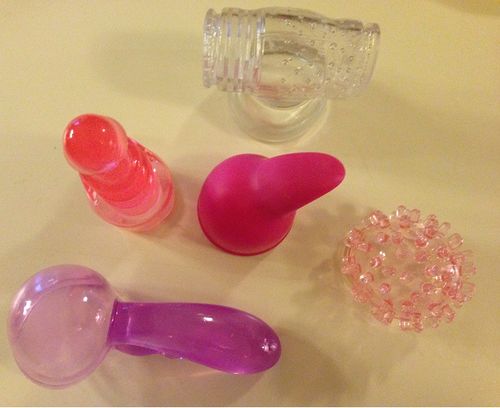 After using the attachments, I can fully endorse this machine. After the recent three year hiatus from sex, during which Gary valiantly tried to increase his stamina on his own, we both ended up in the same bed enjoying each other. And then the next night, and the next, and the next, (and then he gave me a night off because I was getting a vaginal ultrasound the next day), and then the next night – and then I came down with a bladder infection. (I blamed the ultrasound.)

(You may notice the photo includes one attachment I bought him. He was not a fan and remains a Luddite.)

I have owned Hitachi Magic Wands for years. They are the Rolls Royce of vibrators. Once you go Asian...well anyway I did not know there were attachments. No need as best as I can tell. The Asian lover has hit a home-run every time for me, no need to explore the world of attachments.
I do agree it is loud but I am sure I drown it out.

This is like a TMI O Henry story, but without the irony. You make this story somehow adorable.

Zayrina - Okay, here's more TMI. The party's always been in the yard in my ladygarden. If the party moves inside, sure, it's still a good party especially if you still have goings-on on the lawn, but as a host I have to divide my attention and I can't make it work. That is, until these attachments came along. Wow, it works. Great Gatsby level indoor and outdoor party.
Tami - It was sort of a role reversal version of the O. Henry story: if the man got the combs and the woman got the watch fob.

God I'm so low tech with my undying vibrator,vintage 1985. Guess it's time for an update!