Papier Mache is hard. (That's how Martha Stewart spells it, people. Maybe that's my problem.) I have encountered indestructible piñatas. I wanted my piñata to break at some point, but I ended up making it as thin as ... paper. As thin as my own uterus. So, now the basic structure's been dismantled and I've reinforced. Gotta bolster up my uterus.

It never occurred to me before but I've only ever seen a cross section of a uterus. Nine out of ten uterii on Google images look like this: 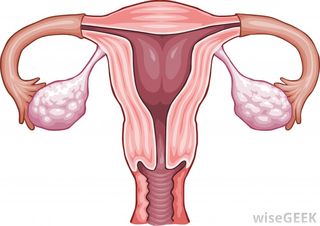 A real one does look like a balloon. I'm going to have to integrate the cross section in mine anyway, otherwise It just wont look like a uterus.

We have now added a tampon bonfire and Pin the Kotex on the Underwear to the festivities. The uterus piñatas has absorbed all my time, though. You'd think it could produce babies after all the research I've put into it.

As usual, I can only admire your understated good taste.

Hattie - I need to remember to post a photo of the Pin the Kotex to the Underwear game. There's a uterus chain over the fireplace too.