« I Am a Changed Woman | Main | The Con Artists are Out to Get Me: OR Suburban Paranoia »

In Which I Am Shocked 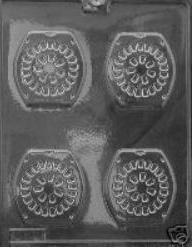 Imagine my surprise when I opened the padded envelope and pulled out a mold that did not look at all like birth control. It took a moment to figure out what it was, since the mold was concave and my brain had to interpret the convex form. I thought:

"This isn't what I ordered! What is it? It isn't round, it's ... kind of a pointy oval. It's sliced down the middle like a loaf of bread. Oval bread? With lips in the midd - Ack! Labia!"

Little labia lollipop molds, to be specific. One reason they were so hard to recognize is they were NOT to SCALE. They were life-sized for a ten year old. Perhaps that's what I found so shocking. It was daytime, I wasn't prepared for them, I was expecting birth control, and I got baby labia.

I felt a little outrage at first, but that dissipated, and my comment to the seller on eBay was a simple "I ordered birth control. You sent me labia."

We shall see what happens next.

Maybe whoever filled the order hadn't looked "down there" lately.

Hattie - If they did they might think they have 28 clitorii arranged in a circle.