I Play at Work

A few years ago I bought this off ThinkGeek. 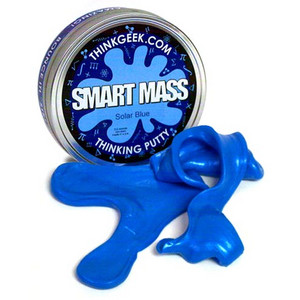 This putty is the reason that the boss of my boss thinks I'm good at my job. "That Ellen, she plays with that putty all day and she's so creative." I make putty penises and big blue balls. Whatever.

A guy at work saw me playing with the putty and confessed that his go-to cube toy is Buckyballs, so I had to buy a set of those.

They aren't good for mindlessly forming cubes and balls and phallic symbols, but if you are willing to pay attention you can assemble interesting shapes.

Of course, I am not willing to pay attention, so I usually make some easy shape and slap it on my metal cabinet. I had a nice little hexagon out there last week.

Before I returned Monday, Marcia had done this: 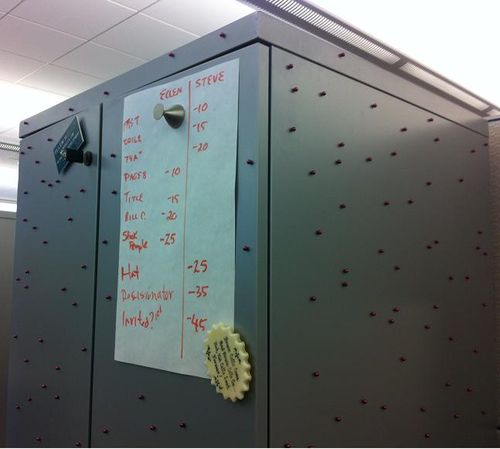 I had to leave it. Hilarious.

(The list on the cabinet: that's a tally of how many imaginary dollars I have lost in bets with Steve, and he has lost to me. The bets are boring, except for the Bill Cosby bet (Bill C, above) that you know about already.)

So, as soon as Steve and I heard Buckyballs were in danger, we had to buy some more, and they had to be the BuckyBigs, the ones that plug up kid's intestines, the ones they want to outlaw. 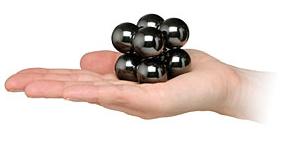 They have not yet arrived. Luckily, I also bought a toy made for me: magnetic putty. 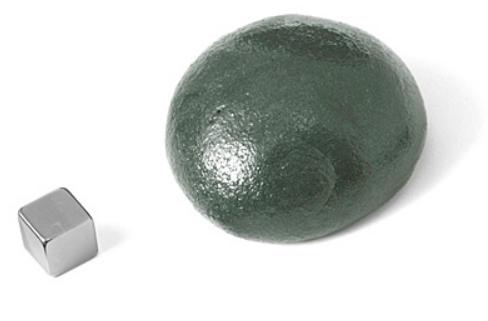 It's a magnet! It's a putty! It's a dessert topping! It's actually putty infused with metallic filings (so DON'T EAT IT KIDS) and a powerful cube magnet. They say you can leave the putty and magnet on your desk in the positions above, go to a meeting, and when you come back the putty will have engulfed the magnet.

Supposedly the putty is magnetic too; you can slap it on a metal cabinet and leave it there. Like I say, made for me.

This caused me to go off on a wild goose chase, in which I found this:
http://www.kjmagnetics.com/uses.asp

That magnetic putty seems very cool. I wonder if I could trust my co-workers to leave it at our conference table.

Magpie - Oh, that one is the best.
Amy in StL - could you trust them not to eat it?