I was listening to someone at work describe her recent vacation. She spent a week on the beach.  She explained she sat on the beach, then got in the water, then got out of the water. Re-applied sunscreen. Got a drink. When she dried off from the sun she got back in the water again. She didn't go to any museums. No fine dining. No sightseeing.

We resolved that she's a busy Mom and she never gets a chance to just relax, while I spend every weekend relaxing. I get out of bed, then spend a few hours in the guest bed, then I move to the couch, then I get a drink. It seems silly to do that somewhere else, so on vacation we visit museums. Gary argues that our house is pretty much like a tiny hotel, with the cable hookup and the cappuccino maker, so why go elsewhere to relax? Palm trees? Bears? Exotic wildlife?

The universe heard him and is now sending wildlife to our house. (No, not bears. )

We were leaving to get breakfast. We'd driven as far as the corner. I was talking.

"We can go to the Barnes and Noble after breakfast and - THAT is a DUCK."

Actually two ducks. Ducks jaywalking. I got out of the car and paparazzied those ducks. 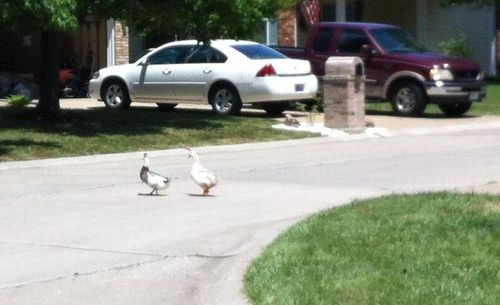 They were heading toward a neighbor's. He came out of his garage. I asked if those were his ducks.

"Nope.They've been wandering the neighborhood all morning."

I headed back to the car. Gary claimed the ducks were the same ones he'd seen outside the Starbucks last weekend. He'd mentioned it then because it was unusual. There's no duck pond nearby. I thought, "Man thinks he has stalker ducks," and said nothing.

When we drove off the ducks were headed to our house. 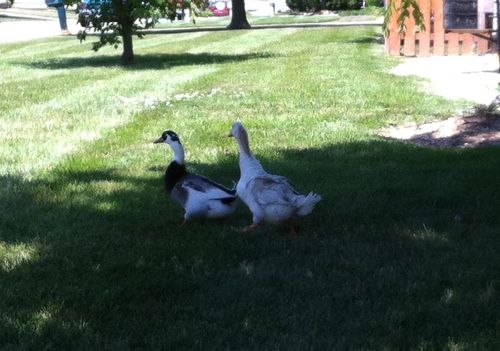 Sadly, the ducks were gone when we returned. I'm hoping they have been caught on camera heading for the nut feeder.

I'm sure tomorrow we'll wake up and a scenic mountain / waterfall / volcano will have moved to our back yard.

Posted at 01:01 AM in Miscellaneous Mockery | Permalink

Well, she must have gone to the beach without the kids; I can tell you that a beach vacation for a busy mom usually involves more work than does staying home.

My parents saw four adorable teenaged foxes up at the lake last week, but they failed to take photos.

Plus, they weren't being stalked-like-Gary.

And please stop verbing the nouns. You made me shudder, and that's not good for a Sunday. :p

For some reason, a wild turkey crosses my path or hangs out on my garden shed about once every decade. I didn't even know they could fly that high, but this one did.

There were 18 mallard ducks on the grass verge watching me go past on my walk yesterday. (This is probably the least interesting comment I've ever made.)(I hope.)

Suburbancorrepondent - Her kids are getting engaged and the like.
Curmudeonette - I LOVE the term "verbing!" It's a noun, used as a verb! I love those!
Becs - Those things are scary.
Big Dot - No, because it taught me the word verge. I think it's what we call a berm.