« Raccoon Spirit Guide | Main | I begin my date with myself »

I've never seen Gaslight before tonight. It spoke to me. Like Ingrid Bergman's character, I have been trapped in my house by my husband and I am going mental. 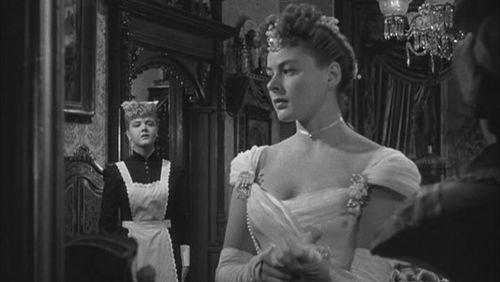 This is the scene when Ingrid tells her husband that she isn't "too tired" and she IS going out, even without him. She gets out of the house for a few hours before he jacks with her and she's back in the house again.

It's been three weeks since Gary and I have had plans to leave the house, much less the city, and every weekend Gary's been house-bound. Somehow I feel I should be house-bound too.

I can't put him on a plane till we know what's wrong, other than: his brain still hurts, his back's gone out, and his lungs aren't keeping up. Still, we've done the tests that would show he's about to drop dead, and he isn't about to drop dead. Hooray! Now get me out of this house.

So, inspired by Ingrid, when Gary heads out as far as his Mom's house tomorrow, I'm heading out ... somewhere. Perhaps to the restaurant where I planned to celebrate our belated anniversary. Maybe the contemporary art museum downtown. I don't know. And when he gets back from his Mom's I'll be right at his side. I just need a day out or I'll go nuts.

Posted at 01:46 AM in In Which We Mock Our Husband | Permalink

Really, girl, give yourself a break. The museum sounds wonderful. Go and buy an insanely expensive meal at the museum restaurant.

Oh, that movie creeps me out.

Sounds like a good plan - take care of yourself!

Becs - Well, I skipped the museum. I skipped the pedicure too. Still, loads of food, butterflies and shopping.
Surbancorrespondent - It was excellent, but yes, creepy. I missed
Mare - I did do that. Thanks.

Oooh, Gaslight. Haven't see that in years. It sounds like you had a good weekend to yourself.

Magpie - Well, technically it was just six hours to myself, not the whole weekend, but it was good.