« How to Deal With a Ridiculous First World Problem | Main | Divide Me In Half, Put Me in A Greased Bowl, Flip Once and Cover Me with a Clean Towel »

We got Ken and Wilma the Audubon bird camera for Christmas, and it has taken many entertaining photos of the four species of birds in their backyard.

At first we all fell into the "Christmas mouse" thinking - you see a mouse every couple of days in the winter; you think it's one mouse. "There's our Christmas mouse." When you have a seething mewling horde of two thousand vermin. 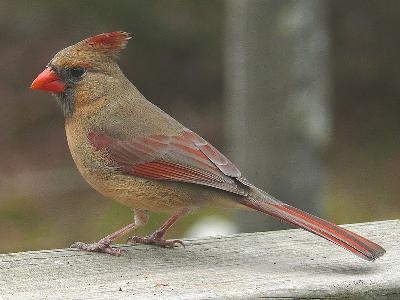 Then lo, we came upon a photo of a female cardinal that was a lot hotter than the others. 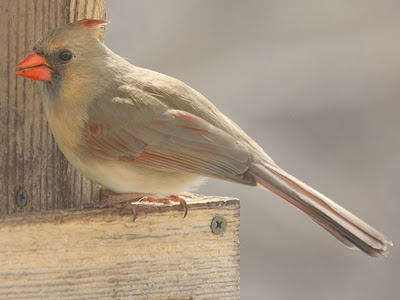 (These aren't the actual photos, but the best representations I could steal off the 'net.)

This new bird looked like a female cardinal who had been through the wash. She was at least 50% paler than the others. Wilma admired her greatly.

This killed me, because Ken is almost ninety and I think some leeway is allowed, and at least he didn't say "She's an octoroon!" We steered the language away from that shortly after.

It did make me wonder if you can breed birds like you breed horses and dogs. Or perhaps I have seen the legendary albino cardinal.

Can you have a mixed bird?

Yes, birds can be bred for color and feather length. Visit the fancy poultry barn at a large state agricultural fair.

In the wild they tend to be pretty standard, though, because birds are programmed to find certain features attractive in a mate, so any bird "off standard" might find difficulty mating.

That reminded me - The Man and I were feeding ducks on the Hudson River one day, brown wild ducks, when we noticed that one of the flock was a white domestic duck. She seemed to be quite accepted by the wild ducks. He thought that was wonderful, that a domestic duck had escaped and found acceptance in a wild flock.

A few weeks later, same place, same flock, and now the white duck was accompanied by a bunch of baby ducklings, all pintos - white with brown spots and brown with white spots. Made his day.

~~Silk - it's sad to think that our mixed race love-child of an egret and a cardinal may never find acceptance.
Tami - "quadroon" should be funnier, because of the "k" sound.
Hot Mom - Oh, I bet you'll see the female all the time now. They mate for life, I think.

The "hot" one could just be a youngster, but all cardinals are not created equal...go here for some typing fun - http://www.migrationresearch.org/mbo/id/noca.html

We have cardinals around here. They are not natives, but they are mighty happy in Hawaii. I must say I have never seen such a pale female cardinal.
Mulatto! That's funny. He meant albino?

Mare - That is fascinating! By the way, it seems starlings and a catbird have made their way to our area.
Hattie - Oh! I assumed he meant mullato, or mixed-race, but I bet he meant albino. That makes more sense!