... Friday's post was partly absorbed into the clouds, including the last line that said we'd be going to the Paula Poundstone concert later. Pretend you don't know that. Assume for today we just went to dinner.

First off, Farmhaus is a mere block from my Grandceils house, and if MoDot hadn't jacked up Jamieson I could have driven right past it. Odd to think the street behind the Krepps' is now trendy.

Next, it is tiny. 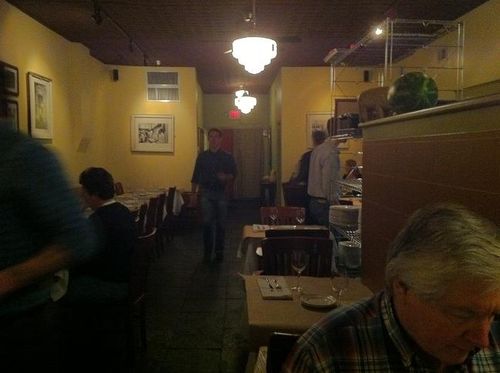 Do you see Gary? I'm taking the photo across from him and my arm and back are against the walls. There are two tables to the left of us and that's the whole place.

I know he looks grumpy. That's before he selected a glass of Riesling based entirely on its name: Kung Fu Girl Riesling. I even liked it.

We began with Nachos. Here's the actual menu description (my memory was a little off):

(Lardoons are square chunks of bacon.) 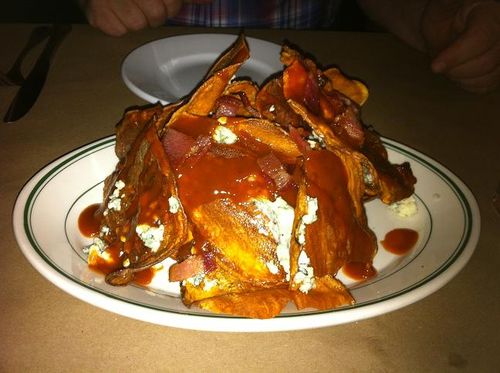 The chips were very fresh. All the cheeses were great. The ketchup was indeed tasty and you could tell it had fire-roasted tomatoes in it. I don't know why I looked at the description and didn't think, "This will taste like sweet potato chips with ketchup and blue cheese." And yet, it did. I opened my imagination and it was the best chips covered with the best cheese and the best ketchup, I will give you that. It was the best interpretation of chip / cheese / ketchup that could ever be. (This becomes a theme.)

Next, we both had salad:

We tied in to the salads before we took a proper photo. 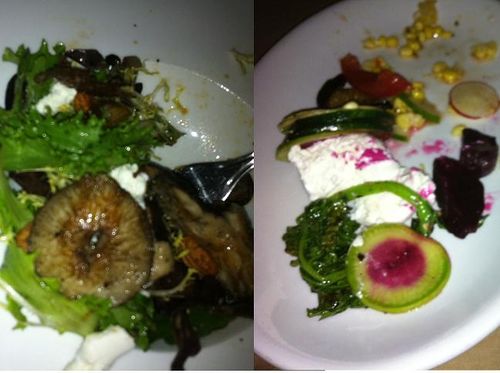 Salad of salads! Neo-platonic salad! And to think some of the greens are grown in a backyard near Granceil's. I was genetically predisposed to love the salads. Watermelon radish! Look at that! I can't even get brussel sprouts at the grocery anymore. If I had to make and ideal salad it would be based on these salads. I would travel for this salad.

Now, Eric our waiter (who I think got a shout out in the RFT Best Service Award) did explain that everything was fresh and local, except for the fish. He went on to explain the chef is a fish expert. I had already dismissed the fish and decided on meatloaf, because Gary like meatloaf and I figured I could trade.

Yeah, my own fault. I got only a bite of Gary's grouper (snicker) and had to eat all my meatloaf. People, I don't like meatloaf. I've always thought it was because I grew up with bad meatloaf. I thought this would be a meatloaf revelation. 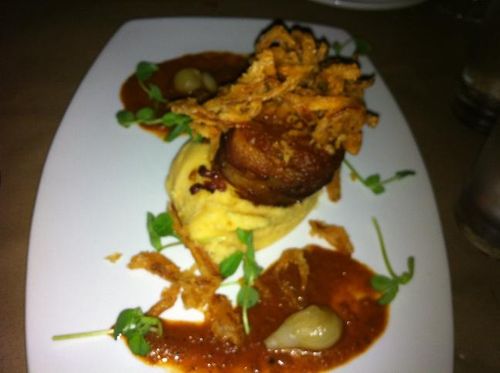 It was the very best meatloaf that could ever be (I told you it was a theme). So, it's not me. It's meatloaf. I suppose I always assume meatloaf is going to be as juicy as a burger, and it never is. Gary, the bastard, refused to trade mealoaf for grouper. 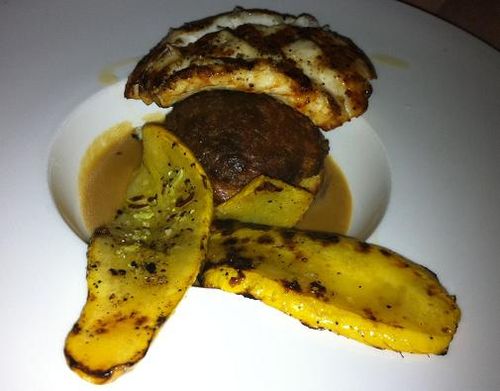 Jesus God. I LOVE GROUPER. Who knew? I only got one little scrap. I ate two spoonfuls of spoonbread and I grabbed some of the sauce with my finger before Gary could stop me. Eric explained later that this chef gets the fish FedExed to him, opens the box, sniffs it, looks the fish in the eye and if they look too old or feel too tough he refuses the package. I had no idea. I call that local.

Dessert was an off-the-menu glass of milk with pecan cake, pralines, and butterscotch ice cream, while Gary had a fried apple pie.  The ideal fried apple pie, of course, heaven, the fried apple pie all McDonalds customers older than 30 remember but only better.

So, go to Farmhaus and get the fish and the vegetables. Don't expect a conversion to pork belly if it doesn't already appeal to you. (That was my one wise decision, I said no to the pork belly, though I even said, "You know, maybe that pork belly I had before was overly fatty." Eric set me straight.)

Grouper, salad and cheese will be on my plate next time.

Bacon, bacon, and bacon? They're trying to kill you and make you say "Thank you"!

They can't be pretentious; they spell "lardons" with an extra "o". Yokels.

I love grouper, too. It's very delicious.

Grouper, yes, although just to add a wee soupcon of guilt to your feast, they are being overfished. But they are tasty.

The other stuff doesn't appeal to me. One tiny bit.

~~Silk - Not just bacon, pork belly too.
Tami - I had to ask the waiter what it was. Am I not pretentioous, then?
Becs - Oh, damn, Should have had the triggerfish then.

Grouper are being over-fished? Damn.

I didn't mention this, but "lardons" is just French for "large bacon bits".

Apparently I am more pretentious than thou.

Tami - Good work. It is hard to be more pretentious than I.