What Passes for Polite Dinner Conversation

I know the name now, but on Saturday I didn't, so for ten minutes the conversation stopped dead while everyone but me sunk into their iPhones. Except for Gary, who sunk into his Blackberry.

"It doesn't matter what his name is," I said, but they didn't care.

So I took a photo. 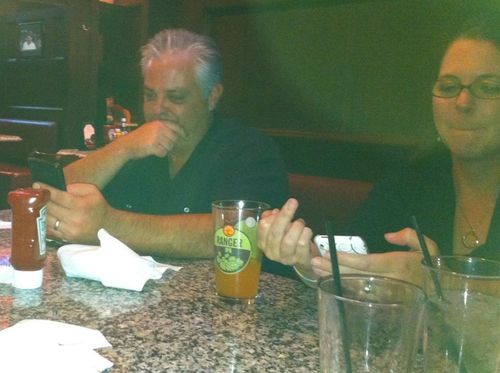 I should have just made up a name. I wish I'd realized that at the time. I also didn't realize Libby is flipping me off, AND biting her lips so she won't smile.

Posted at 12:46 AM in Miscellaneous Mockery | Permalink

I don't like Samuel R. Delaney. I've never been able to read one of his books and the few times I've heard him speak, it's obvious he thinks that he is all that and a dozen galaxies. Pfft.

my niece calls that "going to phones".

Never heard of him.

Do I not recall your boasting, in your early iPhone-owning days, of declaring "Let's ask Google" in similar circumstances?

Becs - I know! Still, Alan at work did say Delany is one of the few gay black science fiction authors. (I should have added, "Gay black obnoxious science fiction writers.")
Magpie - Adopting that phrase!
Tami - But, wouldn't you give UP after ten minutes?
Hattie - I hadn't before he disrupted my morning last weekend.
Big DOt - yes, well, just when I'm with Gary. We are less formal.

I wouldn't have to give up, I have magic Google foo.

Tami - and now I can add Google-foo (or Google-fu) to my vocabulary.

I used the two o's in honor of the spelling of "Google". Wait - googol also has two o's in a row.

Are you flipping us the bird in this pic?

Why am I the only one who's seen this?

Oh I see, it wasn't you. It was Libby. Kinda looked like you. Hey it's late. Sorry.

Tami - No, googol has 1,000 os in a row.
Benchmark - It is Libby, and thanks to me and Facebook her kids have seen that photo too. Oops.