I just watched the series finale of Rescue Me. It was just perfect. 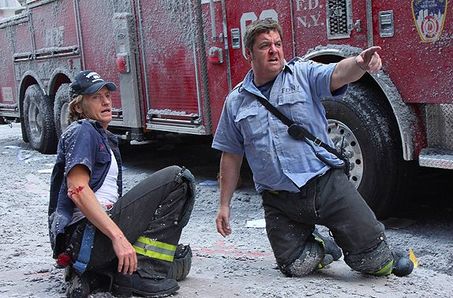 I think my favorite scene ever was from a few seasons ago. It featured the firefighters down at Ground Zero, just jawing about 9/11, and it turned into the funniest scene of the series. I laughed till I cried. I can't find a clip anywhere. Too bad, because it demonstrated the genius of this show. Everything dark is funny; all the humor is dark. You never know which way it will go. Always surprising.

The main character, Tommy, spent Season 1 talking to dead people he'd rescued, and his dead cousin. I think Season 2 he talked exclusively with Jesus. Season 3 we were back to dead people. One season was straight, until the last episode of that season, when all kinds of dead people showed up. Then there was the season with the fake-out nightmares: they had it timed so the instant you'd think, "No, really?" he'd wake up. Got me every single time. The last few seasons were the random hallucination seasons. Never saw that coming either.

So sad it's gone now. Such a good, good show.

Posted at 12:38 AM in Miscellaneous Mockery | Permalink

One of the best shows on television. I'll miss it too.

I look forward to watching all of it in an ill-advised Netflix marathon, as is my wont.

I hadn't seen the last few seasons, but when I saw the series finale was on last night I figured I should watch it. Maybe not the best idea now that I'm dating a city fireman - but it was a great show. The scene on the side of the road cracked me up!

I love this show so much. I haven't watched the last 3 episodes yet, because when I do it really will be over.

Dave2 - So good. And a former fireman friend vouches for its accuracy, even though he's never seen it. (He refuses. I assume it would bring his ghosts back.)
Tami - I have "Breaking Bad" on my TiVo queued up for a marathon.
Amy in StL - When he walks away from the box? Absolutley.
Kristie - Yeah. But you know, there are all kinds of internet-only scenes on the official web site. So it's like BNL B-sides, I can always listen to them when I am old.