It was working out to be a fine weekend. It was getting cooler, I got lots of sleep, and adventured to cafes unknown. We had an O'Fallon adventure.

BabyCakes. Wee little cupcakes with three parts each: the cupcake, the frosting, and the surprise inside. We got five, ate two, and froze three.

Ham n Eggs. Fried potatoes almost like my grandmother made. "Fried potatoes?" the young ones ask, "What are those?" And ... well ... I was going to link to Wikipedia here, only they don't seem to know. German Wikipedia shows "Bratkartoffeln," and that looks like Granceil's dish, only I can't read German. Here, a photo: 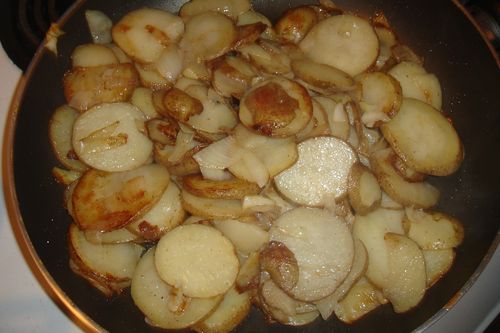 Those are about half done. Raw, partically. Picture those steamed for a hour and then fried into a crust, flipped, then fried to a crust on the other side.

I also drove back from O'Fallon on a new route, which was delightful. It was a lovely day of adventure. Gary was even reasonable.

He decided that what we really need to do for my birthday is go see the final Harry Potter movie. We didn't go this weekend, because I did not KNOW that I would have to PREPARE to see a damn movie.

1) I have seen none of the movies and read none of the books. Free time. I have it. This is how.
2) Gary says if I don't see part 1 of this movie, nothing will make sense.
3) The download of Pt 1 is in progress, so I will see that Monday. Before that, I have to study up on the mythology, otherwise he'll stop the TiVo every minute to say, "Oh, you don't know what Quidditch is! Quidditch is ..." (...some type of game? Right?)

Posted at 11:32 PM in In Which We Mock Our Husband | Permalink

I have learned the secret of fried potatoes: Buy canned potatoes. Slice them. Fry those puppies up and sprinkle some paprika over them just for show.

Fried potatoes sounds like rosti. If you want me to write you up a Harry Potter synopsis, just ask. I'm good at cutting stories down to the important bits.

Going in to Harry Potter, virtually blind? Tell Gary he's out of his mind. Still, I suppose you will be dragged out to see it. At least this way the heartbreaking scenes (this will mean nothing to you but Tonks and Remus Lupin side-by-side, sob!) won't be.

Becs - I have often wondered who eats canned potatoes. That sounds like they were made for fried potatoes.
Tami - The Cliffs notes took care of it.
Becs - Watched part 1 tonight. I didn't even cry when that rubber doll died.

Jared - it was very enjoyable. And a nice departure from other cupcake places.