Birthday: It's not just all about the food

Only, it is. Because the food was great! The rest of the day was not as good. 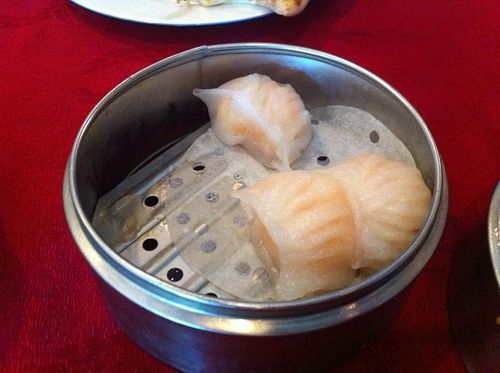 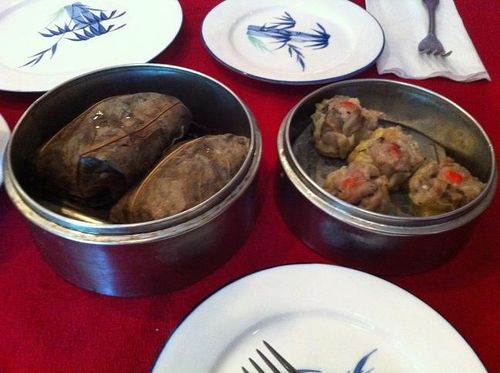 Not shown: Steamed Chicken Paws (feet) because the waiter refused to let us order them.

And the crowning glory: 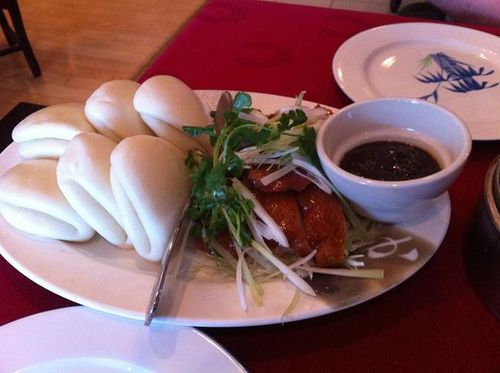 Peking duck with adorable little white buns and cabbage and Chinese parsley. WHICH IS CILANTRO. I thought cilantro was a South American thing, but no, China is also polluted by the foul weed. That was fine, because the Peking duck was not as delicious as the last time I had it. This duck did not require 24 hours notice, so it was suspect anyway.

The Rest of the Day
So, I dropped Gary off at his car and drove home (while Gary ran to the grocery and bought me more chocolate). I was in the garage at home, and I was outside the car, reached through to the back seat to get my box of leftover cake and DAMNIT.

Oh, and Poise Pad? Useless. Well, it protected the garage floor. I was not protected, nor the top half of my pants, which went into the washer AGAIN.

I think perhaps I got the signal from the neurologist's office that "this happens to everyone" because perhaps it does happen to everyone with MS. And there is nothing TO be done. I mean, I'd think they'd want to do more than rule out a bladder infection, or see if it is a neurological problem with voiding or a neurological problem with not voiding, or it it's a flare-up and not a symptom.

I sent an email, and I am just going to proceed without medical advice. So! New plan!

1. I had 2 hours of urine in there, so now I will make an attempt every hour. Perhaps I can empty myself out in tablespoons. HAH! My pee is measured out in coffee spoons! That's what that poem meant.

2. Diapers? I can't picture it. It isn't pride. Let's say I'm in the office, and I lose it in the diapers (because evidently just being vertical can provoke this.) So I go in to the bathroom, and I take OFF MY PANTS IN THE STALL. I can't even keep imagining to see what happens after that. Well, what comes next is someone else in the bathroom says, "Ellen, are you okay? Why are you taking off your pants?" The door doesn't come down to the floor, and by their shoes ye shall know them in the bathroom. (I do have a pair of sandals Marcia has, and when I wear them at work I wonder if people in the bathroom think I'm Marcia.) And then what happens to the diaper? I just can't see a practical scenario.

3. However, after a little research I am reminded of another alternative: the intermittent catheter. And if I had been undecided, this is what Wikipedia says about it:

"Intermittent catheterisation is considered the ‘gold-standard’ of care for bladder emptying."

Sold! Here's my new plan. Every day I pack disposable intermittent catheters (the priciest ones I can find) and use one every two hours and throw it away in the menstrual pad disposal container, because I haven't used that thing in thirty-two years and it is my right.

Upon further research, I find I will also have to pack water-based lube (which I HAVE on hand) and that "Female intermittent catheters are generally about six inches long and come in French sizes. The French sizes range from 8Fr-24Fr."

Yeah, I don't know. All I know is I will be writing my name in the snow at the first opportunity. If I don't need a presciption I'm just ordering a bunch of different sizes and trying them out this weekend.

I hope remain on different floors - and therefore using different bathrooms - until this experiment ends.

WEll, happy birthday. The food looked divine.
I don't mind cilantro myself but prefer Italian parsley, the flat kind.
So sorry about your continuing bathroom problems. I have a friend going through this, and she thinks we don't know about her problem.
Another problem with a diaper is that it adds bulk, and that is why she doesn't want to wear one. She leaves wet spots around, which is kind of sad. I want to tell her, hey, we understand, but she is very proud. And I understand that too.

May I suggest? Go to a urologist if you haven't already been doing catheterization. I understand it takes some practice to get it right.

Don't ask how I know, but a diaper will not hold a full load of pee.

I can put a pull-up depends on someone without taking off their pants. Learned it from a nurse's aide. I will write a description if you will try it.

Perhaps skirts would be safer and easier to work with than slacks.

I went through a period of about a year, several years ago, with the no-warning leakage. I believe it was due to a pinched nerve in my back (I have a weak lower back). I used maxi Poise, clenched thighs (Kegels clench only the back side of the urethra, so don't really do it when the nerves aren't cooperating), and long skirts.

Catheters may not help because even if you empty the bladder completely every fifteen minutes, there'll be a few ounces more within minutes, and that's all it takes.

Zayrina - we want that description anyway! I can't imagine it. I can get a bra on and off under clothing, through the sleeves, but I can't figure out how one would get panties on and off under slacks, let alone a diaper. Leave it as a comment on my blog if you like.

how you got from chicken feet to catheters is amazing.

Magpie it is like the bra,but not messier because the sides of a pull up are designed to be ripped apart easily so you can quickly remove the soiled brief without removing pants. Then you simply step through the brief with one foot and pull the brief up. They are very strechy so it is easy to stretch it down the other pant leg then over the foot. Voila. The aides manage to do it with dazzling speed and zero mess.

Queen I do hope you are pulling our collective legs about the catheters. Good way to get a blistering infection among other things. There is some education needed first.

Caroline - Are you suggesting I am experimenting with peeing on myself?
Hattie - Maybe she would like intermittent catheters. I know a lot of people with MS use them. Of course, how to tell her?
Becs - Good to know about the load. I have always suspected.
Zayrina - Okay, if the sides are meant to be ripped, why couldn't you rip both sides and then pull it up through the waistband as if it were a cloth diaper? Or is it a mess, gravity-wise?
Silk - Until those cute little slouchy ankle-hiding elf-boots come back, I can't wear skirts. A long skirt over the ankles would need something like a venetian blind cord to get it up promptly.
Magpie - Both the chicken feet and the catheters were equally on my mind.
Zayrina - No, I meant it about the catheters! GOLD STANDARD, BABY! And I was thinking of disposables, too. However, peeing every hour seems to work well. Five minutes of that hour is spent waiting for the pee, so it will slow me down, but there you have it.

Kind of balancing out Colin, isn't it?

Have to confess to the odd episode of bladderly over-eagerness myself - usually moments away from the loo, especially if I encounter an unexpected obstruction in removing the knickers. Need something like those strip-tease artists have: one yank and the entire trousers are gone.

The sides aren't velcro. If you rip them and put them on I suppose they could float about unanchored.

Big Dot - Well, yes. Only Colin has the courtesy to give me at least a one-minute warning. This thing sneaks up and there is no time to prepare.
Zayrina - Oh, I am an idiot. I began to read your decription and a few words in became convinced you were talking about how to get them off (because getting them on - impossible!). And of course that wasn't it at all, and now I read it again and it makes total sense. If they are really stretchy. I feel better about diapers. But are diapers the Gold Standard? I think not.